Welcome to an exclusive collection of townhomes coming to animate this Brampton neighbourhood.

Bridle Trail Urban Towns is a new townhome development by Your Home Developments in Brampton. The towns will be located at 4316 Ebenezer Road backing onto the gorgeous William Hostrawer Valley.

The towns will feature stunning two-storey and bungalow style townhome units. This enclave will sit close to many picturesque green spaces making it desirable for young couples and growing families alike. 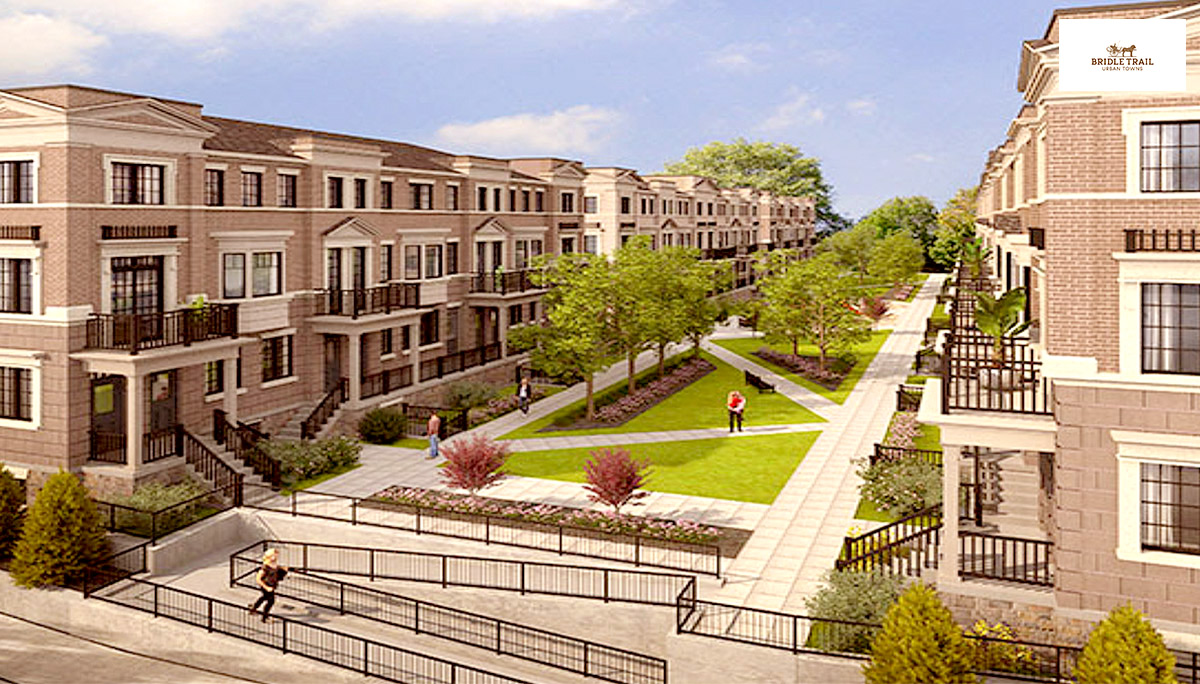 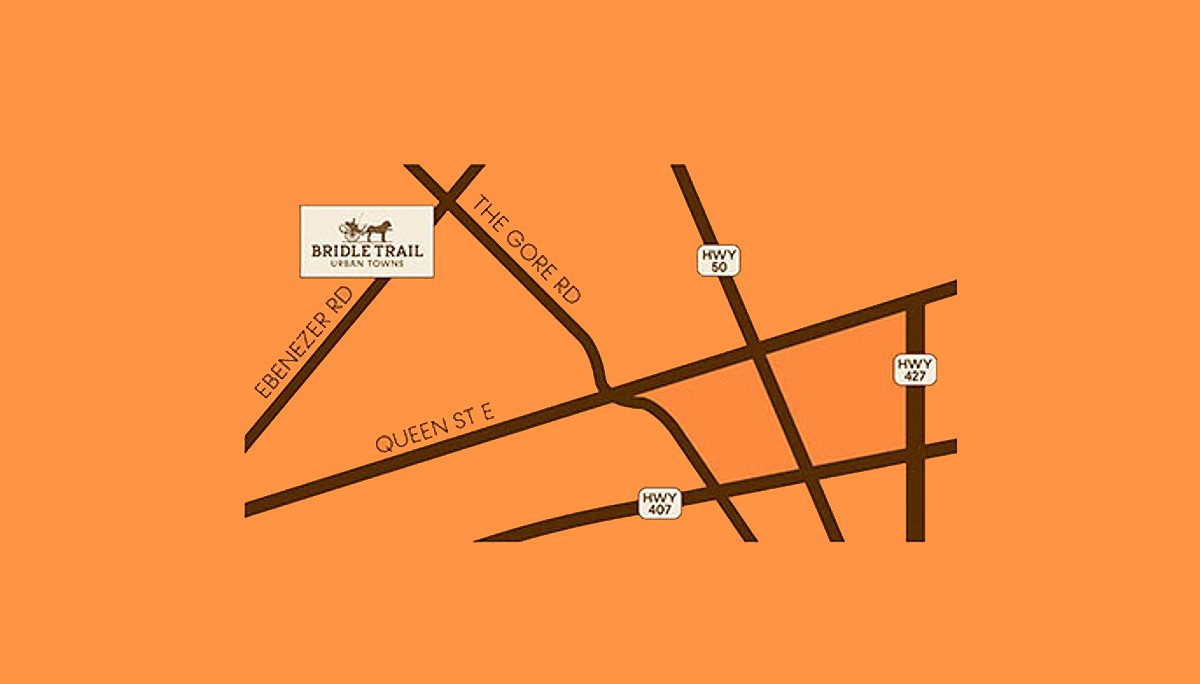 Bridle Trail Urban Towns will be available in 78 stacked townhome units ranging in size from one-bedroom to two-bedroom units. The homes will come in two-storey and bungalow style urban towns featuring modern and contemporary designs.

This development will be built in a safe community in Brampton surrounded by schools, parks and urban amenities. 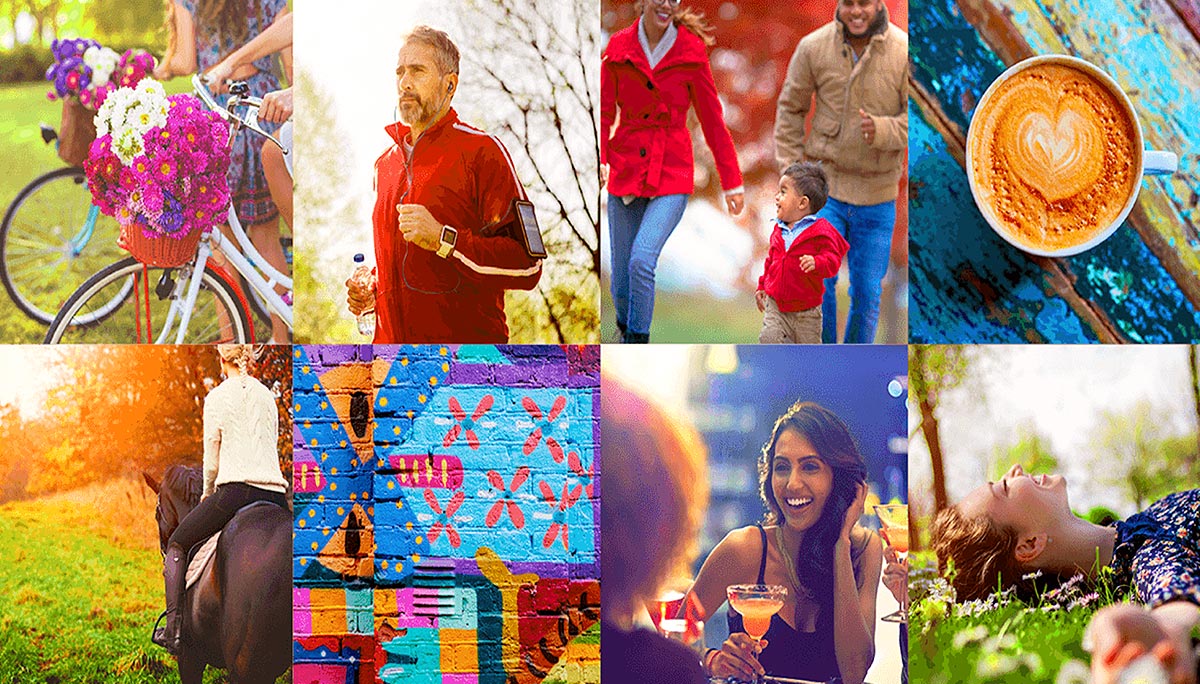 We can expect the homes to feature open-concept layouts and spacious rooms to promote socializing and balanced lifestyles. The units will also feature large windows and doors providing optimal natural light to create bright and breathable rooms with views of the lush green outdoors.

We can also expect the homes to contain balconies and/or terraces providing residents with private amenity areas where they can come to read a book and relax. The enclave or urban homes will also feature a landscaped courtyard with sidewalks allowing residents to enjoy the fresh air in the privacy of their exclusive residency.

We can expect each home to include the capacity to fit two cars including one in the garage and one in the driveway. Additionally, the development should also include visitor parking. 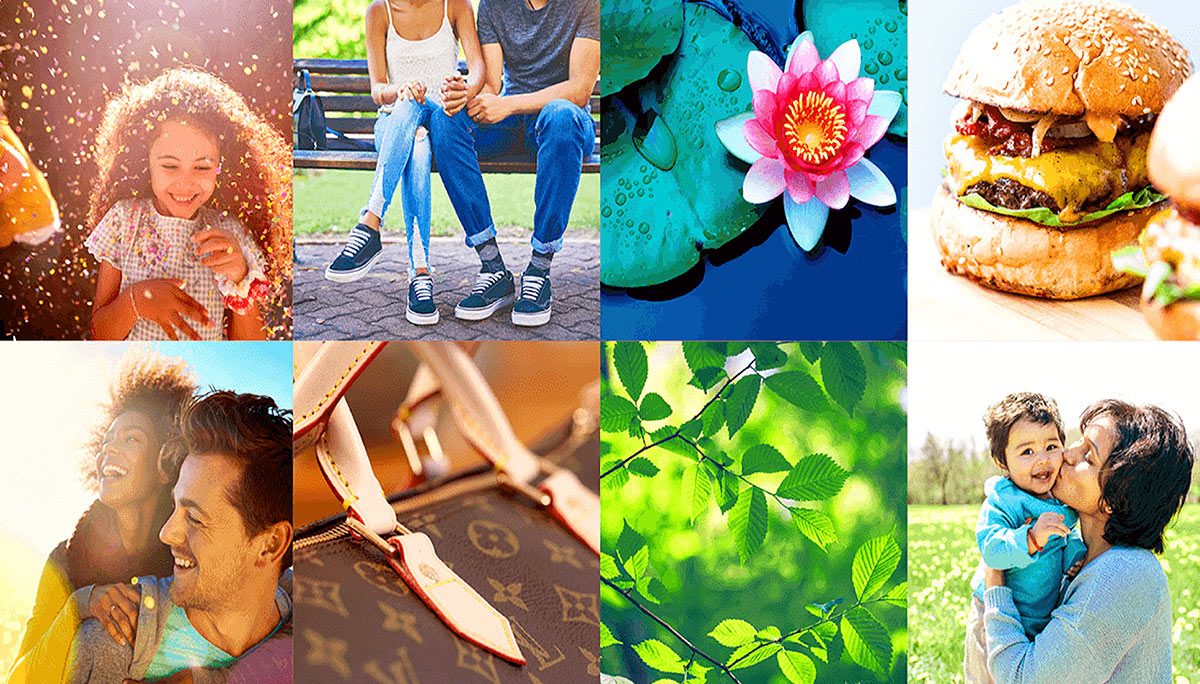 Each home will feature dark and neutral hues with a mix of stone blocks and traditional brick, complemented by black accents and rails. We can also expect this development to come with many modern features and finishes. For more information, register with us today.

This town fully connects you to every possible amenity while nestled in the heart of nature.

Bridle Trail Urban Towns is located in the centre of parks, conservation areas, urban amenities, schools and everything Brampton has to offer. Located at 4316 Ebenezer Road in East Brampton you can expect to find a family-friendly neighbourhood with everyday conveniences found nearby.
Families will be able to benefit from the abundance of nearby schools, eateries, cafes and bars, entertainment complexes, diverse cultural offers, retail and fashion outlets found in the region.

Parks and green spaces in the area include the expansive Claireville Conservation Area filled with trails and a ravine system to explore; the Claireville Ranch, Minaker Park, Crystalview Park and Patrick O’Leary Park just to name a few. The development is also backed onto the William Hostrawser Valley providing scenic views, walking trails and a picturesque place to call home.

This development sits extremely close to major routes including Queen Street East which connects with Highway 7, 427, 407, 27 and many other important highways. Travelling in and out of adjacent municipalities has never been easier with a plethora of major thoroughfares found within minutes. Plus, these homes sit right on the border of Brampton and Woodbridge meaning you don’t have to travel far into the city to reach home, in fact, you can reach home from downtown Toronto in as little as 35 minutes. Investors and first-time homeowners can benefit from its proximity to Toronto.

Not to mention, travelling around Brampton is made effective via Brampton Transit’s Zum; a rapid bus route that provides service along Queen Street and Highway 7 from downtown Brampton to York University, along Main Street from Sandalwood to Square One in Mississauga and along Steeles from Brampton Gateway Terminal to Humber College. Brampton Transit also connects with Mississauga’s MiWay and the TTC making your commute via public transit easier and more convenient.

The City of Brampton has over 600,000 residents, and it is expected to rise exponentially in the next 25 years. The Province of Ontario has designated it as an urban growth area, and by 2031, the population is expected to grow to 725,000. It is one of Canada’s largest and fastest-growing municipalities, meaning we can expect more condominiums and townhomes to continue expanding the region.

This development is strategically located in a family-oriented, residential, neighbourhood in the middle of it all. With incredible connections to everyday amenities and an ideal place to live in, we can’t think of a reason not to invest in these enviable homes.

Your Home Developments is a real estate developer that has spent many years creating beautiful homes in some of the most established neighbourhoods in the GTA. They take pride in their work and they believe in building finely-crafted homes that their clients will absolutely enjoy. They believe homes are more than just brick and mortar, they are a place to learn, grow and make memories.