No one has done more to influence the identity of Toronto than Cadillac Fairview Corporation. This is one of the most influential developers in the history of Canada. It built and currently owns such institutions as Toronto’s Eaton Centre, Calgary’s Chinook Centre, and Vancouver’s Pacific Centre. Born out of the merging of two real estate giants, this company was destined to become great.

Cadillac was formed when three friends, Eph Diamond, Joseph Berman, and Jack Kamin agreed to work together in 1953. The company was named after Jack’s car, meant to elicit class and company trust. Their timing was perfect as this was the time of North America’s baby boom, and people needed homes. 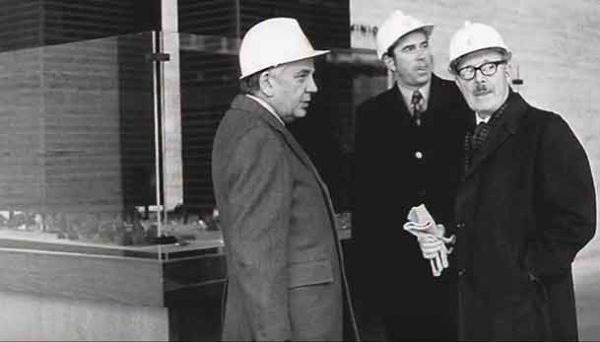 They began building apartment buildings in Guelph, and instituted many innovative amenities that come standard in today’s residential towers. These things include exercise rooms, underground parking, and individually controlled heating and air conditioning controls. These are things that are often taken for granted in modern urban living, but not so back in the 50’s!

Fairview was becoming a behemoth of its own. After a string of impressive successes, they partnered up with Toronto Dominion Bank to construct the TD Centre - a project with the aim of becoming the largest office complex in the country at the time. In the beginning, they only planned on building one tower with 1 million square feet of floorspace, but by its completion, the project was four towers and comprised of 4 million square feet of floorspace.

This project was innovative in its own right as it employed the use of tinted glass, and an underground shopping facility, two features that are part of the very fabric of Toronto today.

These companies merged after a joint venture of buying out the Canadian Equity and Development Company. They bought them out to acquire the 80,000 acres of land that was in today’s Erin Mills region. In the beginning, there were some problems because Erin Mills didn’t have a municipality, and the companies stepped on each others toes, but in 1974 the two companies merged and teamed up with the T. Eaton Company to build the Pacific Centre in Vancouver, and the Eaton Centre in Toronto.

After some restructuring and streamlining through the tumultuous recessions of the early 80’s and early 90’s, they finally went up for sale as a private company in 1999, and were purchased by an unlikely buyer. The Ontario Teachers’ Pension Plan bought the company flat out, and now own it exclusively as a subsidiary. Teachers’ is continuing this developers record of success. Today they own 73 properties, 38 million square feet of floor space, and are worth $296 billion. They are so successful that they’re able to take calculated risks when good opportunities arise. They recently announced that they’re going to build at 16 Yonge despite having no pre-release tenants. This is typically a risky move, but with the area’s vacancy rate at 1.5%, they’re confident that they’ll be able to find tenants when the time comes.

Its long term success can be partly attributed to the interior culture this developer has been able to facilitate. They were named Greater Toronto’s Top Employer in 2016 and 2017, and one of the Best Employers in Canada in 2014 and 2015 by Aon Hewitt. They were also named as one of Canada’s Greenest Employers in 2016. These are awards this developer holds with pride as they have proven that long term success can be obtained while treating your employees and planet with respect.

This company has become a giant in the country’s real estate industry. Although they had to relinquish their U.S. holdings during hard times in the 1980’s they recently expanded into Brazil. This is a company that promotes hard work and ingenuity, and has been consistently recognized as one of the best companies to work for in Canada. Moving on, they’re sure to continue acquiring and building iconic institutions.

This shimmering tower has defined the landscape around it as it surges towards the sky at 55 storeys. It is nestled at the apex of two of Toronto’s most sought after neighbourhoods - the Entertainment District and the Harbourfront. These condos are a proud home for many modern urbanites who enjoy gourmet restaurants and boutique shopping. Amenities include a sauna, steam room, pool, and jacuzzi. It is located at 12 York Street and it was completed in 2014.

The Residences at Ritz Carlton

Few places offer this kind of luxury living in downtown Toronto. The central location of these condos provide easy access to anywhere in the city, including subway stops, boutique shops, and gourmet restaurants. Amenities include an exercise room, pool, lounge, and concierge. It is located at 183 Wellington Street W., and construction was completed in 2011.