This new condo building will occupy a 7.5-acre site at the corner of Eglinton Avenue West and Wincott Drive, which is already home to a small shopping centre.

Richview Square Condos is a pre-construction development proposed for Etobicoke by Trinity Development Group and CreateTO. The team has yet to release an occupancy date, so be sure to register with us for the latest updates on this exciting redevelopment.

This project involves the modernization of an existing retail plaza, the addition of three new mixed-use buildings and a significant public realm improvement, with a focus on open spaces, walkability and a public square suitable for festivals or farmer’s markets. With a design by CORE Architects, it’s expected to be a thoroughly modern addition this desirable neighbourhood. 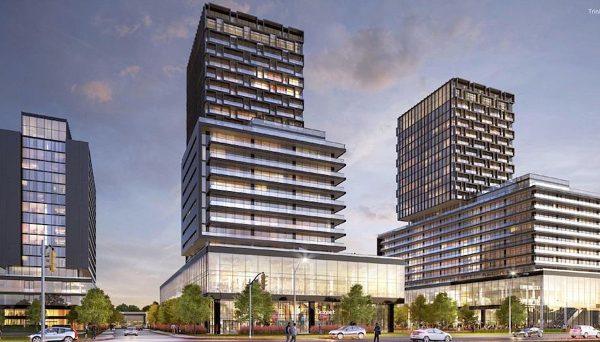 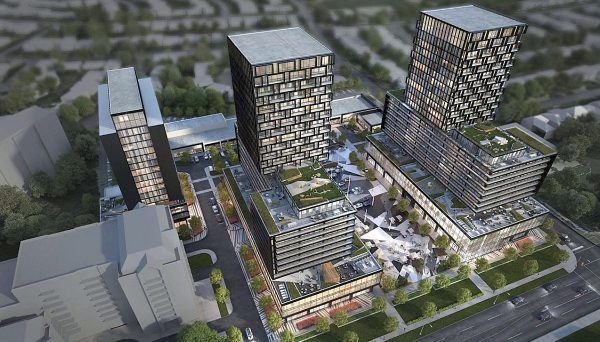 Under the new proposal, the mall will receive an upgrade, while the site will see some exciting new additions. These include three new, mixed-use buildings which will incorporate a combination of residential, retail and office space. Two of the buildings will front onto Eglinton Avenue, acting as distinctive landmarks on the stretch, while the third will sit farther back on the western portion of the site.

Details about unit mix, dimensions and amenity space breakdown have yet to be released, but the renderings – produced by CORE Architects – show a gorgeous selection of light-filled podiums and contemporary glazed towers.

The developers have indicated they’re planning to focus on an enhanced retail experience for the community that not only integrates residential living, but open space, modern architecture, a pedestrian-first design, added trees and extended sidewalks. A public square would anchor the community, allowing space for festivals, markets and outdoor gathering.

More space for small to medium-scale retail would be added in a way that seamlessly integrates into the neighbourhood, making this redevelopment a major focal point in the neighbourhood for shopping, dining and socializing. Living here means being in the center of it all.

Etobicoke condos give the keen investor a chance to be part of a thriving region that’s growing significantly in some stretches. Already home to a busy corporate and manufacturing sector, we’re seeing an influx of young, technology-focused companies choosing to move their head offices into the area, drawn by its array of amenities and proximity to Toronto. It was also recently announced that two film production facilities will be built in the region, bringing even more jobs to this west end suburb.

The region’s main arteries – Highways 401 and 427, the QEW and the Gardiner Expressway – make it easy to access most of the GTA efficiently, with downtown Toronto being only a 30-minute commute by car, or a 40-minute commute using public transit.

The condominium site is close to some of Etobicoke’s golf and country clubs, including the world-renowned St. George’s, as well as several parks, which are commonplace throughout the region. Schools and recreation facilities are plentiful too, making it a popular district for growing families.

Etobicoke even has its own waterfront, where you’ll find yacht clubs, a pedestrian promenade and the expansive Colonel Samuel Smith Park, a popular place for ice skating in the winter and wildlife watching in the summer.
Shopping, dining, greenspace and lake access? Condos in Etobicoke have so much to offer and are in high demand by a wide range of residents.

Trinity Development is a branch of Trinity Group, a large-scale firm that focuses on real estate development, construction and property management. For over 20 years they’ve created a combination of retail and mixed-use projects across Canada, focusing on spaces that integrate into their respective communities and contribute to the surrounding areas both in terms of convenience and aesthetic.

CreateTO is a branch of the City that was created to develop their underutilized assets. Their projects range from trendy warehouse conversions to modern office buildings and residential high-rises. They often partner with private developers for their projects, playing a key role in the analysis and planning for each of their sites based on comprehensive market research.