TEK Tower Kitchener is a new high-rise luxury condominium by IN8 Developments in Kitchener. This 44-storey high-rise pre-construction condo is located at 30 Francis St S, by the intersection of Victoria Street South and King Street West. TEK Condos will feature 530 units with mixed layouts ranging from 352 - 884 square feet.

This condo property has plenty of amenities space providing superior living arrangements for its residents. 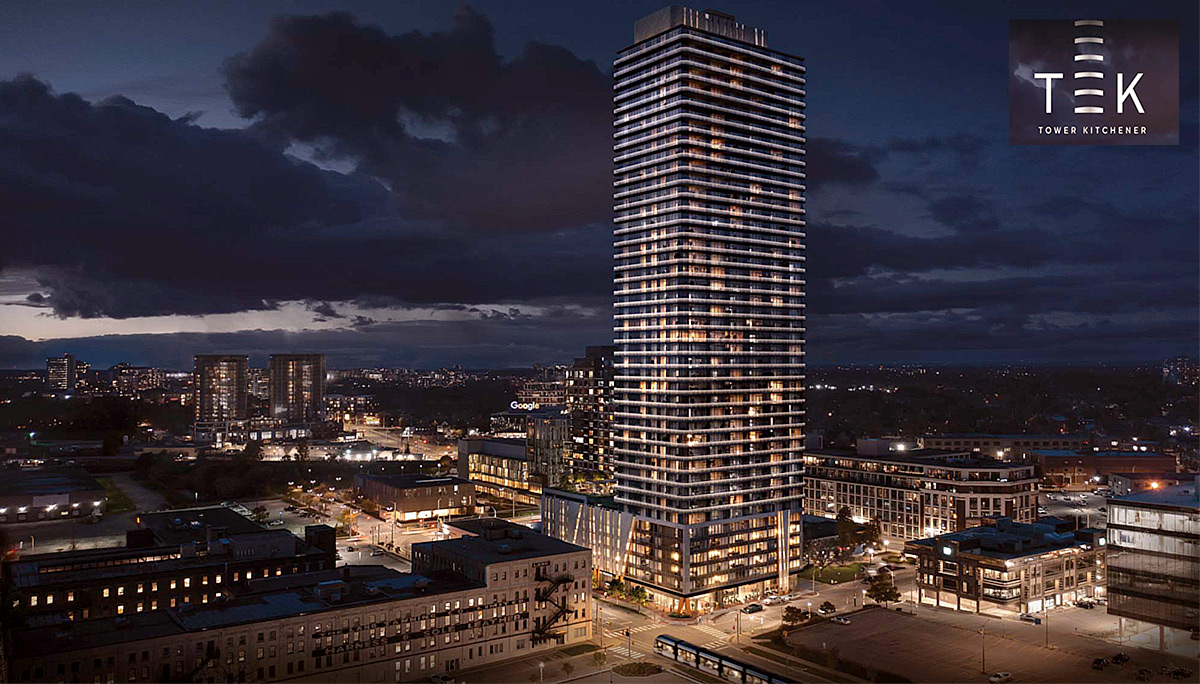 TEK Tower Kitchener will feature exceptionally designed exteriors, modern finishes and high-quality furnishes. The 366,193-square-foot project includes many unit types that are both attractive and barrier-free, inviting a wide-range of homebuyers and investors.

TEK Condos will sit on a 6-storey podium that houses a lobby, lounge and amenity space located at grade. The main entrance will front onto Francis Street and will be found adjacent to 2,000 square foot Fitness Centre on the ground floor featuring treadmills, bikes, machines, free weights, and a yoga studio. 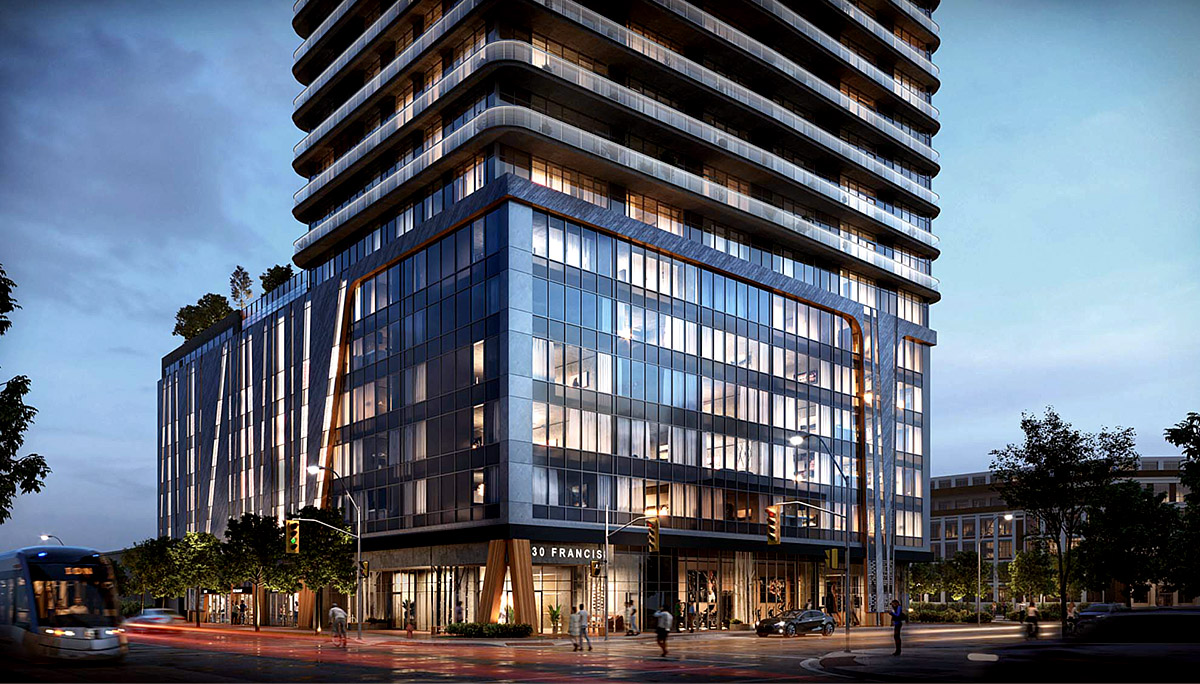 An additional 12,000 square feet of outdoor amenity space will be located at the 7th level – where residents will have access to an expansive outdoor park perfect for getting together with friends and family to enjoy the scenic views of the city. This outdoor terrace will be outfitted with cabana firepits, dynamic landscaping with large trees, bar and lounge area, BBQ and private dining space. 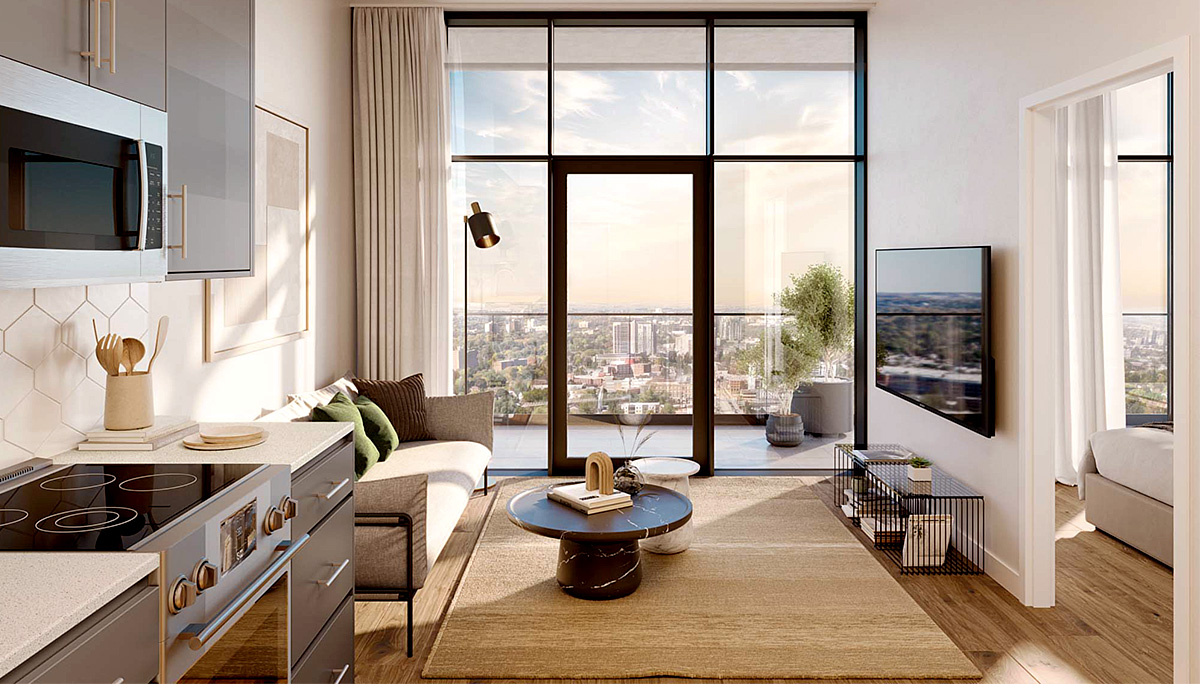 The units located in the tower, starting from the seventh floor and up, will all feature ample balconies so residents can bask in their own private space.

Contemporary and stylish suites will feature 9’-10’ ceilings and designer finishes. Gorgeous Swiss laminate will be provided in the main rooms, porcelain tile in the bathrooms and quartz countertops in both the kitchens and bathrooms. 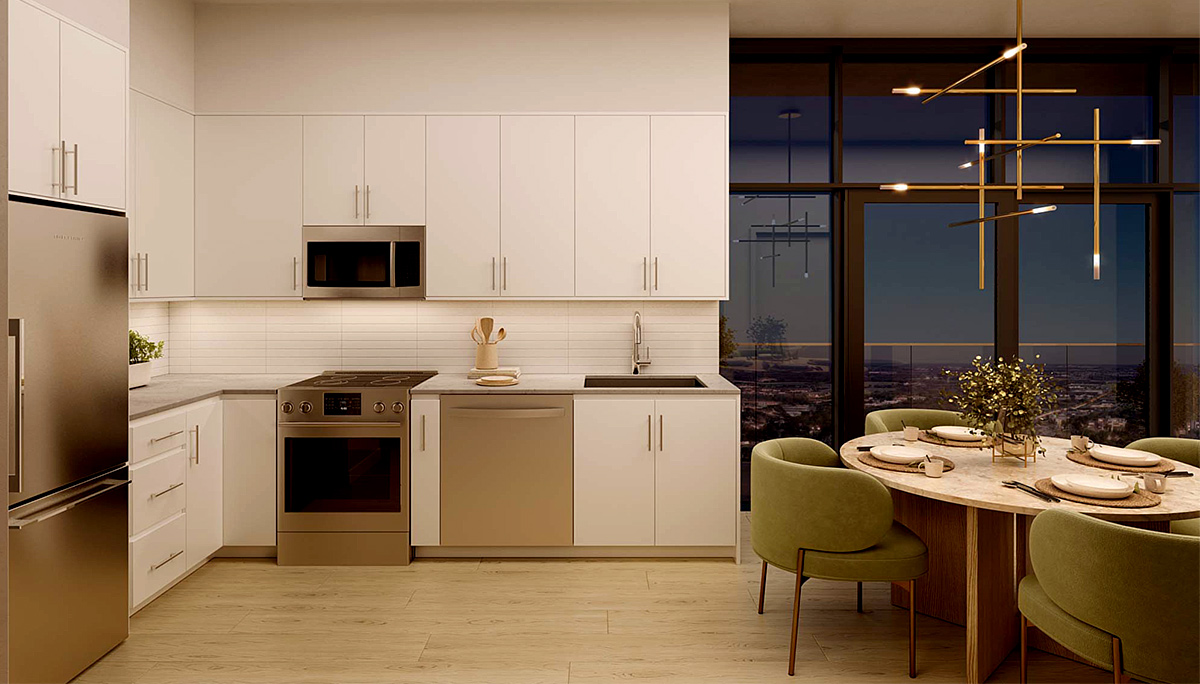 The kitchens will feature contemporary designs equipped with top-of-the-line Stainless steel refrigerators, slide-in range microwave and built-in dishwashers. Not to mention, each unit will include a convenient washer and dryer making luxury condo living all the more enjoyable.

Each TEK Tower Kitchener suite will be thoughtfully outfitted with a Smart Door allowing secured entry to your unit with the press of a button from your smartphone, automated lighting with customizable lighting scenes to set the mood for your unit any time of day; and a Smart Thermostat with the ability to automate the temperature of your unit. 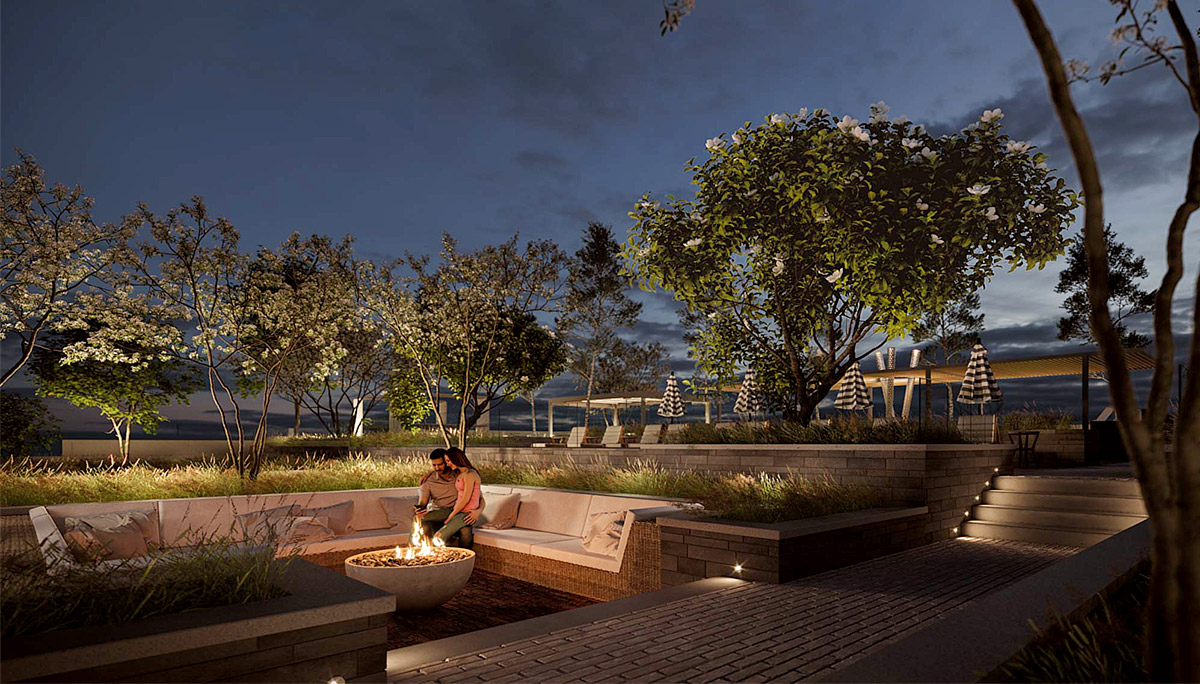 The proposal includes a generous 6-level above-ground parking garage with 204 vehicular parking spaces. There is both indoor and outdoor bicycle parking supplied on the site, totaling 148 spaces.

Two indoor storage rooms for resident use are included on the underground parking level, accommodating 135 bicycles. Further, outdoor racks for short-term use are located on the south side fronting Charles Street, accommodating the remaining spaces.

TEK Tower Kitchener will have gleaming exteriors further enriching the Kitchener skyline and improving the public realm. Its clear-glass and spandrel panels will complement nicely with the wood-grain panel creating a vibrant, eye-catching edifice. 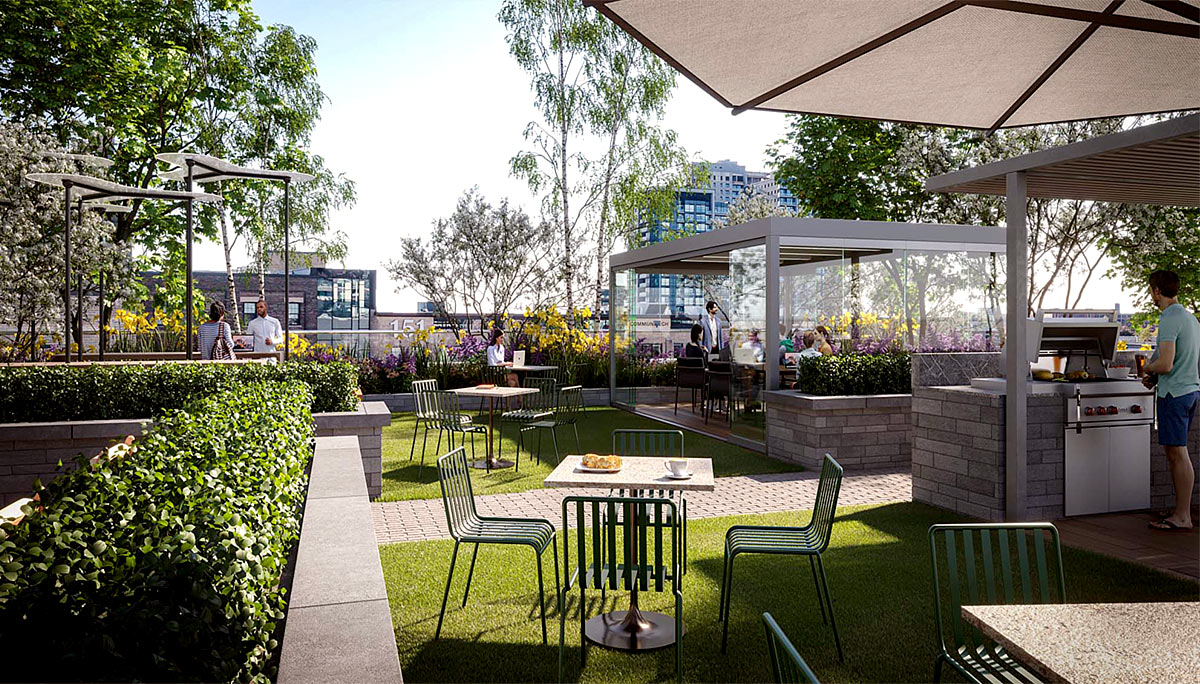 This city’s downtown area is a focal point for intensification within Kitchener and is expected to become more dense and transit-oriented within the coming years. This region has been undergoing intense transfigurations further making this a highly-desired area for investment.

Travelling in this area by foot, bike or car is exceptionally simple as this address is well-connected and blossoming with rural amenities.

Within walking distance residences can have access to significant locations such as the Kitchener Public Library, City Hall, the Museum, and Centre in the Square– the largest venue in the Waterloo Region known for its incredible Kitchener-Waterloo Symphony performances.

This area is also home to many schooling options from elementary to post-secondary options available in close range. King Edward Public School and Kitchener Waterloo Collegiate and Vocational School and the University of Waterloo can be found in as little as 10 minutes. Having said that, this condo can be an excellent residence spot for prospective students looking to attend the University.

TEK Tower Kitchener residents will also be in close proximity to many green spaces and recreational facilities including Francis Green, Walter Park, Victoria Park and the Iron Horse Trail.

Commuting in the area is hassle-free as this condo sits just seconds away from Grand River Transit stops, servicing King Street West, Victoria Street South and Charles Street West. The proposed condo is located approximately 180 metres south of the existing iON Light Rail service along Victoria Street, and sits just a 3-minute-walk to the Central iON Station. Travelling will be made even more convenient with the planning of a new transit hub located just 500 metres from the condo site. The region has planned a transit hub where GO transit regional train and bus services, via rail, LRT, and other ground-oriented transit will converge with the surrounding pedestrian and cyclist network. This site already scores a 86/100 walking score and a 93/100 bike score which can only go up once the new infrastructure is completed.

Kitchener is a city booming with potential as it increasingly builds toward the future. This city which is considered a manufacturing hub has diversified its economy to become one of the most thriving cities in the region. Kitchener has become one of Southern Ontario’s tech industry centres as well; TEK Tower will sit just minutes away from the Google Headquarters and the Tannery tech incubator.

Investors should consider that the real estate development coming to this region is immense. This city is already seeing exponential growth and it is only expected to increase within the near future. TEK Tower Kitchener will be adding 100’s of residents, jobs and opportunities for anyone who chooses to invest here.

IN8 Developments is a real estate developer dominating the primarily Waterloo region. Through 20 years of experience in the development and tech industries, they have learned to value the importance of quality craftsmanship, stunning design, and premium locations.