Right at the centre of a diverse and growing city where restaurants, bars, shops, and energy are aplenty is Young Condos at City Centre. The striking architecture of downtown Kitchener will have some competition with the introduction of this new pre-construction condo.

The John Forsyth Building is a remarkable Art Deco heritage building that has been preserved as a part of the proposed residences. This unique collaboration of old and new is an ode to the Victorian structures in the area. Glass and brick-clad exteriors are paired to bring both contemporary and classic elements together.

Young Condos At City Centre in Kitchener is a slice of art in the busy city.

Ideally positioned at King West and Young Street in Kitchener, this project makes a fantastic investment opportunity. Easily one of Kitchener’s most desirable neighbourhoods for young professionals, urbanites and students, the district continues to grow and modernize while maintaining its historic charm. 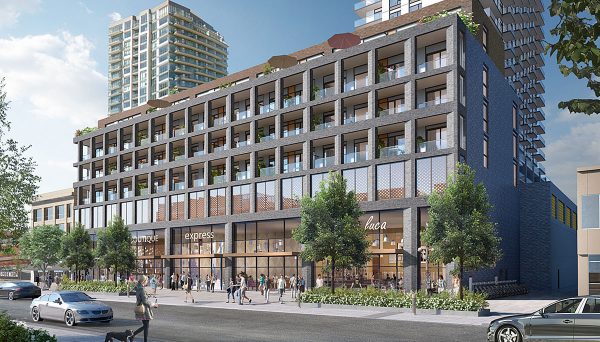 Seasoned developer, Andrin Homes believes that living and cost savings do go together—and because of this stance, this new development will feature an array of affordable floor plan layouts and sustainable features. Suites in this building will range from a collection of 1 bedroom suites starting from 504 square feet to 2-bedroom plus dens ranging up to 1,163 square feet.

All suites will feature Smart LED lighting throughout which will use less energy and last longer too. Another energy and cost-saving feature is the high-efficiency heat pump for each unit. Smart, young living is all about sustainability and caring for the environment while making a difference to your pocketbook at the same time.

First impressions are important, so Andrin has incorporated a distinguished lobby with designer décor and sleek modern furnishings. This builder also understands the importance of a healthy lifestyle and the desire for variety when it comes to workout regiments. The extensive fitness facility will include a scenic rooftop running track that follows the contours of the building. Enjoy spectacular views as you make laps around the track. The building's Extreme Fitness Zone features kickboxing, TRX, a Spin Room and an outdoor yoga space.

Additional building amenities include a carwash bay, a pet wash station, indoor Bike Room with tools and air pumps. Bike storage will be available for every unit and private indoor and outdoor dining will be available for whichever mood you are in. The 3rd floor will feature a beautiful sunbathing terrace. Alternatively, the 5th floor will feature a terrace lounge with BBQ’s. Students and working professionals alike will enjoy the convenience of having a co-working space located on the ground floor and parents of little ones will surely enjoy having access to an indoor stroller storage area. This builder has considered the many stages of a young adult's life. From post-secondary school to working in the city and starting a family. The location, living spaces, amenities and much more couldn't be more tailored for any lifestyle. If you are looking for a thoughtfully designed living destination that is full of energy, and in the heartbeat of Kitchener, this is it!

This new pre-construction condo makes for a great option for young professionals, families and those who love the idea of living in a self-sufficient neighbourhood that’s close to both employment hubs and entertainment. Downtown exemplifies an urban identity with arts, culture, recreation and commercial spaces that contribute to an excellent quality of life for all citizens. Young Condos is right at the heart of what makes Kitchener-Waterloo a top location for real estate investment.

Kitchener condo sales for the first half of 2018 are up by 93% vs last year. In comparison to the soaring downtown Toronto and GTA condo prices, buyers are looking at Kitchener for more bang for their buck. The latest forecast by Real Estate Investment Network (REIN) puts Kitchener - Waterloo – Cambridge among the top places to invest in the next 5 years.

The economy in this region is strong with world-class high-tech companies like Google just a 15-minute walk away from Young Condos. Biotech firms and industry leaders like LABS, KIK, Shopify and much more are also located just minutes from the new development’s address, 120 King Street West. The area surrounding the project is known as “Silicon Valley of the North”.

The booming tech industry here saw 8,400 new tech jobs added in a span of 5 years and this number continues to grow monumentally each year. Young professionals and new graduates are looking towards this neighbourhood to lay down roots and for good reason. The unemployment rate is 5.1% which is way below the national average. Powerhouse tech companies are attracting young professionals at a phenomenal rate.

The medical industry is also starting to emerge as a major economic driver in the city, as two medical campuses have recently opened up in the area. University of Waterloo School of Pharmacy and McMaster University Michael G. DeGroote School of Medicine are both in the city’s limits, as well as Grand River Hospital, St Mary’s General Hospital, and Cambridge Memorial Hospital. This is a city a smart investor shouldn't stand on the sidelines of any longer. There is a lot to offer here and the opportunity to be a part of it is right in front of you.

This address has a spectacular Walk Score of 96/100. This means that daily errands do not require a car. One can walk to local amenities like grocery stores, pharmacies, hair salons, and many other everyday destinations. For going further distances, motorists will enjoy living next to a few highway networks. The Conestoga Parkway is ideal for commuting locally, while it connects to other highways, including the 401 Ontario Expressway.

GO Transit provides a more extended public transit option and is located a mere 5 minutes away from the new development. The GO is one of the best ways to travel to other parts of the GTA. Additional public transit for the area is the local bus which offers 10 different bus routes for travel in and around Kitchener - Waterloo and Cambridge.

Kitchener and Waterloo recently announced an exciting development coming to the region. The ION Light Rail Transit System will offer a high-speed connection between Kitchener and Waterloo. This is expected to drastically improve the public transit in the region, as well as further improve the interconnectedness of the two major cities. With so many local transit options, as well as easy access to the 401, getting around is easy in Kitchener.

As a part of  Ontario's 4th largest metro area,   the demand for rental housing is up 7%. This region has the fastest increasing rental rate in Canada with a vacancy rate of 1.9% which needs to support students attending  the 5 educational institutions in the city, The University of Waterloo, Wilfrid Laurier University, Conestoga College, McMaster University, Perimeter Institute, as well as employees of over 1,000 new tech firms now operating in the area. There is a lot of opportunity for the savvy investor looking to invest in Waterloo. This location is as fantastic as an option for investors as it is for first-time buyers looking to set down roots in one of the region’s most exciting pockets.

The vision of Andrin is to bring quality, affordability and well-designed homes to the Greater Toronto marketplace while providing excellent customer service. From low-rise single-family homes, to semis and townhouses, to mid-rise conversion, to sophisticated high-rise buildings, our company strives for excellence in design, location, and workmanship. This is evident in the many thousands of homes they have built throughout numerous communities in the region. Andrin is a BILD Award finalist and the winner of the Housing Excellence Award from the Canadian Home Builders’ Association as well as a number of other industry accolades.