Eight Cedarland is a new high-rise condominium by H & W Developments in Markham. This new pre-construction condo is located at 8 Cedarland Dr. DIALOG Design Architects is the partner in this project. Eight Cedarland Condos has an occupancy date of 2022.

The suburbs of the GTA are growing rapidly, becoming urban centres in their own right-- and what better place to invest than a city on a constant rise? This suburb is showing no sign of slowing, and this exciting development reflects that.

It’s time to invest in a city that has seen ample developments in years past and shows promise of consistent growth in the future-- this is the perfect project to start with. 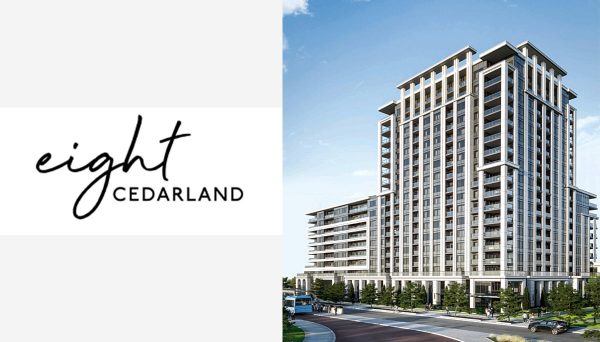 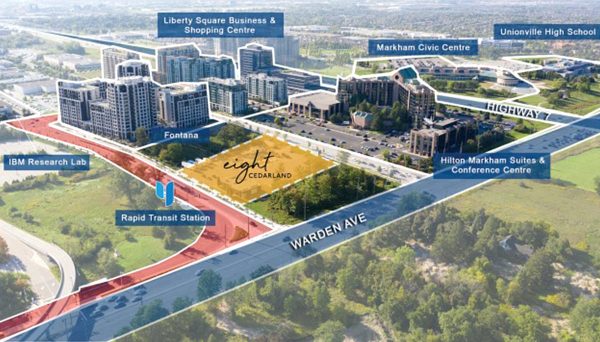 Eight Cedarland building’s sleek and sophisticated design is a harmonious union of exquisite design detail and modern conveniences due to its top-of-the-line amenities. For this construction, DIALOG is inspired by neoclassical architecture with sweeping archways and a hidden courtyard garden landscaped by Schollen & Company Inc.

Large floor-to-ceiling windows share facade space with private balconies, which are anticipated for the project to simply add to its already minimalist glassy look. It’s hard to beat the stunning, trendy aesthetic of the development.

Inside, the interior design team, Tomas Pearce, have assembled meticulously designed amenity spaces for residents and their guests to enjoy. 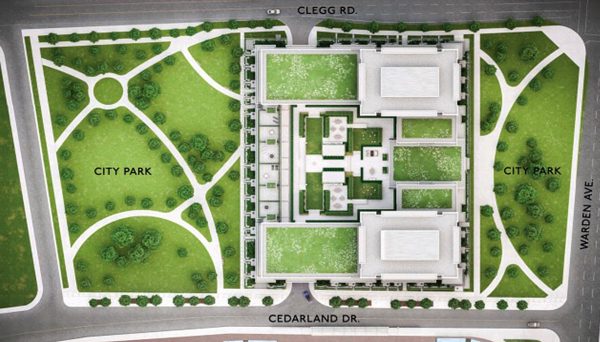 For those who enjoy some competitive fun in their free-time, the entertainment & games room is available for a wide array of exciting activities. Stay fit at the building’s yoga & dance studio while the little ones, enjoy the kid’s play lounge. Outdoors, the patio grill station features private cabanas for rest and relaxation. The pet spa comes equipped with pet washing stations and grooming areas. Eight Cedarland Condos will promise to introduce ease and opulence into your life.

Situated in the core area of an expanding business district, Eight Cedarland will be ideal because of its location in the high-tech capital of Canada. It is home to over 100,000 high-tech and life science companies such as IBM, Lenovo, AT&T, Xerox, Toshiba, Bell, McAfee, HP and much much more. New and planned commercial buildings are Aviva Canada’s Head Office, GM Technical Centre, Honeywell Building Solution, and Howland Green Business Centre. This explains why Markham is recognized as the highest concentration of high-tech employment per capita amongst Canadian cities, including Toronto, Ottawa, and Waterloo. The city still has much in store; Digital Markham is a preliminary strategy facility by the City of Markham with the objective to integrate digital technologies to enhance city operations & services, which makes Markham the first smart city in Ontario.

Eight Cedarland Condos is also in close proximity to York University, Seneca College, and top-ranked public and private schools. Unionville High School is ranked in the top 20 High Schools in Ontario. It’s most well known for its enriched arts program. York University is ranked as the top 8 Universities in Canada as it’s the third largest university with 4,200 students projected to enrol by 2025.
Seneca is Canada’s largest college with 100,000 students spread across its 10 campuses in Toronto and York Region.

For those who consider themselves “outdoorsy” and enjoy taking full advantage of all their neighbourhood has to offer, this locale is surrounded by 203 parks, 151 km of trails and pathways, 7 libraries, 32 community centres, 9 golf courses and 10 ice-rinks.

Shopping and entertainment are also just outside the door with over 500+ restaurants, coffee shops and bars. There’s also over 200 + shops including international retailers, multiple culturally diverse art galleries and historical heritage buildings supported by the city of Markham. With all that is happening in Markham, it’s no surprise that the average resale price in Markham has increased 142% over the past 10 years.

Simply put, transit in the area is impeccable. Getting around is a breeze as commuters have their choice at TTC bus routes, VIVA bus routes and GO Transit. Motorists have direct access to Highway 404, 407 and 7 for getting to work or play in any region across Ontario. Eight Cedarland re-defines the comfort of coming home while the Town of Markham makes it just so easy to enjoy all it has to offer.

This developer strives to build iconic communities that will endure through the ages and go on to become neighbourhood landmarks. They’ve committed to aesthetic excellence which helps them create enduring developments as they push the boundaries with each project. They have developed partnerships with recognizable and award-winning organizations like In2ition Realty, IBI Group, Desjardins, and Aird & Berlis to name a few.