Canary District, A New Address Is Shaping Up In West Don Lands

Meet one of the east end’s most anticipated revitalizations, Canary District. This mixed-use community near downtown Toronto has already made headlines and snagged industry awards, including BILD’s Community of the Year designation in 2014 and a Canadian Architect Award of Excellence.

Nestled around the intersection of Front Street and Cherry Street, the community is just north of the waterfront and just east of Toronto’s Distillery District in the rapidly revitalizing West Don Lands neighbourhood.

Dundee Kilmer Developments has partnered with Waterfront Toronto for this project, a true mixed-use, master-planned community, with every element designed to be open, inclusive and sustainable. Front Street – running east to west – is considered the central backbone of the area, and has been reimagined into an extra-wide, tree-lined pedestrian promenade. Green spaces, courtyards and lush pedestrian paths are maximized here, for a neighbourhood that is walkable and sustainable. Front Street’s extension will also establish a connection to downtown, the Distillery District, Lake Ontario, and the brand-new, 18-acre Corktown Commons.

Canary District is designed to optimize urban livability, the community has been thoughtfully planned to include access to fresh air, natural light, picturesque views, amenities, public transit and a mix of both public and private space. This thoughtful planning had earned the community a LEED Gold designation and meets all requirements of Toronto’s Mandatory Green Building standards, meaning residents can live, work, play and create in a completely self-sufficient enclave.

The long-underutilized land near the Don River was originally developed to house visiting athletes for the 2015 Pan American Games, but since then it’s undergone another facelift to welcome permanent residents. It’s now home to several stylish mid-rise condominiums, a brand-new YMCA, a student residence for George Brown College and an abundance of shops and cafes. The developers also allocated a block to affordable rental housing, creating a truly diverse community.

One of the district’s biggest perks is the 18-acre Corktown Commons, which borders the development. The park is a great spot to meet your new neighbours, hang out with the kids or just unwind after a long day. The expansive green space features a marsh, acres of lawn, a playground and splash pad for kids and outdoor fireplaces with communal picnic tables.

When you call the Canary District home, not only do you live in a fabulous community, but you’re within walking distance of trendy neighbourhoods such as King Street East and Leslieville. A short streetcar ride along either Front or King takes you right into the heart of downtown Toronto. 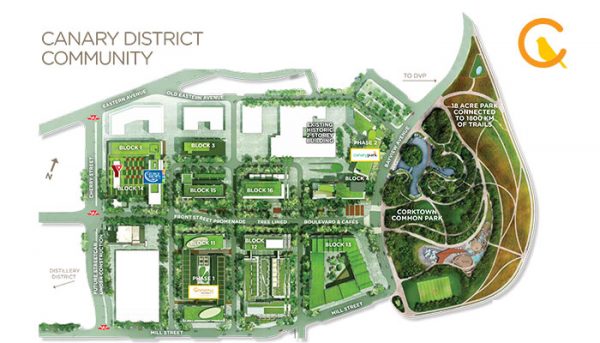 Suites in Canary’s condominium buildings are the epitome of affordable luxury, and range from efficient 400 square foot studios to three-bedroom-plus-den terrace units that start at 1,300 square feet. They feature contemporary finishes, smart layouts and floor-to-ceiling windows that showcase stunning views of Lake Ontario, the Don Valley and the downtown skyline.

The Kilmer Group has been building Ontario infrastructure for three generations and this West Don Lands development is arguably one of their most high-profile projects in recent years. After submitting proposals to redevelop the space, the province awarded them rights to the project and they have since won several awards for their work in the West Don Lands area. They also maintain several investment partnerships in the infrastructure, real estate, sports and media industries.

This developments is part of the Kilmer Group, a corporation that’s been building infrastructure throughout Ontario for three generations. After being awarded the rights to develop much of the West Donlands space, their work with Canary District has earned them numerous accolades, including BILD’s Community of the Year in 2014 and the National Association of Home Builders 2013 Urban Community of the Year award.