Why Should You Invest In Cambridge Real Estate?

Cambridge is a thriving city that’s located within the municipality of Waterloo. This city is filled with scenic nature, urban amenities and unique historical architecture. However, it wasn’t until 1973 that Cambridge was considered a city in the province of Ontario. It was incorporated into a city when the three municipalities of Galt, Preston and Hespeler were amalgamated into one single entity.

These communities have a longstanding history that dates back to the 1700s, which means that residents here will find buildings all around the city with historical architecture that dates back hundreds of years. 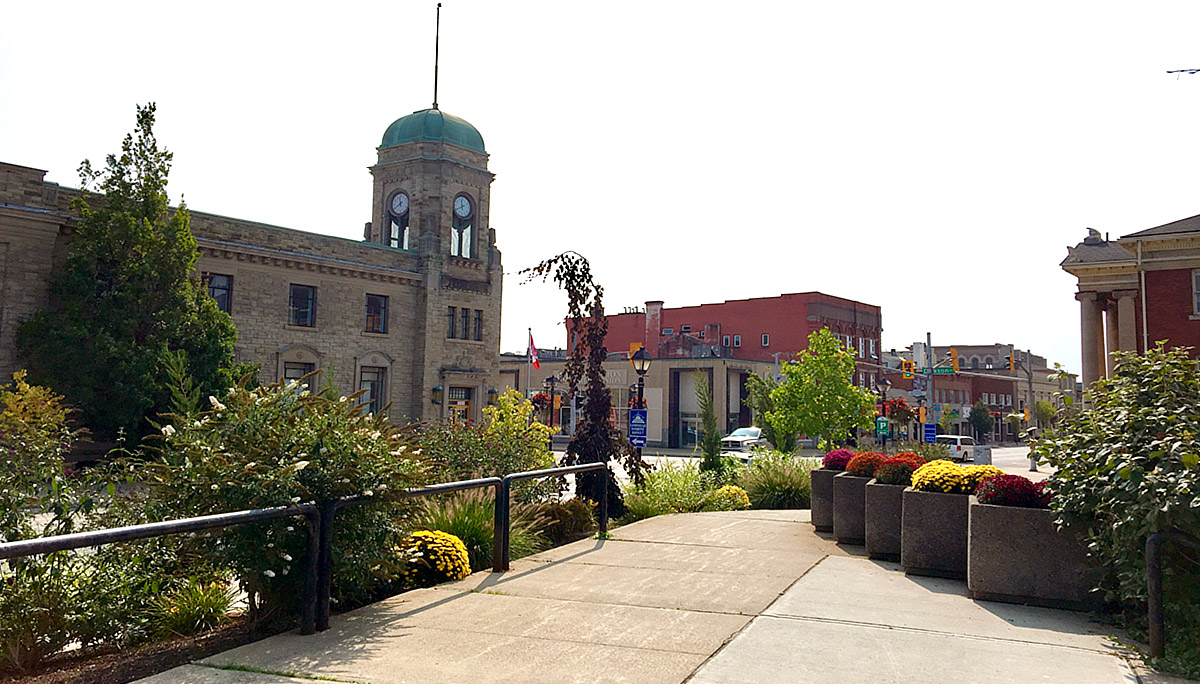 Today, Cambridge is a vibrant and transforming city that has a population of 136,810 that was counted in 2019 and by the year 2031, the population is expected to increase by 28% bringing the population to 176,000. It is one of the province’s fastest growing regions located within the Regional Municipality of Waterloo. It is also perfectly positioned on the west-end, near Highway 401 which makes it a quick 40 minute drive to the City of Toronto.

Cambridge is home to many local events and attractions including the Cambridge History Festival, the Jazz Festival, Mill Road Winter Fair, Mill Race Festival and Christmas in Cambridge. This city is also known for its influential art and culture. The federal, provincial and municipal government of Cambridge partnered together to build the Dunfield Theatre in 2013, a 59,000 square-foot complex to promote performing arts and culture.

This complex was built to bring visitors to this area and enhance the city’s economy. Cambridge also has a thriving economy known for housing some of the country’s largest businesses. Toyota Motor Manufacturing Canada is one of the largest employers in the city. Some of the other corporations include Loblaw Company Limited, Frito-Lay Canada, Rockwell Automation and ATS Automation Tooling Systems, these are just some of the companies that reside in this city.

Average Price of Condos in Cambridge

Cambridge is a part of tri-cities that’s made up of three cities in the west-end, Cambridge, Kitchener and Waterloo. This means that residents in Cambridge have access to many post-secondary schools in the tri-city area. Costenga College has a campus in Cambridge that enrolls over 30,000 students. Additionally, Wilfrid Laurier University, the University of Waterloo and the University of Guelph are all 24 kilometre drive from Cambridge.

This area also offers some scenic natural amenities. Cambridge is made up of many rivers that run through it. The most well-known is the Grand River which runs north and south directly through the city while smaller rivers connect to the Grand River. Residents here will also find a lot of lush greenery and woodlands in the area as there are many parks, recreational trails and conservation areas that give residents the option to take part in outdoor activities all year long. Cambridge has over 900-acres of parkland, 99 parks, over 140 sports fields, over 70 kilometers of natural trails and many golf courses.

The City of Cambridge’s vision lays the foundation of everything the city does. The vision is for ‘A place for people to prosper - alive and with opportunity.’ That’s why the municipality has come up with a strategic plan to invest in the city’s growth and economy. Investors will find that many new developments will start to come up in this area as the city continues to support its growth.

Cambridge provides many easy ways to get around as it has many arterial roads that run through the city. Highway 8 and Highway 24 both connect midway through the city creating an x-shape. These two roads can take commuters to Guelph, Waterloo and Kitchener quickly. Highway 401 also runs through the city which can take drivers to Downtown Toronto in just 40 minutes.

Cambridge also has the Grand River Transit that runs through it. This public transit service has recently just finished building Stage 1 of the ION Light Rail Transit (LRT). 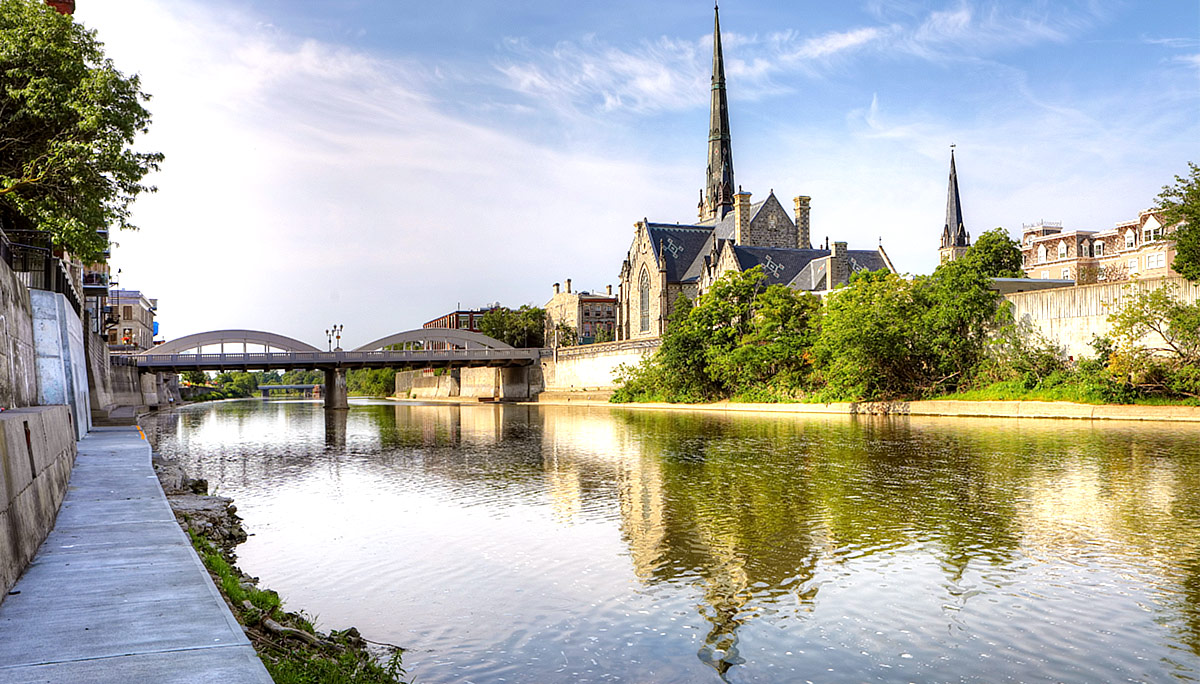 This rapid transit service connects to Kitchener and Waterloo quickly and seamlessly while bringing commuters to major landmarks across the tri-city area which include connecting to the University of Waterloo and Wilfrid Laurier University. Stage 2 of this LRT will expand its corridor to Cambridge allowing commuters to travel through the tri-cities quickly. This transit line will eliminate traffic congestion by providing quick, reliable service that commuters can depend on.

Cambridge is a mid-size city with a quaint small town feel. Cambridge's founding communities have such a rich history that locals refer to themselves as being from Hespeler, Galt or Preston. Despite the fact that these communities amalgamated in 1973, the locals still refer to themselves by their neighborhood and each community gives its own unique contribution to the city of Cambridge.
This city has a historic feel and this is largely due to the Scottish builders who constructed many of the buildings in the 1800s that are now occupied by shops, restaurants and businesses. Heritage is an important part of Cambridge and the community is constantly working to restore, preserve and protect them while incorporating new buildings to the area.

The City of Cambridge offers many cultural opportunities, including live music, theatre, festivals and events. The Cambridge Centre for the Arts has activities and programs for all ages giving kids the opportunity to join after-school and summer camp programs. There is something to do here all year long and for every age.

What is the lifestyle like in Cambridge compared to other cities across the GTA?

Cambridge is home to more than 100 parks covering more than 900 acres of land. With the Grand River offering great opportunities and activities to stay active such as canoeing, kayaking and fishing. There are also more than 70 km of trails for biking and hiking. Cambridge is a great location for living an active healthy lifestyle. Additionally, investors can find reasonably priced homes here with large living spaces. The commute to the city of Toronto is less than an hour away, making it a great alternative to investing in larger cities.