Downsview is an area in the north end of Toronto in the district of North York. It is among one of Toronto's largest neighbourhoods. The area is bordered by Allen Road to the east, Lawrence Avenue West to the south, Highway 400 to the west and Sheppard Avenue to the north. It encompasses a number of residential streets that back onto greenbelts and parkland. Many of these homes are custom constructed to take advantage of their lush surroundings.

It is comparatively a young neighbourhood, with 85% of residents being beneath the age of 65 and masses of kids under the age of 14. Couples with youngsters are the most common sort of household. There are roughly comparable numbers of couples without children and single parent households as well. Downsview is a relatively low-earning neighbourhood, the average after-tax household Income is $53,367. The current population is 34,659, although this number will aggressively rise, due to the development and construction of multitudes of new condos.

Downsview features detached houses, accounting for 55% of sales, accompanied by semi-detached houses at 13% and townhouses at 11%. Bungalows houses are the most common trend and the majority of properties have three bedrooms.

Downsview will soon undergo a massive revitalization project that is set to draw in new residences, employment opportunities and extensive retail space. The redevelopment of this neighbourhood is a part of the City of Toronto’s Secondary Plan that documents its vision to turn the current underutilized land into a new, urban community. This redevelopment project has the potential to accommodate up to 42,000 residents and new jobs. Currently, most of this land is being taken up by Downsview Airport, owned and operated by Bombardier Inc. As of recently, Bombardier is moving its headquarters closer to Toronto Pearson International Airport which will add 375-acres of land that will be used for real estate and employment growth. 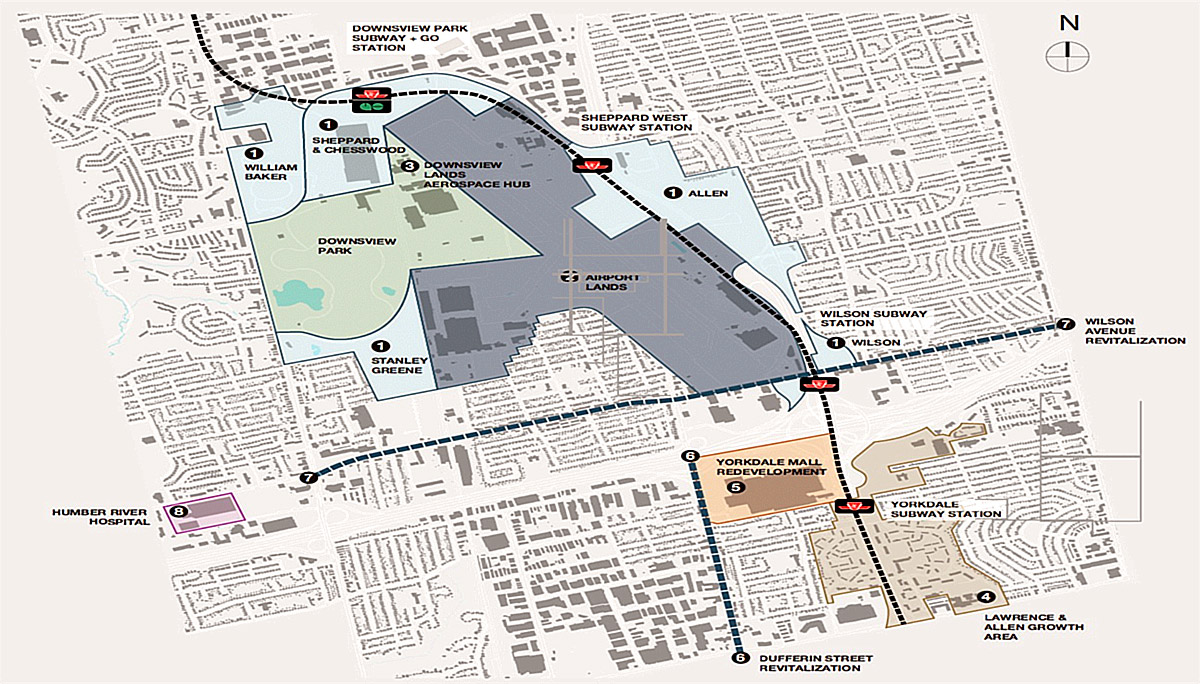 Developers are starting to take advantage of this opportunity, many of which are already getting their proposals approved by the city because they adhere to the goals of the secondary plan. Investors can expect new mixed-use condominiums and master-planned communities coming to the area which will create an abundance of residential, retail and office space. The area that is slated for redevelopment will sit between Keele Street to the west, Lawrence Avenue to the south, Allen Road to the east and Sheppard Avenue to the north. Yorkdale Mall will see twelve new towers that will offer 980,000 square-feet of retail space and over 2 million square-feet of office space. The corner between Sheppard Avenue and Chesswood Drive calls for an 8-acre master-planned community proposed for the site. Even as the neighbourhood goes through extensive changes, Downsview Park will remain an open-space that will continue to support cultural and recreational events. 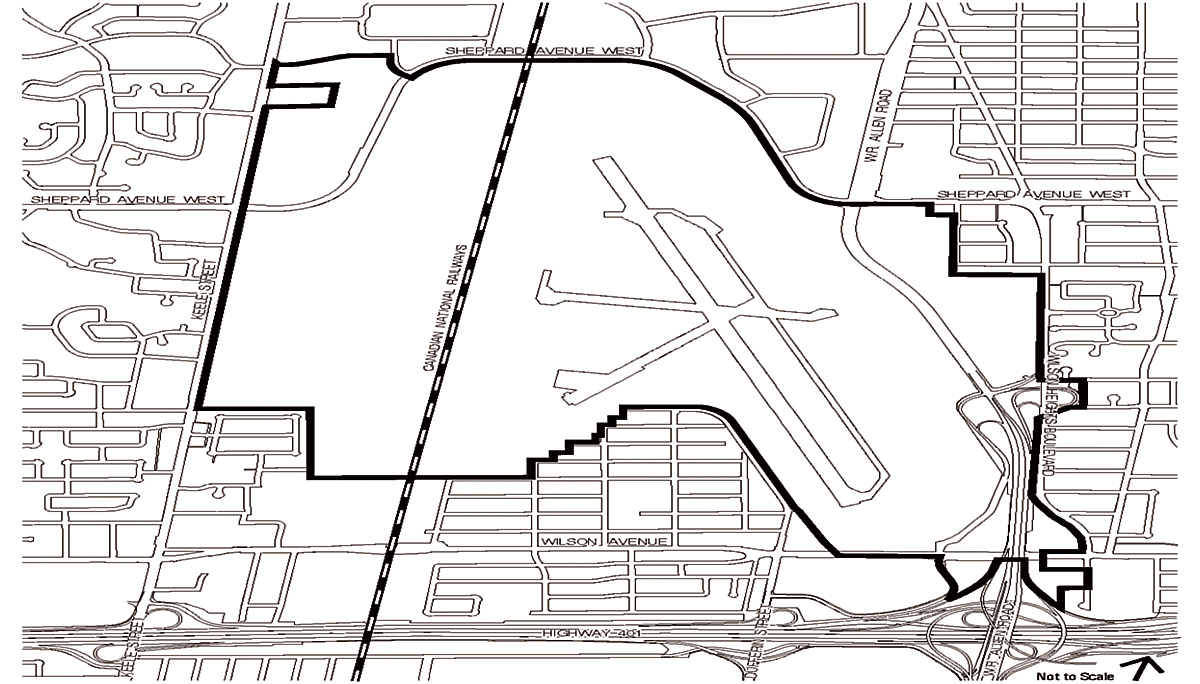 To add to this incredible redevelopment, the University of Toronto is partnering with aircraft manufacturers and other academic institutions such as Centennial College, Ryerson University and York University to develop the Downsview Aerospace Innovation and Research Hub (DAIR). Centennial College opened their Downsview campus in 2018, just east of Keele Street and Sheppard Avenue West. This campus includes a 130,000 square-foot training and research facility for aerospace and aviation.

This is just the start to DAIR’s new development that will be built beside Centennial’s new campus. Bombardier will partner with DAIR providing millions of dollars in funding to support ongoing projects and innovative research at the hub.

Once built, the University of Toronto Institute for Aerospace Studies will relocate to this site. This will be the country's first complex that will focus on creating modern airplanes, spaceships and satellites. This research hub will create approximately 14,400 new jobs in order to compete in the aerospace global market and will contribute $2.3 billion towards the economy. Given that Downsview has had a long-standing aviation history it seems only fitting that a new aerospace research hub will dominate this area.

Despite the incredible future developments coming to this area, there is currently a plethora of services in the Downsview community. There are private and public schools, playgrounds for neighbourhood youngsters, shops, restaurants (which tend to be fairly priced), libraries, community centres, and the Downsview Arena. Residents will find many post-secondary schools close by including York University and Seneca College located only minutes away. Additionally, Centennial College, Ryerson University, George Brown College and the University of Toronto are just a few subway stops away. Downsview is a well-served transit hub with Downsview Park, Sheppard West, Wilson and Yorkdale Station all within walking distance that will connect residents from Vaughan to Downtown Toronto. There is also ample green space, extensive parks like Chalkfarm Park and Downsview Dell. Downsview Park is likewise within the neighbourhood and has all sorts of programs and activities available.

Another exciting part of this community's evolution is the Humber River Hospital that flourished with the help of new innovations. This hospital, that has 656 beds and 13,000 yearly visitors, has opened Canada’s First Hospital Command Centre. This revolutionary approach to medicine is analogous to putting an air traffic control centre in a hospital. This will allow the hospital's different faculties to communicate with each other and coordinate a more efficient health care facility. It's no wonder Downsview's popularity is growing, it's an exciting place that's being propelled into the future.

Motorists can be downtown easily via Bathurst Street and Dufferin Street. Highway 401 is a short drive from any spot in this neighbourhood with on ramps at Keele and Dufferin Streets and the Allen Road Expressway. TTC bus lines rush along Lawrence Avenue West, Wilson and Sheppard Avenues, which connects to the Yonge/University/Spadina subway line. Dufferin, Keele and Jane Streets connects to the Bloor/Danforth subway line. Note that several of these routes run 24 hours, making commutes more convenient.

Investors are encouraged to keep an eye out for pre-construction condominiums coming to this area. Downsview will be going through a complete transformation, it will soon become almost unrecognizable as new developments will turn the neighbourhood into a city within a city. Future residents and tenants will have everything they need from modern residences, office space that will surely attract major employers, retail space that will include shops, services and dining, all while being closely connected to public transit. This area is a prime investment opportunity as new developments will draw in everyone from young professionals to growing families.