Scarborough City Centre is now a neighbourhood within the northeastern edge of Toronto, but it was once considered a central business district inside the former city of Scarborough. High-rise condominium towers envelop the area, and these significant structures and public spaces form the district's monumental skyline. Its boundaries span between Midland Avenue on the west, Highway 401 to the north, Markham Road to the east and Ellesmere Road to the south.

The neighbourhood is a mixed-use development with a shopping mall, residential condos, low-density housing, office towers, a Government of Canada office, schools, and recreational facilities. The area is first rate for all kinds of families, however singles are the largest demographic here. Households with children in the area usually have one child at home, and most of those are younger kids.

The Scarborough Town Centre mall has essentially made the neighbourhood what it is. This mall is the focal point of the city centre, and it's home to Scarborough Centre Station, which connects the region with the Scarborough LRT, and by extension the entire TTC.

Homeownership in the area is quite high, where 64% of its residents own their property in comparison to 36% who rent. The average household income is $63,085. The neighbourhood's population is roughly 7,371, but it is growing rapidly due to the amount of new condo developments. More than half of the residents are newcomers, and 64% are between the ages of 25 and 54. 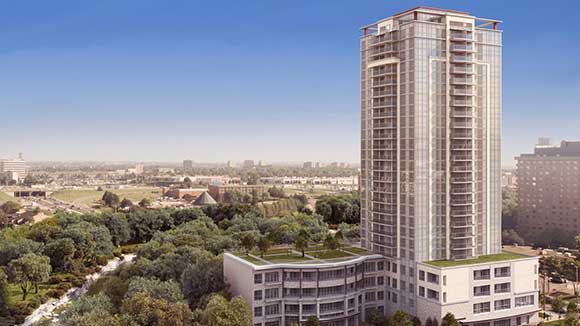 Scarborough City Centre largely features condos, accounting for 46% of sales, accompanied by detached houses at 30% and semi-detached houses at 3%. Condo apartments are the most common trend and the majority of properties have three bedrooms.The average price in Scarborough City Centre over the past year was $433,358, an increase of 16% over the previous term. The average condo premium over the past year was $311,434, compared to the average freehold price of $705,478 over the same timeframe.

Centennial College is located on the eastern front of this neighbourhood. This is the oldest publicly funded college in Ontario, and it is renowned for its diverse and multicultural student body. In 2016, it was ranked as one of Canada's top ten research colleges. Approximately 40,000 students attend classes here.

This community provides a wide number of public transit options. The area features convenient access to the Scarborough RT Line, and several TTC buses provide connections to its subway line. There's also the Scarborough Centre Bus Terminal that offers intercity travel with GO Transit, Coach Canada, Can-ar, Megabus, and Greyhound that can take you where you need to be. For motorists, there are plenty of arterial roadways in the area, in addition to the Highway 401, which is only a short drive away. And, just recently, the city has announced plans to extend the TTC Line 2 subway from Kennedy Station to Scarborough Town Centre, thereby fulfilling this area’s role as the region’s most important transportation hub.

Now that it will be connected to the rest of the city by subway, this area has attracted a rush of new residential developments, none more ambitious than the 36 tower master-planned community that will irrevocably alter the city. By changing its environment into a fully walkable downtown core with transit-oriented intensive development, this massive redevelopment plan is set to double Scarborough Centre’s population of 14,150 and substantially increase its current number of 15,800 jobs.

As significant a development as these incredible numbers suggest, the Scarborough Centre redevelopment also wants to lead the charge of turning suburban, car-centred communities into a lively, urban, mixed-use destinations as defined by access to transit and compact development.
All the same, this area is already home to numerous luxurious condo units serviced by world class amenities, this region has always been a reasonable and charming alternative to living in Toronto's core. Now that it is well on its way to becoming a new urban centre, this revitalised downtown will make property values rise in the neighbourhood, so don’t overlook the potential of this sought-after thriving city neighbourhood. Why not make this your new address?

List of New Condos in the Scarborough City Centre Neighbourhood