Why Should You Invest In Toronto Real Estate?

The city has experienced a period of architectural resurrection. This is because several buildings that were designed by world renowned architects were completed throughout the late 2000's. Imagine living in one of the many Toronto new condos close to landmark in downtown core, or one of its many surrounding neighbourhoods - it's enough to take your breath away.

It is projected that very soon, Toronto will have the most high-rise condominiums in the world. Young single professionals between the ages of 25-35 prefer the downtown core as their desired location to live; exactly where the city's condo market has exploded over the last decade. There is an abundance of new pre-constructed condos for sale, and this will add to Toronto's growth, competitive edge and quality of life. For those who love big cities like New York and Los Angeles but with less crime -Toronto is a great fit.

The average rental rate for the City of Toronto is presently $2,300. This is in addition to a rental appreciation rate of 3.3% for the past 10 years. The demand for condos is still strong here as the vacancy rate currently sits at 1.7%.

See All New Condos in Toronto

Toronto is Canada's economic powerhouse and its largest city, it is also North America's fourth most populous municipality. It is bordered by Steeles Avenue to the north, the Rouge River to the east, Lake Ontario to the south and Etobicoke Creek/Highway 427 to the west. It is home to a diverse population of about 2.8 million people.

Toronto is a lively, bustling metropolis with a core of soaring skyscrapers, multi-storey condominiums, and office towers, but they are all overshadowed by the iconic CN Tower. Toronto is a dynamic, diverse, rising city that provides an optimal business environment for companies looking for a competitive edge, since it is Canada's financial and business capital.

Toronto is rated as one of the top  global cities with economic clout, only behind New York. It's a global centre for finance, business, arts and culture, and it is consistently ranked one of the world's most liveable cities in the world.

According to Statistics Canada Labour Force Survey data, over 1.26 million of Toronto residents are employed.  Eighty-five percent of City’s residents work in the service-producing industries.

The economic outlook for 2017 is for employment to continue increasing at a rapid pace, while the unemployment rate is expected to fall well below eight percent. The housing market enterprise will continue to increase, with continued growth in prices, sales and construction.

This awe-inspiring city has virtually everything you could ever want or need within a small radius. There is always something going on every weekend throughout the year, but it is the summer when the city comes alive with multiple festivals and events happening simultaneously.

Toronto is one of the most accessible cities in North America. The TTC (Toronto Transit Commission) is a great option to get in and around the city. Their fleet consists of subways, streetcars and buses. Toronto has North America's third largest public transit system after New York City and Mexico City.

The city is easy to maneuver with a durable grid street design, it’s one of the most extensive public transit systems in North America and has a large number of  concentrated walkable pathways, trails, alleyways and bridge access.

Another  project worth noting is the incoming Under Gardiner Park. New LRT lines and bike lanes will be implemented in dedication to creating a more pedestrian-friendly streetscape.

Another advantage is to use the PATH system, which is the largest underground pedestrian walkway in North America. It connects 1200 restaurants and stores, approximately fifty office towers, twenty parking garages, six subway stations and a railway terminal over its; 28 km span. Each letter in PATH embodies a different colour, each representing a direction. The P is red, which represents south. The orange A directs pedestrians to the west, while the blue T directs them north. The yellow H which points to the east.

Toronto is a blast, no matter what the name. Whether it be Hogtown, Hollywood North, T.O., The Megacity, T-dot, We The North,The 416 or just simply the 6ix, it's home - a vibrant, big-time city abuzz with endless activities. Therefore, you should come and explore what this great city of ours has to offer.  Live, work and play harder! 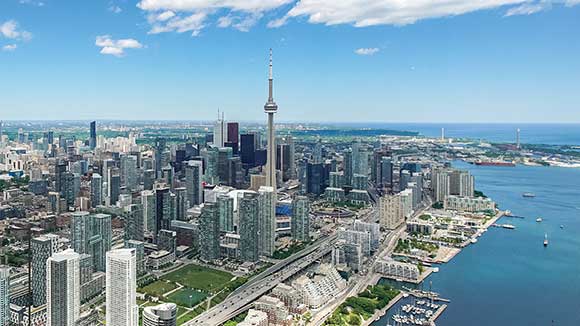 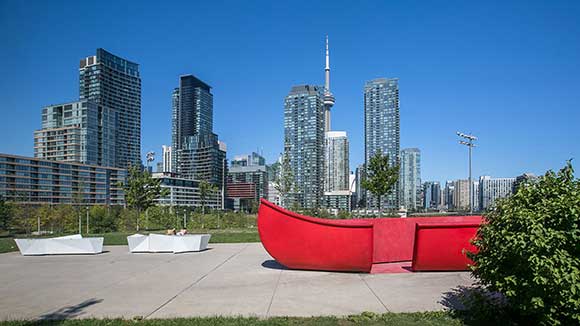 Where in Toronto should I purchase / invest in a condo?

The best place to purchase / invest in pre construction condos is a location close to the Transit system. Walking to a nearby subway station is always more convenient than taking a bus or streetcar to a subway station. Walking distance from a school or hospital is also ideal. The downtown professional and University student would be your main tenant or purchaser. They are looking to live in an area with instant access to transit, schools, hospitals, restaurants and a nearby shopping mall wouldn’t hurt. Reach out to one of our sales representatives and we will guide you in the right direction on where to invest in Toronto New condo projects.

What is my Land Transfer Tax amount in Toronto?

When buying residential real estate in the province of Ontario it is subject to a land transfer tax. If you are buying a pre construction condo in Toronto you will also be required to pay a separate land transfer tax to the city as well. If you are a First Time Home Buyer (meaning you have not owned property before in your lifetime anywhere in the world) you are eligible to receive rebates from both the Province of Ontario and the City of Toronto. In order to qualify for the rebates you must occupy the property you are buying as your principal residence. Click Here to calculate your Land Transfer Tax.

How can I profit from the Toronto Condo Market?

This is a loaded question. In short, every condo investor’s goal is to get a positive cash flow, the tenant paying down your mortgage balance and last but not least, investing in an area that has capital appreciation. Our GTA-Homes sales representative will guide you through the process to find the right pre construction condo  investment in toronto to achieve your investment requirements.