Corktown is a long forgotten neighbourhood in Toronto, but recent redevelopment is transforming the area into one of the hottest regions in the entire GTA. The region is entrenched in the city’s industrial past, and despite recent revitalization, old Victorian industrial architecture still characterizes the neighbourhood. It’s common to see old factories and warehouses refurbished into live/work loft style homes in this part of town, as well as trendy condos that have entwined the red brick industrial facades with modern steel and glass in an effort to redevelop the neighbourhood while respecting its treasured past.

This neighbourhood has a fascinating history born out of the surrounding distilleries, breweries, and other industries. There is some debate over how the area got its name. Some believe that it is named for the corks that were used in the distilleries, but the more accepted notion is that it was named for the Irish immigrants - particularly from Cork County - that inhabited the neighbourhood.

The area is still characterized by the brick row housing once inhabited by the workers. The Enoch Turner School can also be found here, which was the first free public school in Toronto, and today it is a historic site museum. The neighbourhood is also home to St. Paul’s Basilica, Toronto’s oldest Roman Catholic congregation, which was designated a minor basilica by Pope John Paul II in 1999. 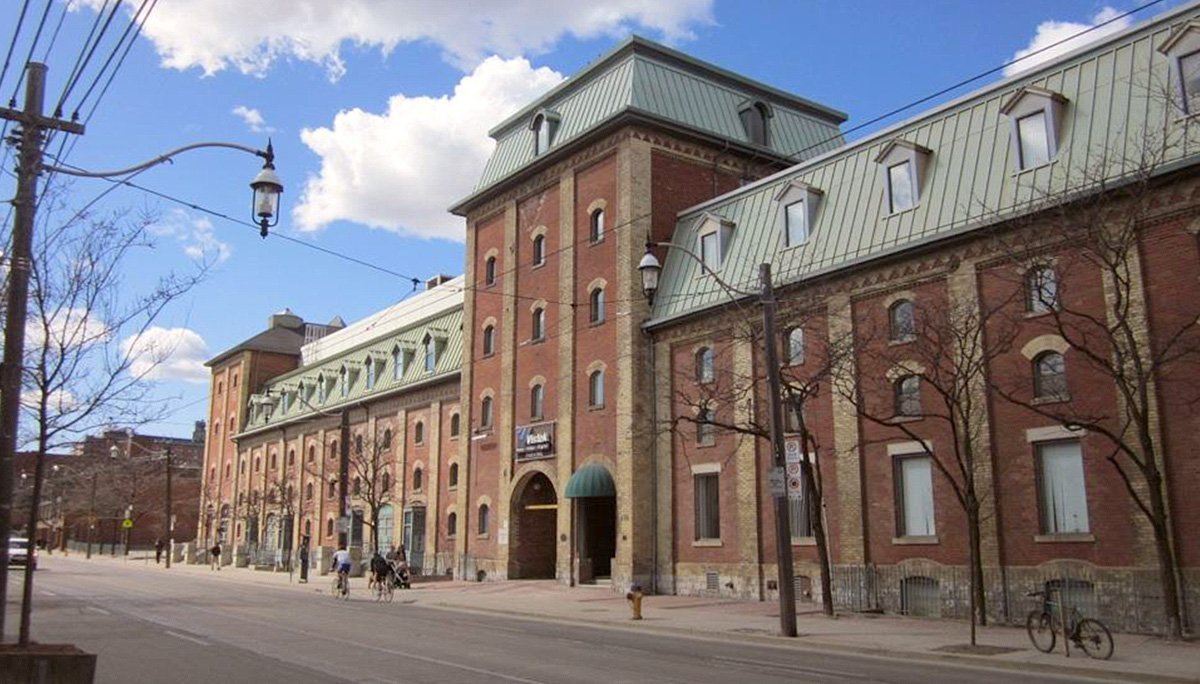 This area has been transforming throughout the past few years as it’s swiftly being launched into the 21st century. Condos make up the vast majority of home sales in the area with 80% - lofts being the majority of those sales. The remaining sales are mostly townhomes. This is a scorching hot market, evidenced by the average home price that was $669,976 over the past twelve months - a 23% increase from the previous year. Condos were priced at $586,293 over the past year, compared to the average freehold price of $1,049,891 over the same time period.

The neighbourhood's newfound appeal was catalyzed by the Corktown Commons project. Being a former industrial area, the region's soil suffered major contamination. The West Don Lands was one of these brownfield areas with poisoned soil, so the city put in years of work - and millions of dollars - in an effort to turn the derelict land into an emerald haven in the middle of the city. Today Corktown Commons has a marsh, a splash pad, playground areas, lush green hills, and permanent barbeque areas with communal picnic tables.

This neighbourhood's revitalization can be partially explained by the bordering Distillery District. Once the employment destination for many of Corktown's inhabitants, the Distillery District has been taken over by an ambitious refurbishing project that has seen the area become a major dining and leisure hub. Residents can take advantage of their proximity to the Distillery District by embarking on a Sunday stroll through its classic cobblestone streets, stepping into one of the area’s many fine restaurants, or just taking in the art installations that periodically take over the Distillery.

This doesn’t mean you must leave Corktown if you’re looking for a good place to eat. Taking a queue from its sister neighbourhood, the region has begun attracting the attention of some phenomenal restaurateurs who are looking to influence the area with their delicious fare. One highlight is ARDO Restaurant - a Sicilian restaurant that is attracting people from all over the city.

This neighbourhood is dripping with history, but since Toronto’s de-industrialisation efforts in the 1970’s, the area failed to attract the attention of developers and homebuyers for many years. Today, it is one of the hottest regions in the GTA, thanks to the city undertaking the Corktown Commons project that converted a swath of brownfield into a vibrant green space, as well as the successful renovation of the neighbouring Distillery District. Condos here are special because many of them are able to intertwine the characteristics of the red brick industrial buildings with modern steel and glass. This is the perfect neighbourhood for those who are looking for an area with historic roots, but with modern urban amenities.