Forest Hill is a neighbourhood situated north of downtown Toronto. Along with other neighbourhoods such as the Bridle Path, Rosedale, and The Kingsway, it is one of Toronto’s wealthiest, most prestigious and affluent neighbourhoods. Two of Canada’s most revered private schools; Bishop Strachan School for girls and Upper Canada College for boys are both housed within this neighbourhood's borders. The community stretches to Chaplin Crescent to the north, Avenue Road to the east, St. Clair Avenue to the south, and Bathurst Street to the west.

The population of the area has increased due to the many new condo developments being built. The current number of residents stands at 10,926, however, it is projected that a 2.8% boost in population will be coming to the area.

Census data from Statistics Canada states that 42% of residents take home an income of over $80,000 after tax, compared to the $40,704 average income in Toronto's Metropolitan Area. Homeownership stands at 56%, whereas 44% of locals rent their homes.

The neighbourhood largely features detached houses, accounting for 48% of sales, accompanied by condominiums at 34% and other houses at 6%. Condo apartments are the most common trend and the majority of the properties have 2 bedrooms. The average price in Forest Hill over the past year has been $2,337,402, an increase of 12% over the same term last year. The average freehold cost over the past year is $3,637,257 as in comparison to the average condo rate of $1,001,067 over the same timeframe. 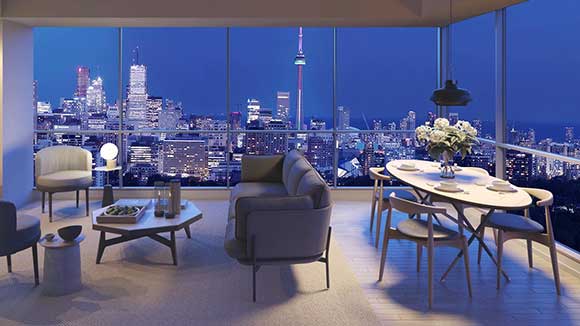 Some of the stores in Forest Hill are high-end boutiques that cater to the location’s affluent population, and the small shopping hub of Forest Hill Village has the atmosphere of a small town rather than a big city. The parks and remarkable schools make the location appealing to families, and its reputation as a neighbourhood of mixed ages makes it even more of a family friendly area. There are plenty of couples, both with and without kids, as well as retirees whose children have left home.

Getting around is made easy via subways stops at Davisville, Eglinton, St. Clair West and St. Clair stations, all of which are only steps away. Several bus and streetcar routes also serve the area, including the 24-hour Bathurst route.

The Allen Expressway is easily accessed from Eglinton Avenue West for motorists commuting in and out of the city.

As good as the current transit already is, this neighbourhood is about to see a massive improvement.  The Eglinton Crosstown LRT is scheduled to be completed in 2020, and it will slice through this community as it runs along Eglinton Avenue.  Not only will this make Eglinton rival Bloor and Yonge as major transit thoroughfares, it will also create two new transfer stations, one of which will be Eglinton West Station.  We're also expecting to see plenty of new developments - both residential and commercial.  This LRT presents an opportunity to become part of the next major transit hub before anyone else.

New ultra modern condominium complexes are quite common in the area, and they are known for their charming luxury amenities. As Forest Hill clings to its idyllic roots, many of the newly constructed condos offer great selections of dynamically designed suites with luxuries and desires that will satisfy anyone's taste.

This region offers first-time condo buyers with the rare opportunity to live luxurious lifestyles within one of Toronto’s best districts. It is surrounded by all of the comforts and conveniences you would expect. This is also a chance to capitalize on the next major development that will stimulate growth in the city. This is the time to buy.

List of New Condos in the Forest Hill Neighbourhood