The Junction Triangle is on the western side of the city, and it is a tiny neighbourhood within a neighbourhood. The area is a triangle surrounded on all three sides by railway lines. To the east is the Metrolinx GO transit Barrie line, to the north is the CPR east-west railway line, and the CNR/CPR mainline is to the west. It is poised to emerge as one of the next up and coming neighbourhoods in the city. Although it has struggled in the past, it’s starting to show signs of reinvigoration, partly due to the people who have great character and spirit.

This pocket of the city has an approximate population of 10,483 residents, and it's growing rapidly due a major metamorphosis taking place via the rise of new condo developments, which are resulting in a huge influx of new residents. This will completely alter the neighbourhood’s identity.

This neighbourhood has charmed developers, due to its close proximity to High Park and the downtown core, as well as its easy access to the Bloor/Danforth subway line. In recent years the Junction Triangle has withstood a major rebirth that has seen much of its former industrial core replaced by residential lofts, townhomes, and low to mid-rise condominiums. The current average home price is $547,199, which contrasts with the previous year's price of $510,444, a 7% rise. 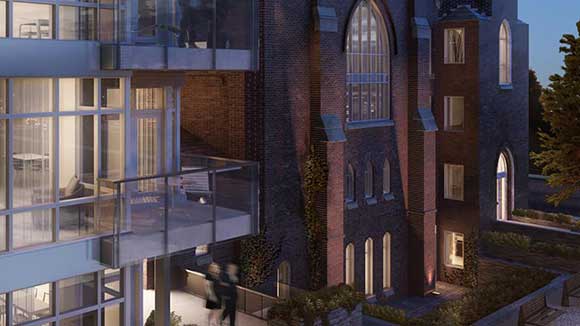 An ambitious development could introduce major change to this tiny west-end district. There are plans to create a mixed-use neighbourhood by incorporating modern townhomes with multi-storey residential buildings and affordable live-work spaces. This could generate nearly 3,000 jobs in the area.

The access to public transportation in Junction Triangle is excellent. The area has bus service along Dundas Street, Keele Street, Dupont Street, Lansdowne Avenue, and Symington Avenue. The subway also services this neighbourhood via Dundas West, Lansdowne and Dupont Stations.

Motorists can be downtown in 10 minutes by way of either Bloor Street West or Dundas Street West. Further improvement is on its way with Metrolinx’s newly planned GO Station proposed for the corner of Bloor and Lansdowne.

It’s no secret that the Junction Triangle has seen some of the best Toronto real estate returns out of any up and coming neighbourhood in the last decade. It’s quickly becoming a popular area by attracting a wealth of young professionals, couples and young families. This will be a lovely community in which to live, work and play. Buyers who previously took the risk on condos in Junction Triangle found that it had paid off incredibly well. This is why you should jump on the opportunity to invest or purchase in this neighbourhood. This could be the next Liberty Village!

List of New Condos in the Junction Triangle Neighbourhood