Midtown Toronto is a central business district, subordinate to the downtown core. Its two major focal points are the intersections of Yonge and Eglinton, and Yonge and St Clair. It's situated north of the main hub, bound by Lawrence Avenue to the north, Bayview Avenue to the east, Bloor Street to the south, and Marlee Avenue to the west. It is an affluent neighbourhood which is evolving quicker than the rest of the city. This charming, dynamic community captures the attention of many young urban professionals, couples and young families. Many condo apartments offer great views of the city’s skyline against the backdrop of Lake Ontario.

This is an urban and pedestrian friendly community where you can walk to schools, restaurants, shops, and everything in between. It has a wealth of exceptional amenities nearby. In recent years, the area has been voted the number one neighbourhood in which to live.

Many are taking advantage of the opportunities to purchase newly developed condos, townhomes and even rental units as swiftly as they become available. The average price for a home is $845,124 and rental units are approximately $2,400 per month.

While the consistent high rank in livability is a source of pride for this community, there's always room for improvement. In this case, it's the implementation of the Eglinton Crosstown LRT, which will slice across Eglinton Avenue, and create numerous new transit hubs and developments along the way. 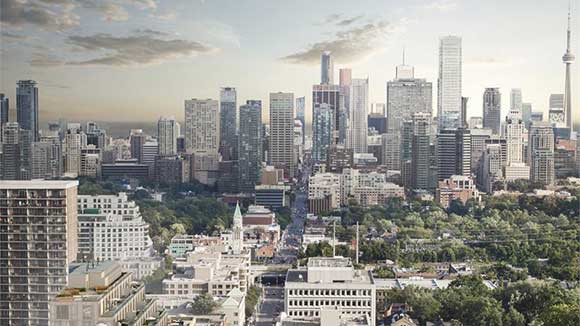 This will allow excellent mobility in and out of this section of the city, as well as provide an adequate form of transportation for its growing populace, but the area already has excellent access to public transit. Lawrence, Eglinton, Davisville and St. Clair Stations currently serve the neighbourhood, along with several bus routes which are easily accessible. For motorists, there are numerous arterial roadways that can take you wherever you need to be in the GTA - and beyond.

This area has seen an upsurge of commercial and residential developments wherever space is available. The region houses a considerable amount of newly pre-constructed condominiums, ranging from mid-sized to high-rise.

The approximate population is currently around 53,985, however it’s going to continue growing exponentially due to the mass amount of high density condo developments being built in the area.

This is a place that offers all the perks of living in the heart of Toronto, and it is only a stone’s throw away from the downtown core. This is a stylish community whose qualities you will not find anywhere else in the GTA. This is definitely one of Toronto’s most vibrant urban locations, so why miss out and be left behind? Be one of the smart ones who will make this neighbourhood their home.

List of New Condos in the Midtown Toronto Neighbourhood