Riverdale is located in central Toronto and it is the gateway to the city’s eastern neighbourhoods. This is a vibrant community with diverse cultures and shopping districts. It is also renowned for its excellent dining options. The area is extremely accessible both by arterial roadways and public transit. There are amazing parks here too, including Riverdale Park, which gives the neighbourhood its name.

This large neighbourhood is blessed by three major commercial streets where residents can choose from a wide variety of different shops.

The northernmost of these streets is Danforth Avenue, which is also known as Greek Town. This stretch of road is the largest Greek community in North America, and it is home to the best Greek restaurants and bakeries in the whole city. It's not just the restaurants that are decidedly Greek here. Greek flags and letters line the streets, and the Greek Orthodox churches have become symbols of the area. You have to be sure to pick up some traditional Greek honey balls! You can also find some amazing boutique clothing stores, particularly in the western stretch of the street. 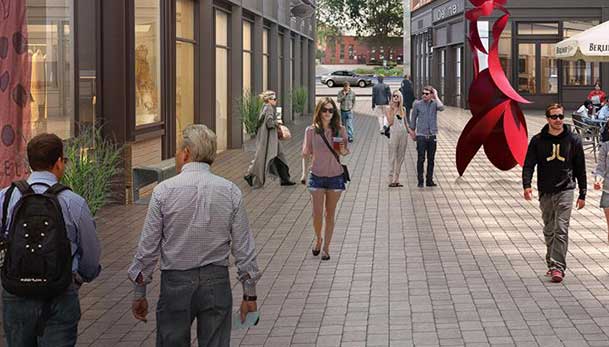 Gerrard Street East is the next major commercial street in the area. This is also known as East Chinatown, and it has a dense community of Cantonese speakers. This is also where you’ll find Gerrard Square, the primary destination for shoppers who are looking for your standard department stores and services. It has a Home Depot and Walmart. If you continue east on this street into Leslieville, you’ll find Toronto’s Little India neighbourhood.

Further south still is Queen Street East. This area has attracted many of the city’s young professionals, and you can find a slew of boutique clothing stores and trendy restaurants here. There is also a concentration of antique shops where residents can discover historical trinkets and oddities. You’ll never know what you’re going to find!

The entire area has held onto its Old Toronto charm as you can mostly find Victorian era row and semi-detached housing here. Over the past year, 59% of sales were for semi-detached homes, while detached homes accounted for 32% and townhouses for 4%. The average home price over that time was $1,470,050, which can be broken down into an average freehold price of $1,502,637, and an average condo price of $753,533. There haven’t been many condo sales over this time, but developers are beginning to notice this neighbourhood’s appeal - not just for its rich culture, but also because of its accessibility.

It is bordered to the west by the Don River, and with it the Don Valley Parkway. This is a major transit artery that connects the entire city on a north-south axis. Carlaw Avenue also provides a direct route to Lake Shore Boulevard, and by extension the Gardiner Expressway. This can take you across the entire city in a flash. Danforth Avenue also runs parallel to the subway, and this region has three subway stations within its borders. Queen Street is a major transit pathway too, as the 501 streetcar is a dedicated public transit route that runs across the entire city.

Riverdale Park is the eponymous green space, and one of the largest parks in the city. It is situated adjacent to the river, and it provides stunning views of the city’s skyline. Canadian winters can’t keep locals away from this spot, as the steep hills are a popular destination for tobogganers. Withrow Park is another popular hangout spot. It is outfitted with a soccer field, playground, and tennis courts. It also plays host to the Withrow Park Farmers Market in the warmer months.

This is one of the last untouched Toronto neighbourhoods. Its streets are lined with the old Victorian era housing that used to characterize the entire city. The whole region embodies Canada’s dedication to multiculturalism, with 3 distinct cultural neighbourhoods nearby. This diverse cultural makeup of the neighbourhood, along with the influx of young urban professionals, has made this a culinary hub that attracts people from all over the city. It is also extremely accessible due to its borders being lined with major roadways and subway routes. This is definitely one of the most desirable neighbourhoods in the entire GTA, and it should be a significant priority for investors.