See New Condos in The Annex

The Annex is a central Toronto neighbourhood that is historically renowned for being one of the most sought after areas in the GTA. It is known for having a high number of renters, government offices, students, art facilities, recreation complexes, and religious workers. It is a diverse neighbourhood where streets are lined by trees, great independent shops, and youthful energy. The area is bounded by Dupont Street to the north, Harbord Street to the south, Avenue Road to the east, and Bathurst Street to the west. It’s a dynamic neighbourhood with a bustling nightlife and vibrant street scene. Visitors can see a seamless blend of old and young, traditional and modern in both the demographic and housing options within this neighbourhood's borders.

The population currently stands at 29,180, and 26% of the homes are owned while 74% are tenanted.  The area has mean earnings of $66,742.67, whereas as the average household income sits at $129,777, which is well above the Toronto's average. Adjacent to the University of Toronto, this neighbourhood has long been a student quarter and is likewise home to many fraternities, as well as members of the university's faculty. Its residents are predominantly well-educated individuals. 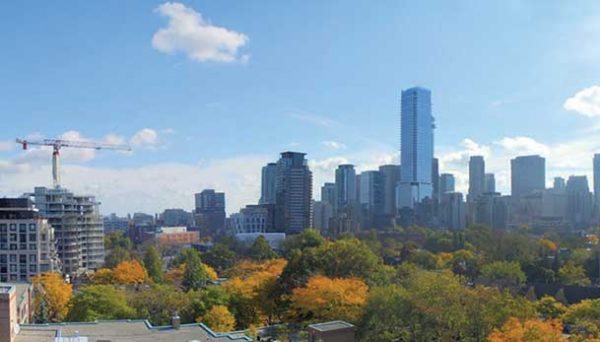 Its surroundings are mainly residential, with one-way tree-lined streets fortified with Edwardian and Victorian homes, many of which being stately mansions. In the 1950’s and 1960’s, the community began seeing these classic houses and manors getting torn down.  This was to make way for the new mid-rise and high-rise apartment buildings that could accommodate the vibrant growth in the area. The apartment complexes were outfitted with green spaces in an attempt to more cohesively blend in with the rest of the neighbourhood. Today, many new condominium developments have been sprouting up along this section of midtown Toronto, which in turn has greatly influenced the exponential growth of the population. Residents of The Annex are successful business people, young families, prominent artists, and people from all walks of life.

Currently, The Annex largely features condominiums like ANX Condo, accounting for 46% of sales, accompanied by semi-detached homes at 23% and condo townhouses at 13%. Condo apartments are the most common trend and the majority of the properties have two bedrooms. The average rate in The Annex over the past year was $1,554,496, an increase of 15% over the previous year. The average condo cost over the past year was $1,150,449 as compared to the average freehold price of $2,199,104 over the same term.

The area has seen prominent growth largely due to its accessibility to public transit. It has are four TTC subway stations, which include Spadina, Bathurst, Dupont and St. George Stations. Both Spadina and St. George Stations connect to either the Yonge/University line, as well as the Bloor/Danforth line. Street level transit operates on Spadina Avenue, Davenport Street, Avenue Road, Dupont Street, and Bathurst Street. Motorists are within minutes of Toronto's business and entertainment districts and can easily reach any of the commuter highways including the Don Valley Parkway, Gardiner Expressway, and Highway 401.

The neighbourhood is quite centrally located, being within walking distance of many major attractions like the University of Toronto and the Royal Ontario Museum. Its span of Bloor Street between Bathurst and St. George is a spirited social area, offering an array of services such as bars, patios, nightclubs, lounges, restaurants, clothing boutiques, bookstores, food markets, travel agencies, professional services, outdoor cafes and much more. Take a brief stroll or bike ride, and you’ll find yourself at the very core of what makes Toronto so great. After experiencing its multiculturalism, culinary innovation, entertainment, art, and music, you'll realize why Toronto is climbing the list of global cities. The Annex is located immediately west of the opulent lifestyle of the Yorkville neighbourhood, where high-end shopping can be had to your heart’s content.

Known as one of the city’s most-beloved and exclusive downtown neighbourhoods, the area has an eclectic lively energy. Its cuisine, shops, and people prove that it is Toronto’s diversity at its very best. In addition to its vibrant reputation, it is also regarded as one of the most friendly regions in the city. Of course, if you do need to leave your immediate area, this neighbourhood is one of the strongest transit hubs in the GTA. This region is known to have great investment potential because of its population density driven market. With the current, ultra hot state of the market, make sure you don’t miss out on the opportunity to make this coveted locale your new home.