Yonge & Eglinton is a neighbourhood north of downtown Toronto. The area has been affectionately referred to as “Yonge and Eg,” and it's sort of a “Downtown North,” complete with a financial centre, vibrant nightlife, and a wealth of high-end shopping and dining options. The area is bound by Mount Pleasant Road to the east, Hillsdale Avenue to the south, Avenue Road to the west, and Briar Hill Avenue to the north.

The community boasts an average income of $147,862, nearly double the average for Toronto as a whole.

Yonge and Eglinton largely features condos as its primary housing style, which account for 43% of sales, accompanied by detached houses at 37% and semi-detached houses at 15%. Two-storey houses are the most common trend, and the majority of properties have two bedrooms. The average cost in Yonge and Eglinton over the past year was $1,082,208, an increase of 11% over the previous term. The average condo cost over the past year was $612,593, as compared to the average freehold cost of $1,681,272 over the same timeframe.

Home ownership in Yonge and Eglinton is low, with a split of 71% renters and 29% owners among those living in the area. This area is one of the most lucrative neighbourhoods for owners with rental units. It has the lowest vacancy rate within the city, so units are guaranteed to interest a variety of tenants. Pre-construction condos are often cheaper than their resale counterparts, and will increase in value as the neighbourhood continues to change. Currently, there are more than 20 new condominiums undergoing construction in the area, and more are slated for development.

The neighbourhood is well served by public transit. Many bus routes travel in and around the neighbourhood. Eglinton Avenue, Yonge Street and Avenue Road connect to the primary subway depot for the area, which is Eglinton Station.

By the year 2020, the Eglinton Crosstown LRT project will be completed. This will bring an estimated 79,000 passengers per day who will be commuting in and out of this bustling area. The LRT will feature 25 stations spanning from Mount Dennis in the west to Kennedy in the east, making Yonge and Eglinton one of only a few intersections in the city to feature rapid transit access in all four directions. Motorists can use the many side streets to avoid the congestion along the major thoroughfares to get downtown quickly and effectively.

Yonge and Eglinton is especially favoured by families raising school age children. It has everything families are looking for in a neighbourhood including large houses, a top notch selection of private and public schools, ample green space, ravines, recreational facilities, and parks.

It has emerged as a prime site for new condominium developments as well, thereby satisfying the demand for an entry level price point into this popular neighbourhood. Young professionals, both single and coupled, will find a tremendous array of options here. 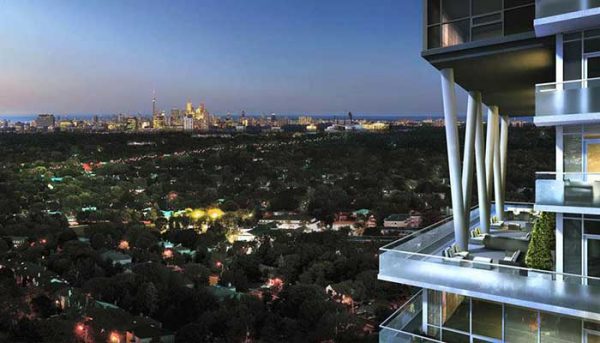 It makes sense that finding the best neighbourhood to fit you and your family is considered your top priority when searching for a new home, so this is one worth considering. The closeness to the downtown core has already encouraged buyers to invest in this area.

The opportunity to put units up for rent at a premium is undeniable one of the neighbourhood's most underrated features. In the future, it will continue to increase property value and rental prices. Yonge and Eglinton has retained it's old-fashioned aesthetic, but with updated conveniences. This is an opportunity that shouldn't be missed.

List of New Condos in the Yonge & Eglinton Neighbourhood