The City of Vaughan is boldly asserting itself as a vital part of the Greater Toronto Area by undergoing the largest and most significant development project in its history — an unprecedented revitalization initiative that will make it a major downtown destination.

The Vaughan Metropolitan Centre (VMC) is Vaughan’s 442-acre central business district that is bound by Highway 400 to the west, Portage Parkway to the north, Creditstone Road to the east, and Highway 407 to the south. And, even with much of the area still under development, this ambitious new district is already expecting to welcome massive economic and population growth. 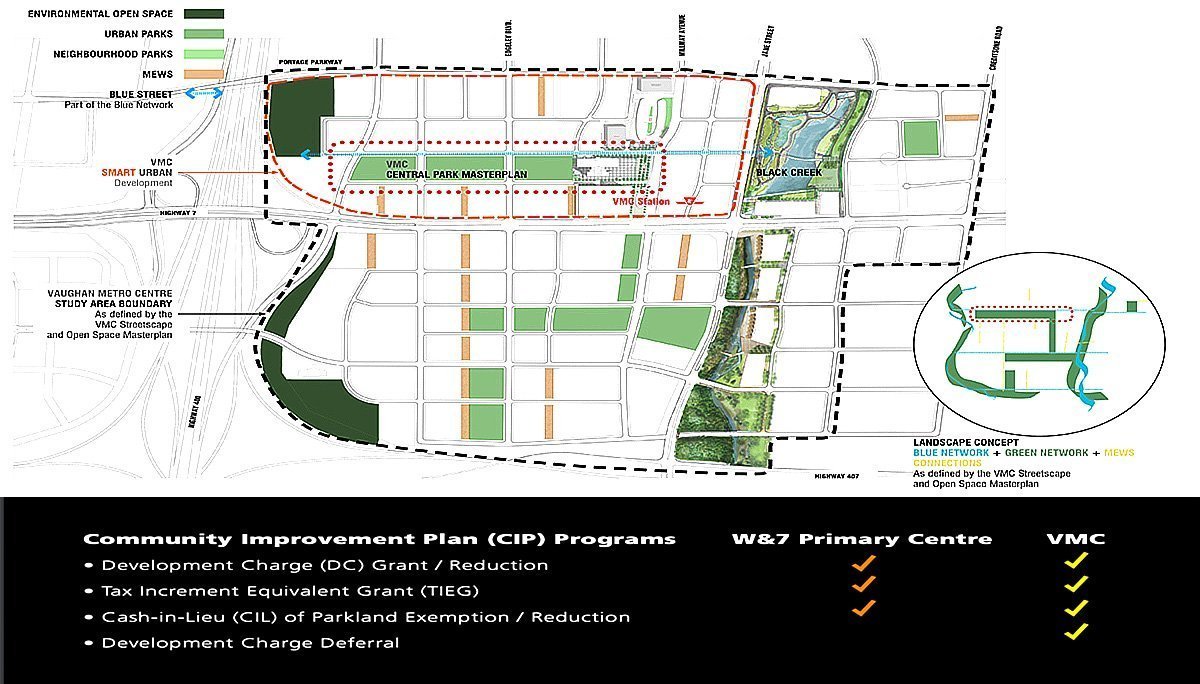 To ensure significant economic growth for the area, the city looks to promote new commercial development in the VMC by offering reduced office costs.

The VMC’s Community Improvement Plan (CIP) contains substantial financial incentives and planning tools such as reductions and deferrals for city development charges, a tax increment equivalent grant to offset incremental assessment increases, cash in lieu parkland exemptions that offer discounts of $4,400 per residential unit in mixed-use buildings, and expedited development approvals by which a dedicated city staff team will ensure the project is delivered as expeditiously as possible.

With much more to come, the incentives have already resulted in the construction of the 365,000-square-foot KPMG Tower, a Class-A office building that features 65,000 square feet of retail space and is the recipient of a 2017 NAIOP Greater Toronto Rex Award for Office Development of the Year.

Not only that, VMC has become home to a number of residential condominium developments that include CG Tower, a 554-unit 60-storey architectural landmark that will become the tallest building in Vaughan when completed in September 2021.

And they won’t be alone; these developments will be complemented by a full-roster of community services and facilities. By 2020, the 9-storey, 220,000-square-foot PwC-YMCA Tower is expected to open, a space whereby 36,000 square feet of space will be allocated for a new library branch, performing arts studio and community kitchen while another 77,000 square feet will be reserved for a new branch of the YMCA that will contain a pool, fitness area as well as not-for-profit child care facilities.

As a brand-new area made from scratch, the VMC has prioritized the development of local transportation infrastructure that will define it as a transit-oriented neighbourhood. Chief among these developments is the Vaughan Metropolitan Subway Station, the TTC’s most northerly terminus of its Line 1 subway. With more than 20,000 commuters passing through the VMC Mobility Hub on a daily basis, subway riders can reach York University in 7 minutes and the Bay Street Subway Station in 45 minutes.

Also solidifying this area’s role as the region’s major transportation hub is the SmartCentres Place Bus Terminal, a new regional transit interchange connected to the adjoining subway station and VIVA express bus routes via an underground tunnel. The situation is no less convenient for drivers that are given a straightforward entry onto Highways 7, 407 and 400, allowing you to get where you need to be in no time.

But, in many respects, the future is already here. With a current population of 330,000, Vaughan now serves as the region’s largest employment centre where it is home to more than 11,000 companies, 200,000 jobs, and boasts an average five-year employment growth rate of 4.1 percent.

And, having been named the 20th Best Place to Live in Canada by MoneySense in 2016, we can be sure that Vaughan’s role as a popular work and living destination in the GTA will only become more popular in the days to come.

There are certain locations in the world people connect with. It’s the concept of living with the graceful notion of fulfillment, contentment and happiness, especially with the place you would call your home. The region itself has to reflect the journey of your existence. The VMC could be that place. Why not make it your next new address and neighbourhood? This is the time to buy or invest, because the prices of these units are sure to rise from being in the most sought-after new neighbourhood in the GTA.

List of New Condos in the Vaughan Metropolitan Centre Neighbourhood