There is a lot to love about expansive developments -- these types of projects are ideal in transitioning cities that are looking to urbanize and build up. Luckily, one of these ambitious projects is headed to one of GTA’s most fastly growing cities.

Oakvillage Urban Living is part of the multi-phase Oakvillage master-planned community coming to the burgeoning city of Oakville. The project from Minto sits at Trafalgar Road, one of the neighbourhood’s most central streets.

This multifaceted neighbourhood is inherently modern in its design and concept, and is particularly large-scale -- making it the perfect opportunity for investment in such a successfully urban suburban city. 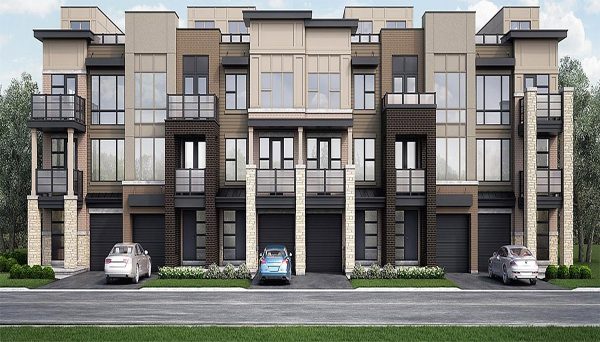 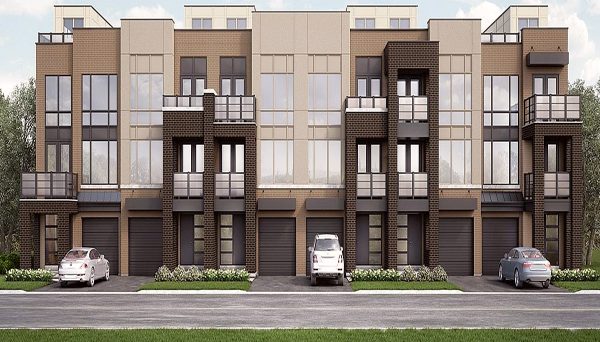 Oakvillage Urban Living is an expansive townhouse development involving 212 units. The modern homes boast stunning uniform exteriors that are uniquely chic. Featuring a mix of materials including stucco, stone and wood, the colour blocking of the design is truly stunning.

The projects contemporary aesthetic makes it well suited for the upcoming development that is still expanding and building up. The architecture makes for a charismatic and trendy community that is bound to attract a wide variety of people to the up and coming area. The townhouses will feature an open concept design, and are anticipated to include balconies.

This project is only one of the community’s multiple phases. Another, is a two-phase townhome development from Branthaven comprised of 228 units. An additional project dubbed “The Oakley,” is another townhome project that is also slated to stand in Oakvillage.

The master-planned community boasts an overall modern design that is both contemporary and engaging for residents. It will place residents in the centre of an incredibly scenic area with woodland and walking trails, ideal for those who like to enjoy the wonderful outdoors. The development is intended to bring to life an inviting neighbourhood that is both aesthetic and harmonious.

This development’s site is centrally located in a region on the rise. It boasts a walkscore of 70, and is nearby a variety of bus lines. Residents will have access to the GO Train or Highway 403 and 407 to get into the city. This seamless travel into the city makes this development -- and area -- ideal for young professionals and families alike.

Professionals will be able to utilize the job opportunities in Downtown Toronto, while living removed in a charismatic suburb. There is something to be said about establishing roots in a suburb where you can raise your family, while working 9 to 5 in the bustling city centre. Transit and highway access truly makes the options endless for this development and the city it lives in.

The increasing amount of people attracted to the aforementioned balanced lifestyle is evident in the city’s growing population. The population saw a 6.2% increase between 2011 and 2016. In 2016, the region's population clocked in at 193,832 people.

Families will flock to this area for its proximity to the city’s jobs, as well as immediate jobs. Major life science and media companies among others headquartered in the region include Ford with 3,491 employees, AMEC with 535 employees, and Tim Hortons with 760 employees -- and that’s just to name a few.

The city has also become one of Ontario’s most affluent neighbourhoods, boasting an annual household income of $169,786 as of 2015. This is plain to see in the influx of developments, companies and initiatives coming to the city.

Residents at this development will find themselves being able to enjoy the attractions of Oakville like the scenic waterfront and its shops and restaurants. It’s also worth mentioning that not only does Oakville provide stellar access to the city core, but it is also neighbours with Mississauga -- another urban suburb in its own right.

Square One, a mere 15 minute drive from the development, will be an epic walk-in closet for residents. The mall -- which is Ontario’s largest -- spans 2,200,000 square feet, is home to over 360 stores, and opens its doors to over 24 million customers a year. With a large variety of stores, attached grocery stores and a movie theatre inside, this isn’t only an ideal entertainment centre. It also provides ample job opportunities for those living in Oakville.

With an influx of developments, jobs and entertainment, Oakville is showing no signs of slowing down. The time to invest in this increasingly contemporary city is now, with the addition of this development that is part of an expansive and ambitious community.

This is an integrated development and property management company that’s been building communities for over 60 years. Their work includes rental properties, single-family homes, condominiums and commercial space and can be found across Canada. Their projects have won them numerous awards, including EnerQuality’s Ontario Green Builder of the Year in 2012, 2014 and 2015.