A new dynamic and ambitious condo development is looking to grace Oakville.

The Wilmot Condos is a new mid-rise condominium condominium by WP Developments in Oakville. This pre-construction project is located near Trafalgar Rd and Dundas St East right at the entrance of the Uptown Core.

This development will consist of an expansive u-shaped tower expected to rise 9 storeys high. The proposal will house a total of 380 condominium units and three levels of below-grade level parking. 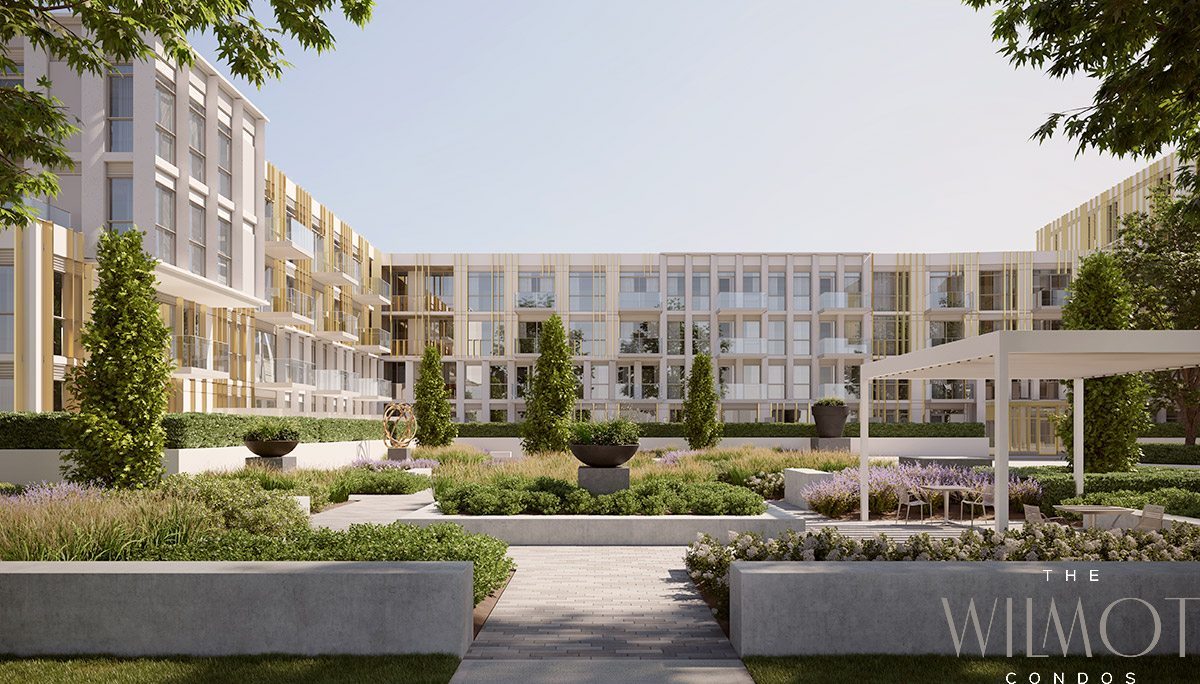 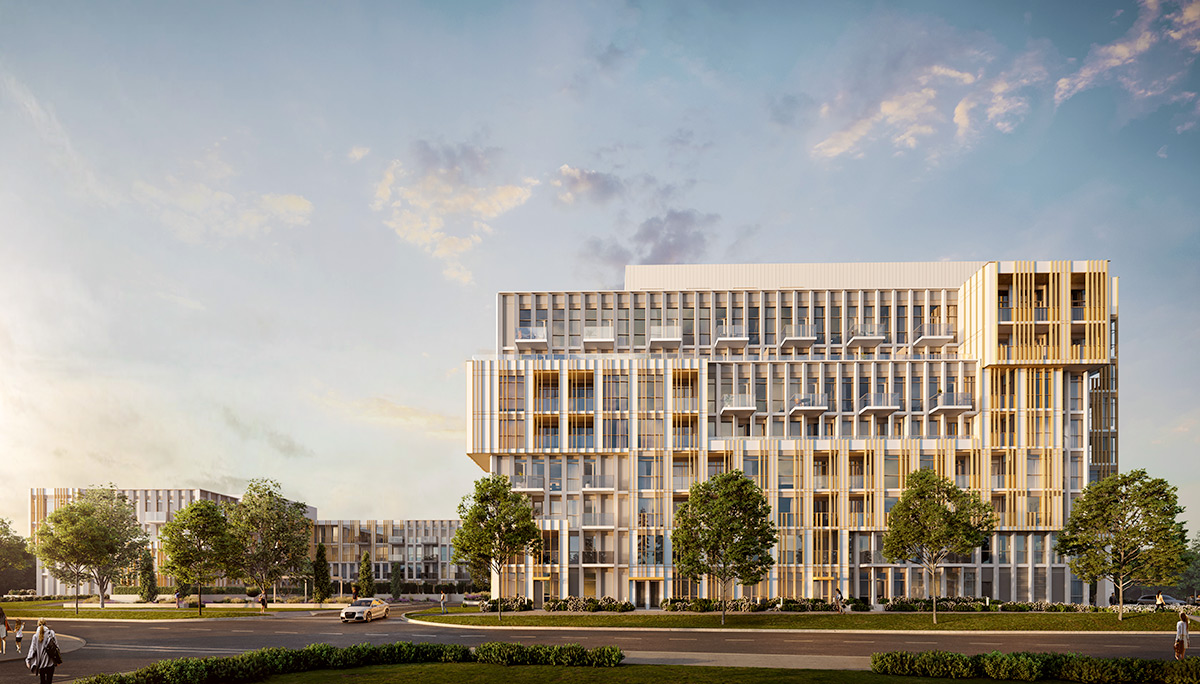 The Wilmot Condos is proposed to be an elegant mid-rise condo bringing elevation to a mostly low-rise neighbourhood. The proposal consists of a unique u-shaped residential building fronting onto Eighth Line and Dundas Street East and will feature a central courtyard.

The tower will rise 9 storeys and will feature varied elevations to ensure privacy from the public realm.

The combined unit count will total 380 condominium dwellings with a wide range of housing opportunities and a variety of unit types and sizes. The units will be available in one to three-bedroom units ranging from 441 square feet to 1,108 square feet. 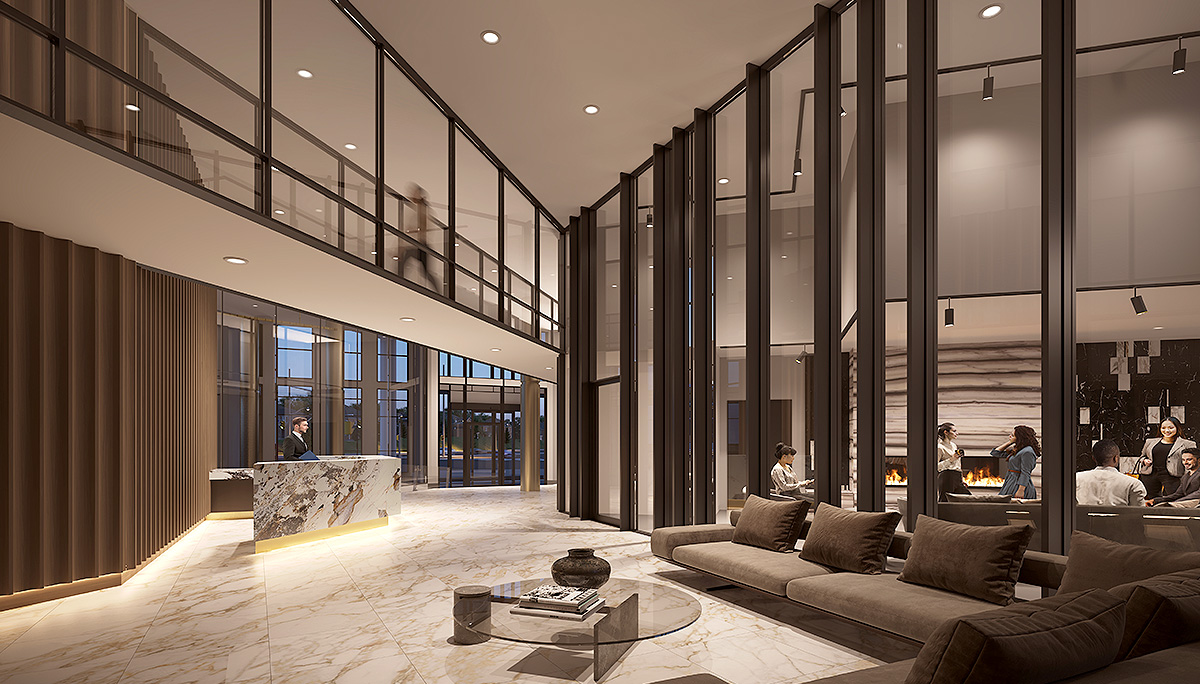 The building will feature 708 square metres of indoor amenity space and a three-level parking garage. A large portion of the amenity space will be located on the ground floor where residents will find a plethora of convenient facilities.

The ground floor will include an entrance welcoming guests and residents into a grand two-storey lobby with stunning contemporary designs and a 24-hour concierge. Connected to the lobby, residents can make use of the double-height full-sized gym, a changing room, zen Yoga studio, pet spa, automated parcel room with an overflow for larger parcels, and an event lounge perfect for hosting soirees. 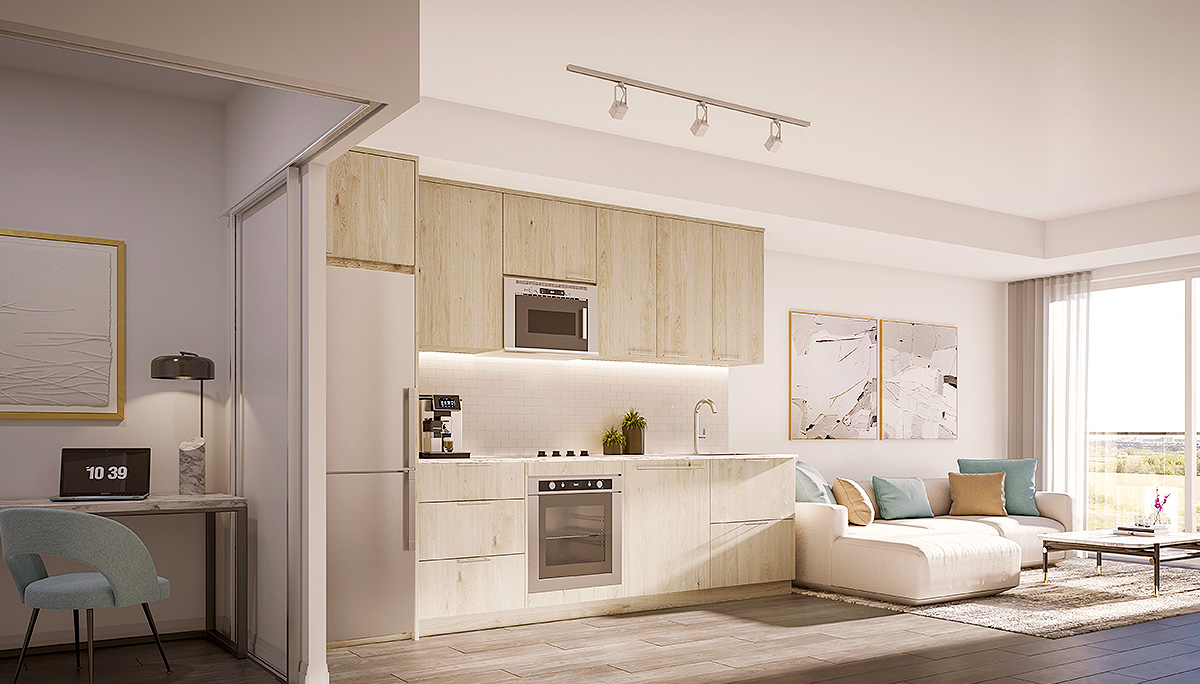 In the centre of the development, residents can come to relax in the beautifully landscaped communal courtyard. The rooftop terrace will also house patio chairs and lounging spaces with fire pits and bbq stations for hosting intimate events. 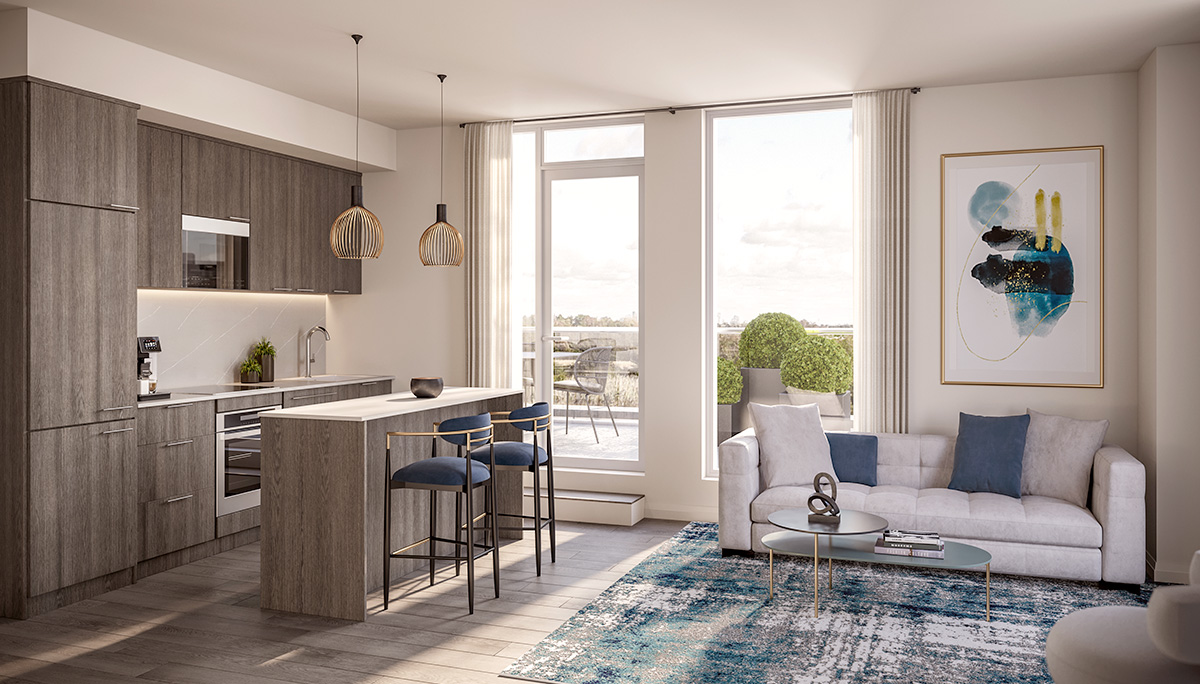 The building's façade incorporates architectural elements and materials such as a blend of glass, textured panels, metal cladding, and textured concrete that creates a dynamic modern design and enhances its appearance along the public realm.

Gold-metal fins placed strategically across the surface catch sunlight during the day and moonlight at night, and white quartz stone anchors the building. The eye-catching design stands out in contrast with the style of the surrounding development to create a landmark in the area and promote the intersection as a gateway into north Oakville. 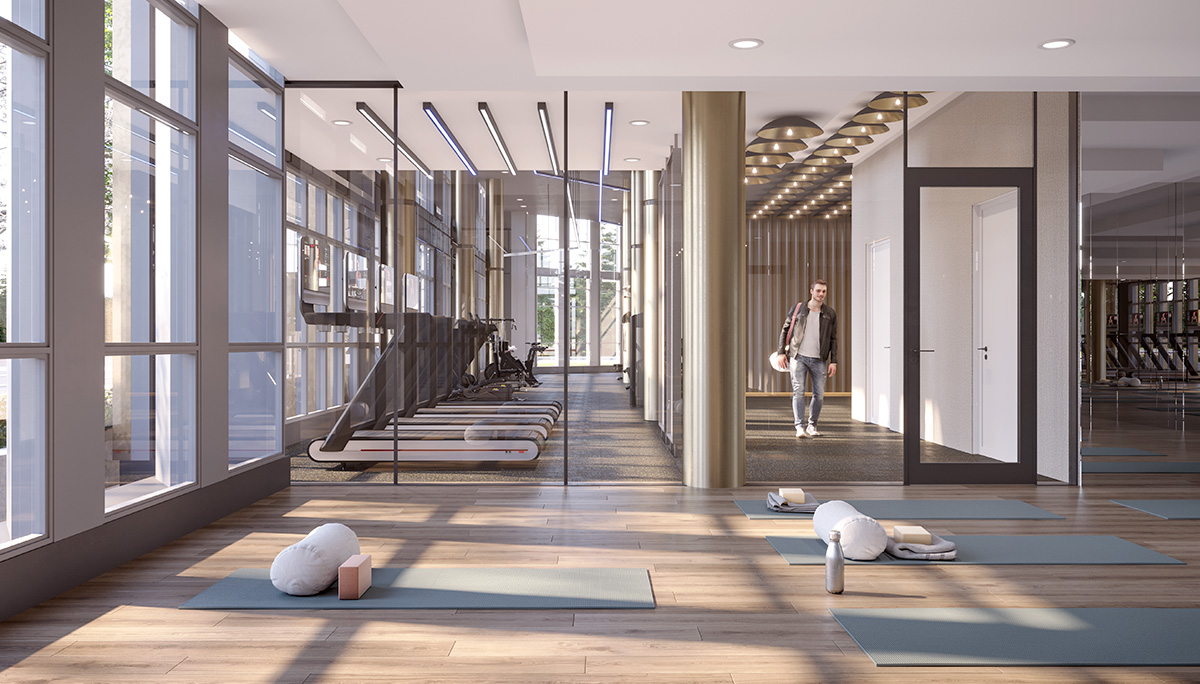 This development will also be created with multiple sustainable features in mind, we see more often sustainability is becoming a common theme in real estate. With that said, each unit will feature a balcony for private amenity space and the buildings will have a combination of active terraces, green roofs.

The towers will also feature white albedo roofs to reduce heat island effect as well as provide at-grade and rooftop outdoor amenity space to residents and visitors. The buildings will also include landscaped features such as native/non-invasive plant species and drought-tolerant plants to keep up with the lush green surroundings. 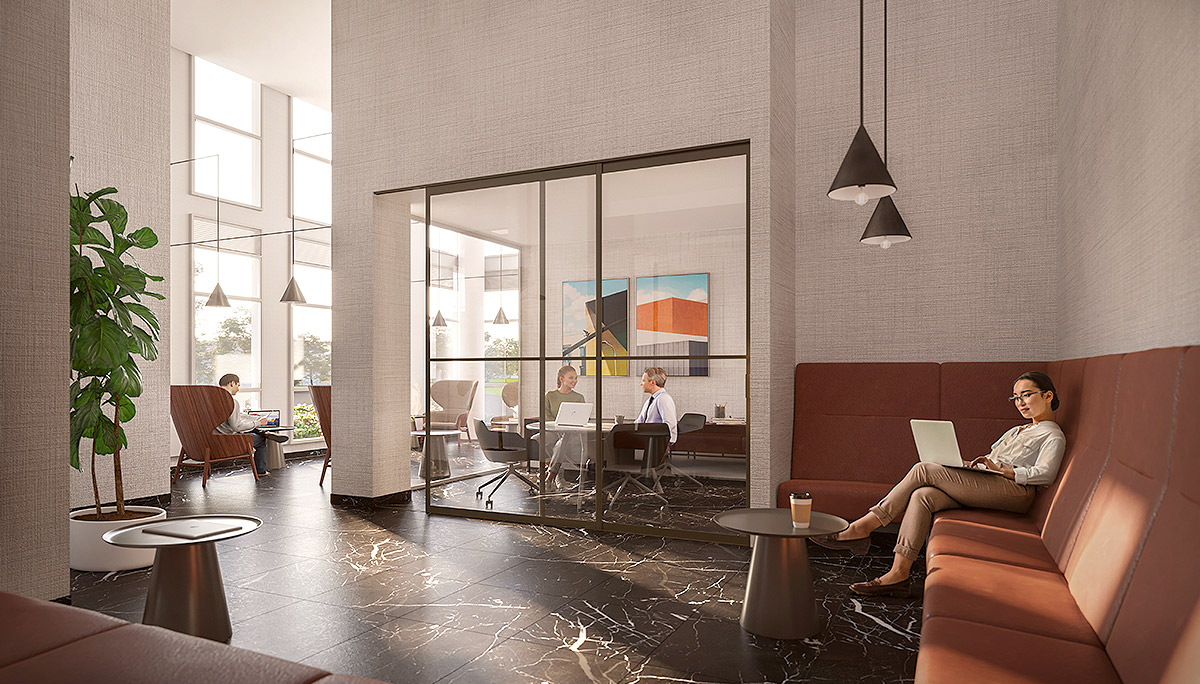 The Wilmot Condos will be located in Halton Region’s rapidly growing town, Oakville. The site will sit right at the entrance of the near Trafalgar and Dundas. Investors can expect major growth from Oakville in the coming years as the city has many government and city implemented plans and goals.

In 2016 Oakville’s population clocked in at 193,832 residents, a 6.2% increase since 2011. This growth has outpaced that of Toronto, which only grew by 4.5% over the same time period. It’s estimated that by 2031, that number will grow to approximately 255,000 people.
Oakville is a family-oriented suburban region, with lots of growth potential. This area is traditionally regarded as a place full of low-rise detached housing. Detached homes accounted for 91% of home sales last year, followed by farms with 6% and rural homes at 3%. But as we so often see the condominium trend is slowly making its way into the town.

Here you’ll find many reputable elementary and secondary schools in this pocket, which has one of the highest ratios of private schools to student populations in the country. There are also a multitude of parks in the area, the one’s in walking distance include Postridge Park, Dalebrook Park and Memorial Park. The town also hosts multiple local events such as the Downtown Oakville Jazz Festival, Waterfront Festival, For the Love of the Arts Festival, Midnight Madness, and the Oakville Family Ribfest.

The Dundas and Trafalgar intersection acts as the region’s main commercial district. The whole area serves as a one-stop-shop for residents. There are major retailers here, such as Canadian Tire, Walmart Supercentre, The Keg, Kelsey’s Original Roadhouse, and Nando’s as well as cafes, banks, and liquor stores.

WP Developments have been building homes in the GTA since 2013. These developers have made it their mission to constantly exceed expectations in every facet of the real estate development industry. They’re doing this by approaching their projects with a client first mentality. This can be seen in each one of their homes, whether it be in the form of detached houses, condos, or townhomes, you can expect the very best from this developer.