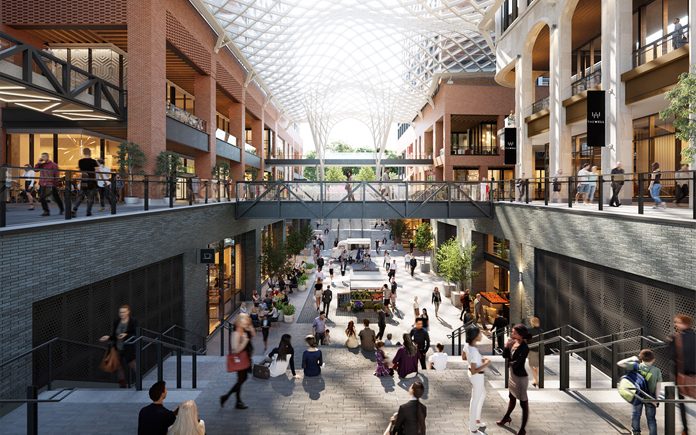 Construction is starting for one of the biggest projects coming to the downtown core. It is known as one of the most ambitious mixed-use projects in Canada. This master-planned community will be unlike anything else we have ever seen or experienced in this city. The project will consist of seven towers, three will be residential, three will be dedicated to rentals and one will be an office tower. The Well will transform the downtown core and will provide a common space where people can connect personally, professionally and build meaningful experiences. This expansive project will be created by a team of reputable developers. Tridel will be the developer of the residential condominiums, Woodbourne Capital Management and RioCan Living will be the developers of the rental buildings, RioCan Living and Allied Properties will develop the office tower and retail portion of the complex. Investors can be rest-assured that this group of top developers will provide one of the best master-planned communities in the city. 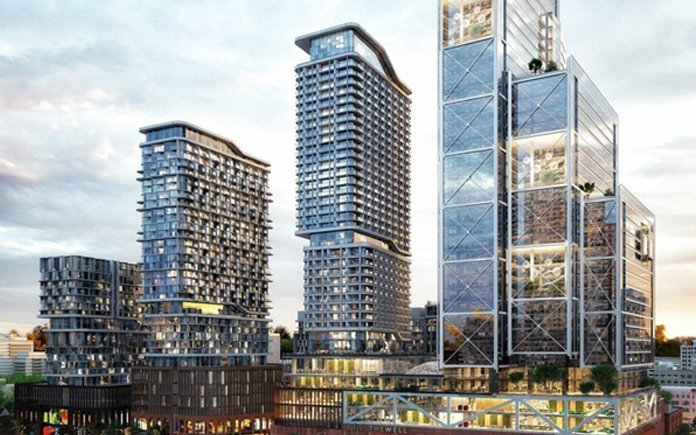 This project will be built on the former site of The Globe and Mail building and will border Front Street West, Spadina Avenue and Wellington Street West. The site will be the central hub between the entertainment district, financial district and the waterfront. Residents will have access to all of the neighbourhood amenities the downtown core has to offer.

The Well is expected to hold 1.5 million square-feet of residential space, 500,000 square-feet of retail space and over 1 million square-feet of office space. The site alone will take up 7.8 acres of space. Recently, Mayor John Tory promoted The Well in a media conference stating that it will be 10 times larger than the average condo development and will transform the city. Right now, the project is creating 1,600 construction jobs, will employ 5,000 people in its office space and 1,200 jobs in the retail, commercial and restaurant sectors. 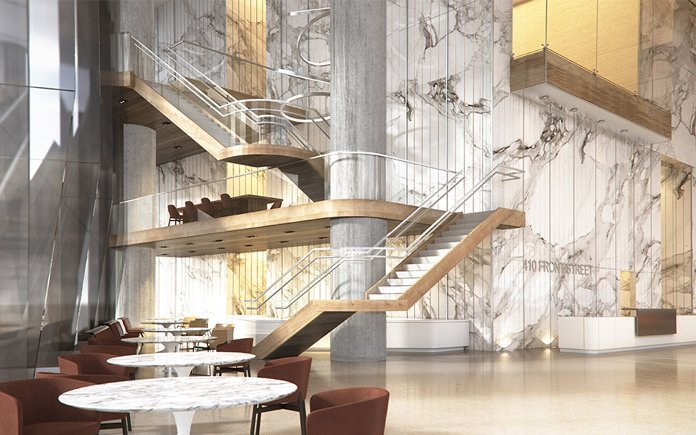 The interior of the workspace

Not only will The Well Master-Planned Community transform the city, residents and visitors can also expect a 21.7 acre park just south of the site. This highly-anticipated park will be known as Rail Deck Park and will span between Front Street, Bathurst Street and Blue Jays Way. This expansive park will be built over the existing Union Station rail corridor. This park is said to be ‘The Central Park of Toronto’ and will connect different neighbourhoods in the city that are currently separated by the railways. The park will boast an expansive, beautiful green space, play area, large colourful trees, water features, public art, pedestrian walkways and more. Not only will this new park encourage tourism, promote healthy living and connect communities, it will also increase the value of The Well condominiums once built. 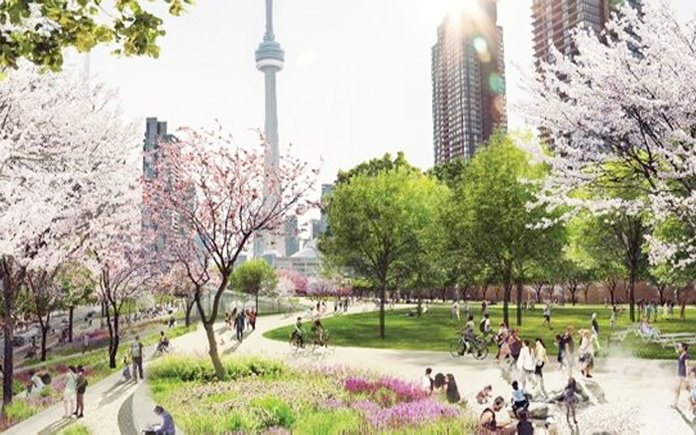 The first residential building will be known as Classic Series I and will consist of 38-storeys and 400 suites. These suites will have one to three bedrooms plus den, ranging between 491 to 1,288 square-feet. The second building will be known as Classic Series II and will consist of 28-storeys with 258 suites. Similarly to the Classic Series I tower, the suites will range between one bedroom plus den to three bedroom plus den and will vary in size between 509 to 1,419 square-feet. Finally, the third residential tower in the complex will be called the Signature Series and though it will be a little smaller in size, it will hold the largest and most high-end suites in the complex. The Signature Series will be a mid-rise tower reaching 14-storeys high and will have a total of 98 suites. The suites will start at two to three bedrooms plus den and will range between 1,059 to 3,253 square-feet. Investors can expect these three residential buildings to be completed in 2022. 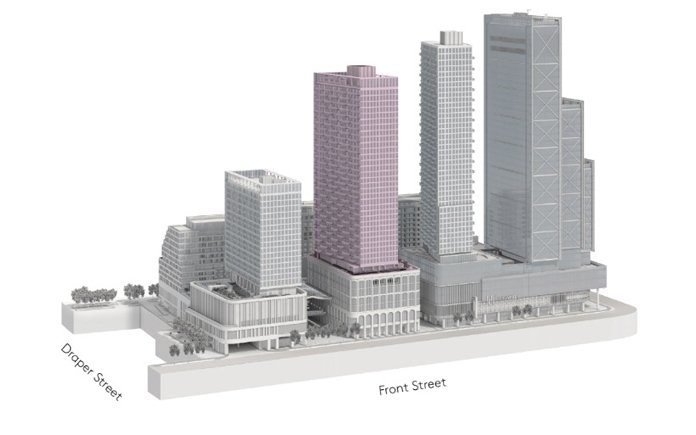 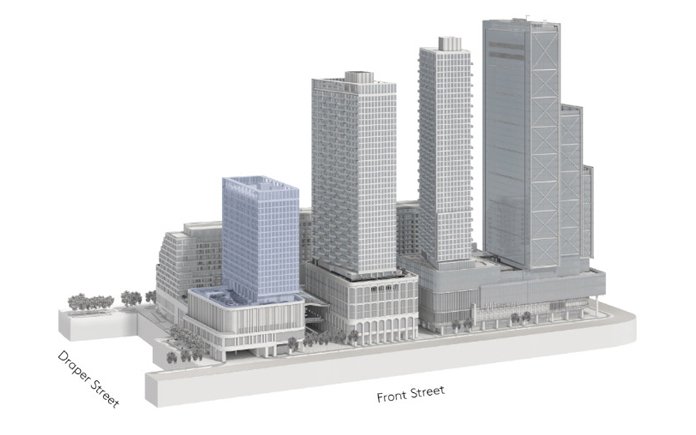 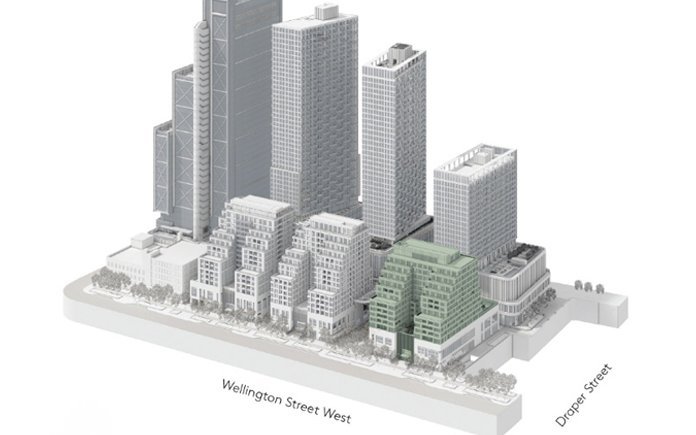 The retail space in this complex will be one of the biggest in the city and will be similar to a mall with indoor and outdoor elements. The outdoor space will be covered by glass canopies to provide the most natural light and protect shoppers from weather. The retail area will consist of three floors where residents and visitors alike will find a wide variety of shops and services including restaurants, fitness, beauty, health, entertainment and home decor. Residents will have everything they could ever want or need in one location. 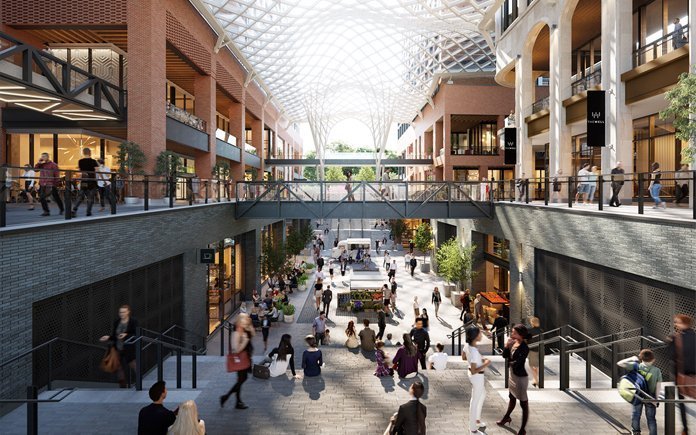 One of the most important aspects of the marketing of The Well is the logo. The logo has five significant lines (or pillars), each pillar has five meanings. The five pillars mean eat, shop, work, live, play. These pillars are significant because they define the lifestyle The Well will provide its residents. Whether residents want to work in the same complex that they live in, head to the retail space for dinner or a cocktail or head to the gym, everything they need will be in this area.

As if this project wasn’t innovative enough, the developers have partnered up with Enwave Energy Corporation to extend their Deep Lake Water Cooling (DLWC) system to the site. DLWC is a new approach created by Enwave to provide cold and hot energy to large complexes such as residential and commercial buildings, government buildings and hospitals in the downtown core. This system has a climate-friendly approach by reducing carbon emissions and preserving energy. This new partnership will provide The Well with two 6-million litre tanks of water underneath the site that will circulate low carbon cooling and heating services throughout the complex and to nearby properties. These two thermal tanks will store temperature controlled energy in water which will be distributed and looped through a series of connected pipes during a series of peak times. The energy will then be recycled back into the tank and will be stored during off-peak times so it can be conserved and redeployed when it’s needed. Not only will this innovative approach be good for the environment, it will also help home-owners by reducing maintenance fees, reducing capital costs for home-owners and developers and will provide reliable heating and air conditioning. 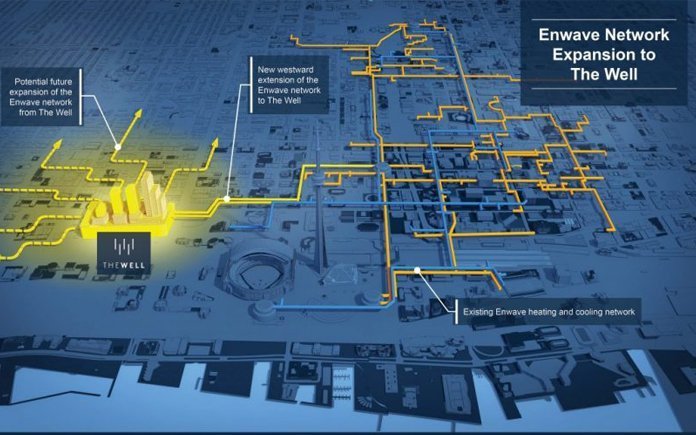 To learn more about The Well Condominium, click here. The Well Condos are now selling! Register today to receive Platinum Access to the best floor plans and prices.