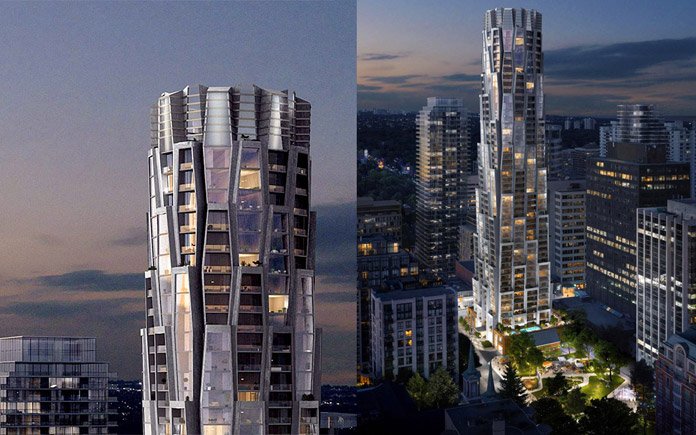 London, New York City, Paris, Taipei and now Toronto are on the list of cities where Studio Gang Architect and Design Firm will have left their mark of iconic buildings and structures. What makes Studio Gang so unique? Why have the world's top countries for design and architecture enlisted Studio Gang to add their special touch to their skylines? A simple Google search of their projects will blow you away. That's why.

This powerhouse Chicago-based studio unveiled its first Canadian project back in 2018: One Delisle Condos developed by SLATE Asset Management - a skyscraper made up of stretched hexagonal layers resembling a honeycomb topped with terraces and planters. The project will anchor the corner of an entire block in the Yonge and St. Clair area. The building's design is unlike anything yet seen in Toronto, which is to be expected from Studio Gang.

Now, as the condo project launched to the Platinum Access community, we are seeing great fanfare. The 'Studio Gang Effect.’

But who is Studio Gang Anyway?

Founded by Jeanne Gang, this architecture and urban design firm is a collective of more than 100 architects, designers and planners who collaborate closely with clients and expert consultants to realize innovative projects at multiple scales. Some of their top projects fall into categories such as architecture, urbanism, interiors and exhibitions, with the sole purpose of connecting people with each other and their environment. Among Gang Studio's completed buildings are Kaohsiung Maritime Cultural & Pop Music Center in Taiwan and the Aqua Tower in her hometown of Chicago. She is also building a new 95-storey tower in the city, Vista Residences, set to be the world's tallest building designed by a woman. The firm itself has won numerous awards, including the Architecture Merit Award in 2020, the 2016 Architizer A+ Firm of the Year Award and the 2013 National Design Award from the Hewitt, Smithsonian Design Museum.

However, the highly-certified founder is not without her own accolades. Jeanne is a Professor in Practice at the Harvard Graduate School of Design, her alma mater, where her teaching and research focus on the cultural and environmental aspects of buildings' reuse. She is the author of three books on architecture, and a monograph of the Studio's work, Studio Gang: Architecture, which was published in summer 2020. Her work has been exhibited widely, including the Museum of Modern Art, the International Venice Architecture Biennale, and the Art Institute of Chicago. In addition, she was named one of 2019's most influential people in the world by TIME magazine, where they wrote:

"For Jeanne, architecture is not just a wondrous object. It's a catalyst for change. Her sleek, woody boathouses are helping to revive the polluted Chicago River by filtering runoff organically. Her Polis Station concept aims to improve the way civilians interact with law enforcement by fusing police stations with civic, recreational centers." (Time 2019).

Jeanne and her team are also committed to sustainability, and we see this in One Delisle's design. As they actively and ambitiously pursue the strict Tier 2 of the Toronto Green Standard, the balconies are designed to help create an overhang that minimizes direct sunlight in the summertime and optimizes sunlight exposure in the winter. Plus, a solid wall on either side of most balconies. With this design, residents can use their balconies as enjoyable outdoor space year-round. Approximately, 40% to 60% of the building’s facades will be opaque, which will allow for better insulation and create a more energy-efficient building. Lastly, bird-friendly glazing and renewable energy sources are being explored.

And speaking of birds, Dwell Magazine's November/December 2019 Made in America issue highlight's Jeanne's study of bird's nest, which is where she says she draws inspiration from. She writes in the publication that she finds bird's nests as low-impact structures. "As I've continued to study nests, I've come to understand nesting as less about establishing a permanent home and more about the art of living lightly on the planet..."

Do Consumers Care About Owning a Sustainable Property?

Over the past several years, the need for 'sustainable lifestyles' has become imperative. In PWC Canada's 2019 Consumer Insights Survey, the company explored Canadians’ views on several issues, including their attitudes towards sustainable shopping practices. "It showed that when it comes to food and non-food purchasing decisions, many consumers are willing to pay a premium for products that are local, organic and ethically or sustainably produced...With environmental concerns becoming a rising consumer focus, businesses need to think about tailoring their products and experiences to meet customers' desire for sustainability". Meanwhile, "88% of American and UK consumers want businesses to help them make a difference", according to Forbes.com. Their report on a survey conducted by a logical sustainability consultancy firm, Futerra, revealed an overwhelming demand for brands to step up on sustainable lifestyles.

It is not just the rich and famous (who I might add are some of Jeanne's biggest supporters), but everyday consumers are looking for homes, whether to live in as an owner or renter, that is going to lighten their carbon footprint and make a difference in the world.

The work Jeanne and her Gang do for communities is top-notch, and One Delisle is no exception. This high-profile development will influence future construction trends by leading by example. While several Toronto financial and educational institutions are likewise certified for Leadership in Energy and Environmental Designs (LEED), this stunning combination of sustainability and aesthetics looks to take the city's architecture to the next level.

Additional information on this project can be found here. Want to be the first to receive Platinum Access to the best floor plans, pricing, promotions and all other information as they become available? Register below to join the GTA-Homes Platinum Access Club.