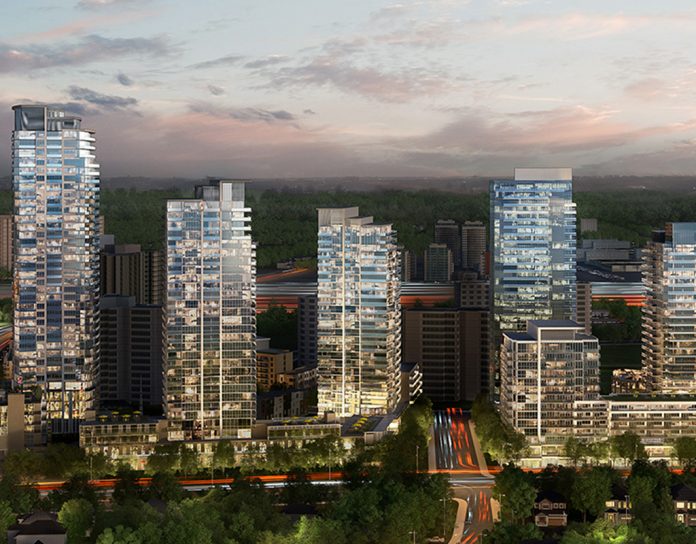 Master-planned communities – a type of development that is meticulously designed to incorporate a range of buildings and features like parks, lanes or community resources – are popping up all over the GTA.

From the expansive SmartCentres Place in Vaughan’s new downtown core to M City, which sits next to Mississauga’s Square One Shopping Centre, developers are realizing that today’s homeowners want to live in more than just a residential tower. They want shops, services and greenspace at their fingertips, so they can experience an overall sense of community.

We love the idea of these kinds of projects for many reasons. Here’s a rundown of our favourites:

Access To Some Of The Newest Amenities And Infrastructure

Many of these master-planned communities incorporate an extensive roster of facilities, since they anticipate an influx of new residents. Sometimes these are similar to what you would find in any condominium — like pools, fitness centres and party rooms.

In some cases, especially in larger projects, you might find more comprehensive additions, like community centres or schools. Emerald City, a master-planned community in North York, for example, features the 50,000 square-foot Parkway Forest Community Centre. This includes a full-sized running track, a rooftop garden, a teaching kitchen and a daycare — among other perks.

Larger projects might include entirely new streets or transit routes, and even smaller developments usually include courtyards and pedestrian walkways. Not only do you benefit from having these resources at your fingertips, but you’re getting them brand-new — which is even better.

You Have A Better Idea Of The Area’s Future

Sometimes buyers bank on under-utilized neighbourhoods or “developing” areas, hoping that they will eventually build up, densify and become the next hip district. Sometimes this actually works, but when you’re buying in a master-planned community it takes some of the guesswork out of the situation.

Many of these communities are built in phases, which the developer will have renderings and plans far well in advance. This means you know upfront if that parking lot next door is slated to become another tower, or if there’s a school planned for the complex that might bring families to the area.

If you’re buying in one of the larger communities — Downtown Markham, for example, will eventually include over 200 acres — that’s a sizable part of the region that’s already planned out. You will ultimately have the advantage of knowing that plan in advance.

People in these kinds of developments tend to share a common interest in building their home and creating the surrounding community. Seeing your immediate area come to life and evolve – likely from a site that was long neglected or under-utilized – is a source of great pride for many.

A good example of this is the Regent Park Revitalization. This neighbourhood stands on the eastern side of Downtown Toronto, but for decades it had been left in disrepair. This all changed when the city worked together with the Daniels Corporation to transform the neighbourhood into a new and dynamic community, complete with one of the best community centres in the GTA. People are proud to live here again, and this can be seen with the price per square foot going from around $400 PSF in 2009 to over $800 PSF in 2018.

If you live in a master-planned community in a neighbourhood that has any potential for growth, your new community might set the standard for it. Developments sometimes follow other developments, which means you might end up having even more great resources in your part of the city.

Auberge on the Park, for example, will attract a lot of new attention — especially because the Eglinton Crosstown will make the area infinitely more accessible.

Above All Else, It Just Makes Sense

People like the idea of being able to pop out on their lunch break and run some errands in the same complex as their office. Similarly, they like being able to do those things near their home too.

Why drive to a park on a Saturday morning to walk the dog when you could have one down the street? Or take the subway to get groceries when you could have a Sobeys on the ground floor of your building? Having conveniences at your fingertips means more time spent with your family and friends and, ultimately, more time to enjoy life on your terms.

Client Stories: Referrals Are What Friends Do For Friends

New First-Time Home Buyer Incentive Can Save You Up To $286...