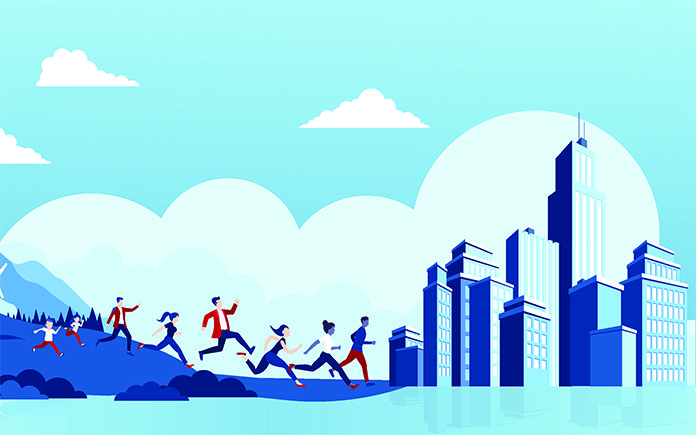 There is a great urban myth that is making headlines lately regarding the Covid-19 pandemic that suggests there is an urban exodus away from major cities.

It is surprising to see some real estate industry experts and news media outlets draw wild conclusions that are trying to suggest that people are migrating away from Toronto and the downtown core to the suburbs.

The urban exodus theory has been around for a very long time and is not only relevant to Toronto.

In fact, this issue has targeted all major cities across North America such as New York, San Jose, Los Angeles, and even Philadelphia, suggesting that people are fleeing the core of these cities mainly because of affordability and a desire for more space.

While there are some people who want more space and need affordable housing, the reality is that there is no clear evidence supporting any of these urban exodus theories.

The vast majority of these claims are made by some professionals who correlate anecdotal real estate statistics with broad trends in migration patterns.

The most popular argument to date is that because month-over-month home sales were higher in the suburbs than in some parts of Toronto that this means home buyers are exiting or moving away from Toronto to live in the suburbs.

Comparing strong home sales data in one region versus another needs to be looked at with context. Home sales data cannot be used as proof of an urban exodus.

To say, for example, that Toronto had weak home sales versus another region that had strong home sales during the same time period does not automatically mean there is an urban exodus away from Toronto.

There are many reasons why some regions have stronger home sales data than others in any given time period.

The trend we’re seeing now is that some industry professionals from the academic and real estate world are speculating about where people are migrating.

The common theme is correlating strong home sales in suburbs like Barrie with weaker than normal home sales in Toronto and using that as evidence to suggest people from Toronto are moving to Barrie.

This isn't a very scientific method for explaining migration patterns because there are many reasons for strong home sales that are not connected with someone physically moving from one location to another.

Looking strictly at anecdotal home sales data on a month-over-month basis does not tell us where people are migrating or that people are leaving Toronto to live in the suburbs.

Unfortunately, too many people view migration as the city versus the suburbs, but that isn’t the case as we are finding that there are some people who prefer living in the core while others simply enjoy suburban living - the two are not necessarily competing with one another.

What is clear when looking at current and future data projections by Statistics Canada is that more and more people are moving into the city as opposed to the suburbs.

Is There Really an Urban Exodus?

To suggest that there is an urban exodus causing people to abandon major cities such as Toronto would have to be supported by data showing evidence of a population decline or migration out of the city.

To be objective, the idea of an urban exodus from Toronto is not completely false when looking at inter-provincial and intra-provincial migration patterns.

For example, when looking at the most recent migration data published by Statistics Canada, we can see that during the one-year period from July 2017 to June 2018 that there were approximately 113,832 people who migrated outside the Toronto CMA (Toronto census metropolitan area) to other regions in Ontario and the rest of Canada.

During that same time period, there were only about 70,455 people who migrated into the Toronto CMA.

It is important to note that these numbers are rough estimates based on information from Statistics Canada and there are gaps and assumptions in this data and analysis.

That being said, what this data tells us is that there are clearly more people moving out of Toronto than those coming in when looking only at inter and intra provincial data.

2017/2018 Interprovincial and Intraprovincial Migration by CMA

But, there is also a missing piece of information from this data: immigration.

Immigrants make up a large part of Toronto’s population and play a large role in population growth.

What’s interesting is that Toronto is the top destination of choice for recent immigrants across Canada.

If we look at the last two Canadian census periods between 2011 and 2016, Statistics Canada recorded approximately 356,930 (75.6 per cent) new immigrants who settled in the Toronto CMA out of the 472,170 total number of people who immigrated into Ontario.

And over the last several years, there were on average over 100,000 immigrants per year that chose Toronto as their final destination place when settling in Canada.

In fact, in 2019 Toronto welcomed approximately 118,000 immigrants, which represented the largest margin of immigrant intake when compared to any other Canadian city.

So when comparing the number of people leaving Toronto versus those moving into the city, you will find that there are approximately 74,623 more people migrating to Toronto per year than those leaving the city.

This data tells us that there is a net positive inflow of people moving to Toronto as opposed to leaving the city on an annual basis.

These facts challenge the assumptions made by those promoting the idea that there is an urban exodus away from large cities or central cores of cities like Toronto.

*There are approximately +74,623 more people migrating to Toronto per year than those leaving the city.

In addition, a recent 2019 report prepared by RBC senior economist Robert Hogue found that despite the high cost of living in cities like Toronto, more young people were actually moving into the city rather than moving out.

The report looked at population growth for the 20-34 age cohort and found that for every one person that leaves the city there were at least seven young people that were moving into the city.

What’s also interesting is that based on 2016 Census data, approximately 54.7 per cent of immigrants that arrived in Toronto were at least 25 years of age and older, which is an age group that is ready and prepared to start contributing to the economy (source: 2016 Census: Housing, Immigration and Ethnocultural Diversity, Aboriginal peoples).

Now some will say that the Covid-19 pandemic has changed everything - from the way we work to where we want to live.

But, history tells us a different story.

Even during the Spanish Flu, which killed around 50 million people worldwide, major cities proved to be resilient by offsetting economic losses and attracting more people into these highly dense urban city centres.

Let’s take Toronto as an example. In the decades between the pandemic that spanned 1911 and 1931, Toronto’s population actually surged from 377,000 to 631,000. Therefore, even pandemics that were much more deadly had little effect on urbanization and the overall long-term population density and growth within major cities like Toronto.

While we can’t predict the future, we can draw lessons from past pandemics that show how resilient Toronto is in being able to consistently attract new talent and drive economic growth into the city.

Those who continue to promote claims of an urban exodus are presenting an anti-urban bias that is trying to paint a picture that isn’t true.

Once the pandemic is behind us, it is likely that more young people will continue to migrate into Toronto and the downtown core.

Human beings are social creatures and the idea of a pandemic shifting everyone to a permanent work-from-home situation is unrealistic.

Toronto is where the jobs are and that is what will continue driving real estate growth, along with high immigration numbers into the city that fuel demand for housing.

The bottom line for investors: Toronto will continue to be the leading economic engine for Canada that will survive the pandemic and be even stronger in the decades to come.

Everyone knows that Toronto is the top destination of choice for the 1.2 million immigrants coming to Canada over the next 3 years.

So, from a condo investment perspective, this means that those who choose to buy today while everyone else is fearful can be one of the smartest investment decisions you can make.