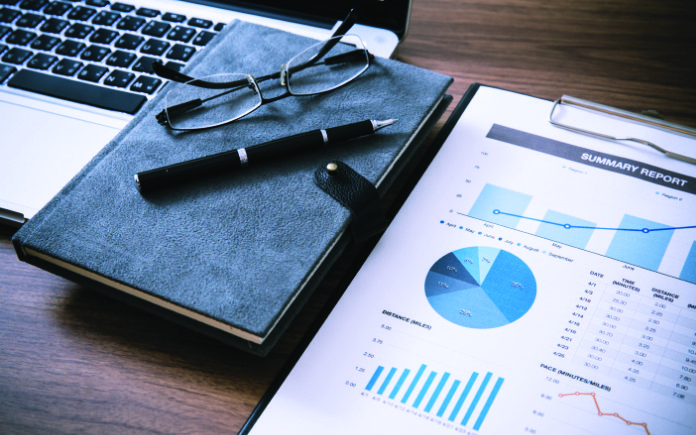 It appears that the ramifications of the COVID-19 pandemic on the real estate market have finally reared its ugly head. The second quarter for 2020 provided a glance at not only how the broader Toronto real estate market responded to the pandemic, but how this impacted the condo segment.

The Q2-2020 Condo Market Survey Highlights released on Monday by Urbanation Inc., a leading source of information and analysis on the condo market since 1981, gives avid condo investors insights into market responses due to the ongoing crisis. Many pundits within the real estate market forecasted a “doom and gloom” type of economic outcome because of COVID-19 and Urbanation’s most recent Q2 survey results that seem to show that the condo market froze. As the pandemic intensified, most real estate activity came to a halt, but what we’re finding now is that the hot spring market is seeing more condo project launches during the summer. Typically, the spring and fall seasons are when most pre-construction projects are released, but because of this global pandemic the summer has become the time when condo developers are now choosing to bring their projects to market.

According to the data released by Urbanation, the GTA condominium market showed an overall significant slowdown in the second quarter of 2020, with sales dropping to their lowest levels since the Great Recession in Q1-2009.

But, the story doesn’t end there. While sales have declined to an 11-year low, what’s interesting is that prices still continued to climb.

The following are some key takeaways from Urbanation’s Condo Market Highlights that investors should consider to help navigate and bring more clarity to these uncertain times in order to make solid investment decisions for the future. And, while turbulent, it is always prudent for any investor to look at the long-term bigger picture and not be confined to the quarterly economic ebbs and flows that often occur in most economies. 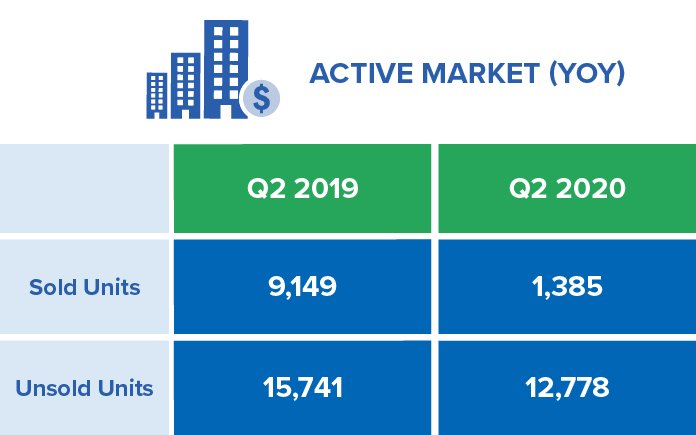 The results from Urbanation’s survey showed that although Q1 2020 sales reached a four-year high, it became clear that the COVID-19 pandemic was having a real impact on the real estate market that brought it to a halt from the mid-March to May time period. Consequently, a typical busy second quarter sales period witnessed a slump to 1,385 in total sales, historically the lowest since Q1-2009, which represents an 85% drop in year-over-year sales for Q2-2020 and 77% lower than the 10-year average of 6,044 units. 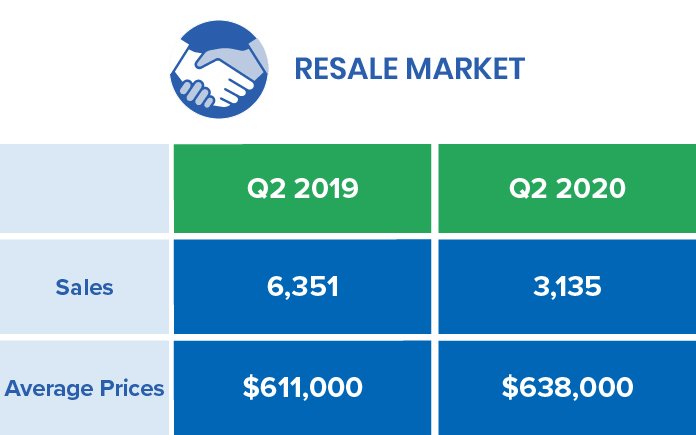 Meanwhile, resale sales data for Q2-2020 has shown a remarkable drop of 51% year-over-year, which is 45% lower than the 5,661 in resales over the 10-year average. Despite this sharp decline, what is interesting is that during the same time period the average price has actually seen a modest increase of 4.4% year-over-year. 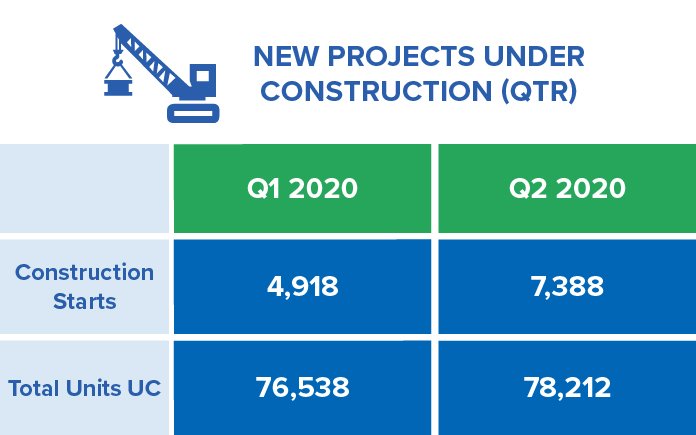 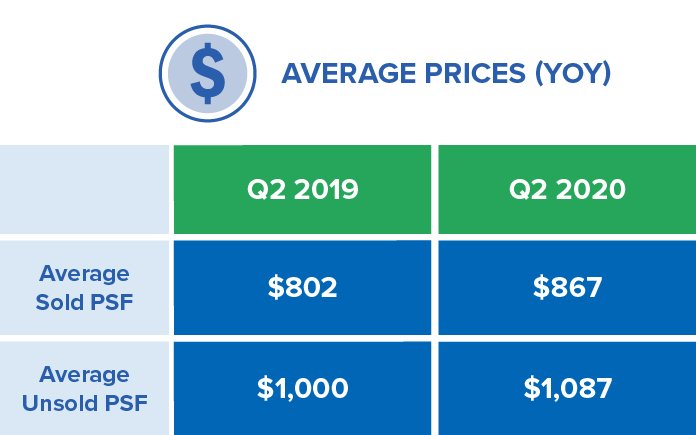 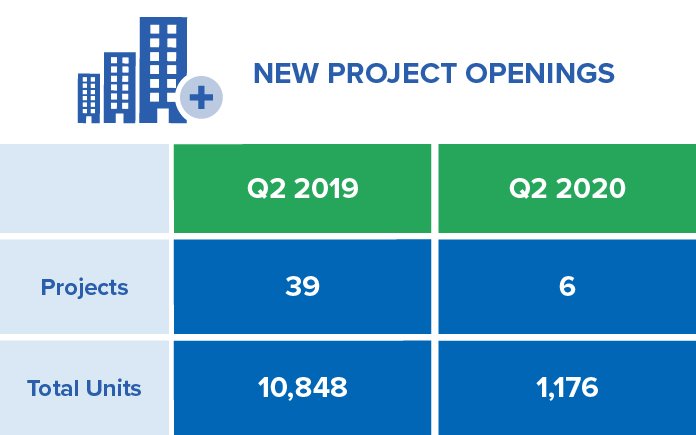 The true impact of the COVID-19 pandemic was more pronounced when looking at new condo project openings across the GTA, which saw a substantial drop of 89.2% year-over-year as sales declined to their lowest levels with only six condo projects and 1,176 units launched for pre-sale during Q2-2020. That being said, absorption rates still remained strong at 67%, causing unsold inventory to drop 19% year-over-year to 12,778 units. 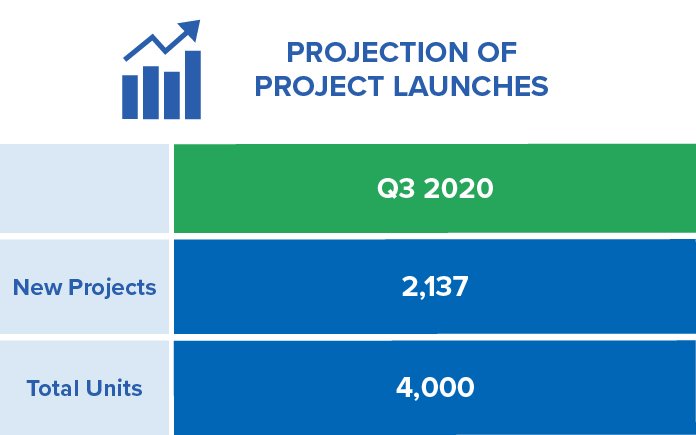 Additional insights can be seen for future condo project launches in Urbanation’s Condo Market Highlights. Data for the month of July already shows a total of 2,137 units launched for Q3 and this is projected to reach above 4,000 units, which would well exceed the 2,556 units launched when compared to Q3-2019.

The overall data from Urbanation clearly shows how the ongoing pandemic has altered the behaviours and decisions people make to both buy and sell properties during a crisis. Many sat on the sidelines thinking prices were going to finally see the mega drop critics have been wishing for, but this clearly hasn’t been the case.

The current decline in condo sales is likely correlated to the nature of the COVID-19 economic decline that has targeted young workers who are likely first-time home buyers seeking to purchase a condominium. Also, the involuntarily drop in immigration numbers due to travel restrictions has also been a compounding factor that has impacted the condo market.

Prior to the pandemic, the GTA accepted approximately 8,000 permanent residents per month since 2015, which has now declined to 1,520 per month in April and 3,630 in May.

Nevertheless, while home sales have seen better days, one thing that won’t change is the increasing demand for properties. Housing shortages are not going to magically fix themselves and require considerable effort by all levels of government to build more homes, especially in a metropolitan area like Toronto where on average over 100,000 immigrants are coming on an annual basis.

Recently, Toronto was ranked the fastest growing metropolitan area in North America, which has a population target that is expected to reach over 10.2 million across the GTA by 2046 and where the City of Toronto will be creating approximately 1.72 million jobs by 2041.

Hence, the upside to all of this is the Canadian economy is going to be entering recovery mode as pandemic restrictions are lifted and consumers begin property hunting from both a buyer and seller perspective. As the country begins to open its borders, the condo market is likely to see an uptick in sales volume as jobs are recovered and immigration in-flows begin to stabilize over the medium to long term.

A more accurate indicator of condo market conditions will unfold in the latter half of 2020, where new launches begin to ramp up and almost 14,000 condo units reach their completion stage. Therefore, investors should continue to live by the old mantra of Warren Buffet, which still holds true more so today than ever before: ‘Be fearful when others are greedy, and greedy when others are fearful.’

How Much Does it Really Cost to Build a New Condo?