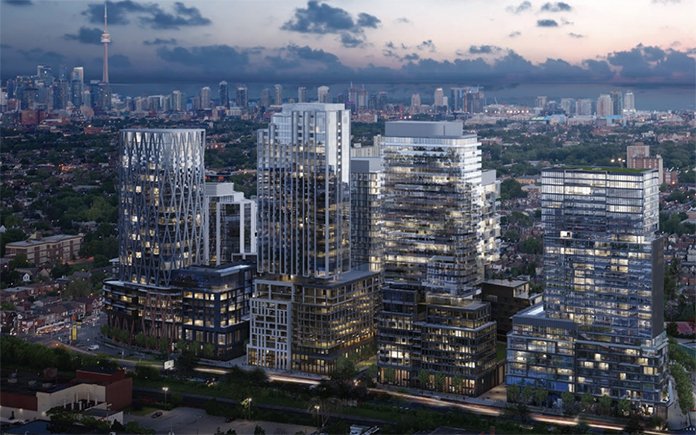 We’ve all heard the term “master-planned communities” in the pre-construction condo market, but what is it and why should investors care about these types of large-scale developments?

In a nutshell, master-planned communities within the condo segment are large-scale residential developments that introduce multiple condo towers on many acres of land that accommodate thousands of residents. They typically offer a large number of neighbourhood amenities from retail, commercial, parks, schools and community centres.

Master-planned communities have been around for quite some time, but are recently gaining more attention for the role they play in creating holistic communities that are now dominating the residential condo sector.

These multi-phased large-scale developments have generally outperformed individual condo developments across the City of Toronto in terms of both sales volume and appreciation rates.

In this case, we’re able to see how the Emerald City master-planned community performed over a 12-year time period against other stand alone condos within the entire C15 MLS district.

What we can see from the chart below is that Emerald City appreciated over 151% from 2008 to 2020, compared to only 126% for other individual towers within the same district. This price growth created a 25% higher return on investment for those who purchased within this master-planned community.

Similarly, in a third case study example of the Bayside Toronto master-planned community we see that average property values appreciated 110% in the C08 Toronto MLS District from 2013 to 2020, compared to only 76% for other single condo towers within the same region. This growth created a 34% higher return on investment for investors who bought at Bayside Toronto.

What we can see from the above sample cases is that master-planned communities tend to appreciate more than stand alone condos.

There are many reasons for this, but the result is mostly because master-planned communities give investors the opportunity to be surrounded by multi-million dollar infrastructure that helps increase their property values significantly more than general market conditions found in single condo towers.

But, there is more to the story about why master-planned communities appreciate higher.

Everyone’s heard the saying the “early bird catches the worm,” but what this means from a real estate perspective is that buying early on in any condo project presents the best investment opportunity.

Whether you’re buying one or two units, the point here is you want to purchase this investment not only with Platinum Access, but most importantly in its initial release phases.

If you look at average appreciation rates for any condo development across the GTA, you’ll notice that the initial phases of development give you the most competitive cost per square foot.

For example, historical condo market data gathered from Urbanation shows us that pre-construction condos had an average sold price per square foot of $478 in Q4 of 2010 compared to $938 in Q3 2020.

Now when you’re buying into a master-planned community this number is multiplying at a much higher rate. Investors know there are more towers coming in the future that will boost existing condo values, which is why it makes sense to buy early within any project release.

In addition, recent studies also show us that people actually prefer buying and living in neighbourhoods that are completely walkable and accessible.

According to a RE/MAX 2019 Liveability Report, six in 10 Canadians preferred to live within walking distance of green space, shopping and dining.

Proximity to work (30%) and schools (18%) also factored into Canadians’ choice of preferred communities.

And in another 2016 report by the Pembina Institute, data showed that more than 80% of GTA residents preferred to live in close proximity to transit accessible neighbourhoods. This is great news for investors because studies have also shown that Toronto properties close to public transit, particularly subway stations, appreciate up to 30% more than other buildings.

As a whole, this data matters because it tells us that master-planned communities have a significant advantage over single condo towers that cannot always build or plan around surrounding infrastructure, amenities and community services that people want.

Better Vision of the Future

Every investor wants a vision of the future.

There is nothing more frustrating than finding out years later that the condo asset you just purchased is going to be next door to a proposed nightclub, funeral home or in some cases become obstructed by another mega tower blocking your picturesque southern view.

Now, let’s be clear, this doesn’t happen all the time, but when it does it can really put a downer on your investment.

Developers of master-planned communities are not just there to build one tower and move on. These developers are going to be around for at least 15 to 20 years making sure their projects are well designed and creating a return on investment for their stakeholders from the beginning to end phases of construction.

Basically, developers of these large-scale projects care about what’s coming in the area because they have more control over neighbouring developments than those who only build one tower. They’re highly vested in the entire project to make sure it grows, prospers and achieves the complete vision it sought out from the very beginning.

Having a vision of the future also means understanding what potential future condo towers, schools, plazas or any neighbourhood facilities are going to be developed nearby.

Because most master-planned communities are built in phases, investors will know ahead of time what future infrastructure and developments are coming.

As an investor, you need to analyze this data in order to make your own determination about which investment is best for you and your current situation. But, for the long term investor, there couldn’t be a better choice than a master-planned community where a vision for growth is foreseeable.