The government of Ontario is one step closer to delivering on its plan for more rapid, reliable and connected transportation in the GTA. Late last month, York Region and the province signed the Ontario-York Region Transit Partnership Preliminary Agreement for a six-stop subway extension from Finch Avenue to Highway 7.

This landmark extension is estimated to cost around $5.6 billion and will be the largest subway expansion in Canadian History. From start to finish, the entire project will be the responsibility of the province and will be overseen by Metrolinx with a completion date of 2030.

Currently, there are four major infrastructure projects underway in the GTA; the Ontario Line, three-stop Scarborough subway extension and the Eglinton Crosstown West Extension to Pearson Airport. The fourth and latest project is the Yonge North Subway Extension (YSNE) to Richmond Hill and Markham.

This critical rapid transit link will include up to 6 stations at Cummer/Drewry, Steeles, Clark, Royal Orchard (to be confirmed with preliminary engineering), Langstaff/Longbridge and Richmond Hill Centre. Intermodal terminals will be located at Steeles Station and Richmond Hill Centre Station, and 2,000 commuter parking spaces will be near Langstaff/Longbridge Station. 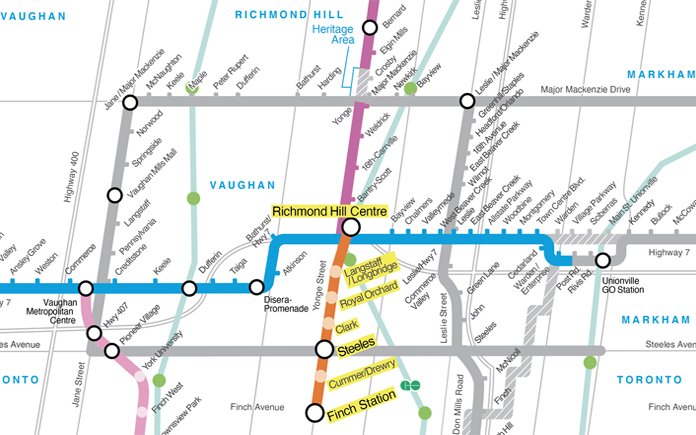 The Yonge North Subway Extension will support the Greater Toronto Area's top two employment hubs-- Vaughan/Markham and Toronto, where housing demand and jobs continue to grow at a rate far surpassing other regions in the GTHA. Large subway projects like this one can take upwards of 10 years to build, so this first step is vital in creating sustainable communities and fantastic places to invest in for the future.

Take the Richmond Hill/Langstaff Urban Growth Centre at Highway 7 and Yonge Street for instance-- this area is estimated to see 88,000 new residents and 60,000 new jobs over the next decade. Not to mention, the urbanization occurring along the 5 other proposed subway stops where the province's smart growth objective of transportation, employment and well-needed housing is already in progress.

Today, the Yonge Subway line (TTC's Line 1) is operating over capacity during its peak hours. In order for the Growth Plan for the Greater Golden Horseshoe to hit York Region's growth target of 1.5 million people by 2031, infrastructure like transportation technology is being put in place to build sustainably for future generations.

While York Region's economic centres are smaller than Toronto, they are thriving, dynamic districts and they are receiving a lot of attention from real estate investors-- especially since 2017's Yonge/University & Toronto/York Spadina Subway Line expansion into the Vaughan Area.

Since the opening of Vaughan's first subway stations, the Vaughan Metropolitan Centre (VMC) has become one of Canada's fastest-growing metropolises, and it has been very fruitful in attracting new businesses in addition to creating opportunities for existing trades to expand.

The VMC is also experiencing a real estate boom as newly proposed master-planned high-rise landmark communities are being developed and built. Local and international investors are rushing to take advantage of the area's average condo price of $407,400 (in 2019), and it's idyllic location next to the subway, employment hubs, shops, and York University. It's only a matter of time before the Richmond Hill/Langstaff Urban Growth Centre on the upcoming Yonge North Subway Extension sees a similar fate.

It's no secret that where the TTC goes up, so does property value and so in consequence, properties close to the subway are always going to be a little more expensive. A recent study found that properties located near a subway station were 30% more expensive. Still, the VMC's average condo price ($407,400 in 2019) is far lower than the average cost of a condo anywhere near a subway station in the City of Toronto.

If Vaughan's city centre is any indication of what's to come for projects in the pipeline along the new Yonge North Subway Extension, there will be a number of attractive pre-construction real estate opportunities for both home buyers and investors. And if you're looking to get ahead of the rush that will inevitably ensue for properties in the area, connect with us here to learn about new and upcoming projects between Finch Avenue and Highway 7.

Why Are Canadians More Confident in the Housing Market Than the Economy?