A beautiful community of upscale townhomes will elevate this blossoming Richmond Hill neighbourhood.

This development will consist of nine boutique townhome blocks that will offer three bedrooms and sizes ranging from 2,305 - 2,970 square-feet. There will also be additional square-footage for rooftop terraces, balconies and a yard. These upscale homes will elevate this suburban community with their modern and suave aesthetic. 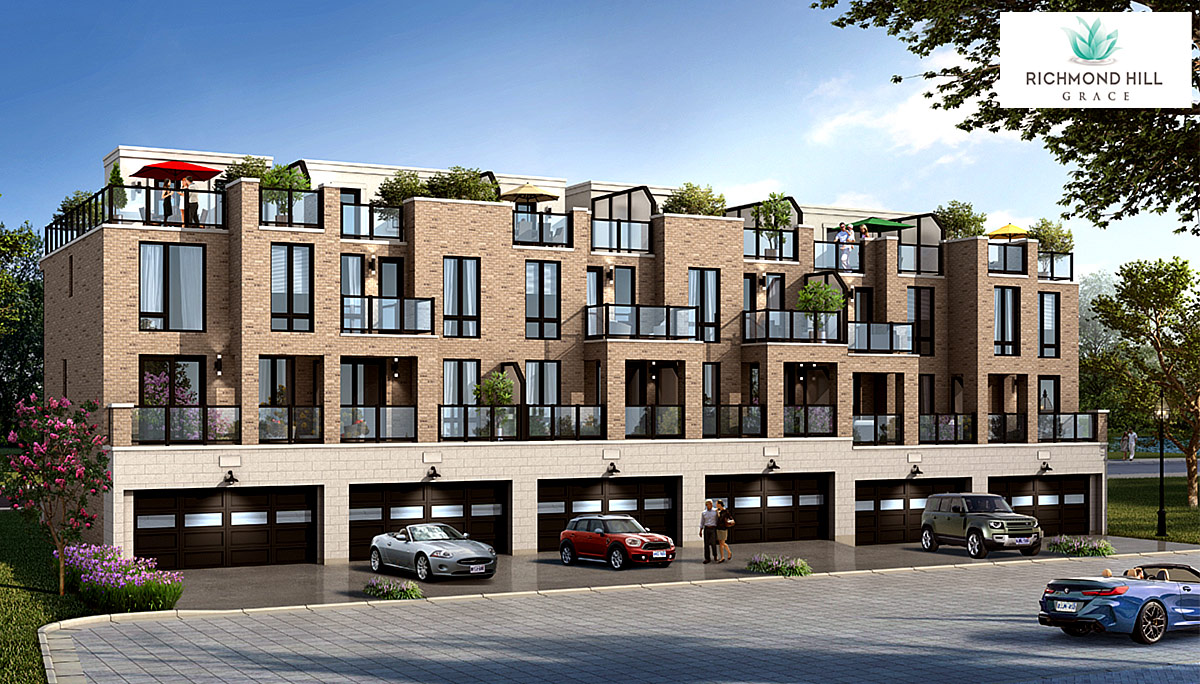 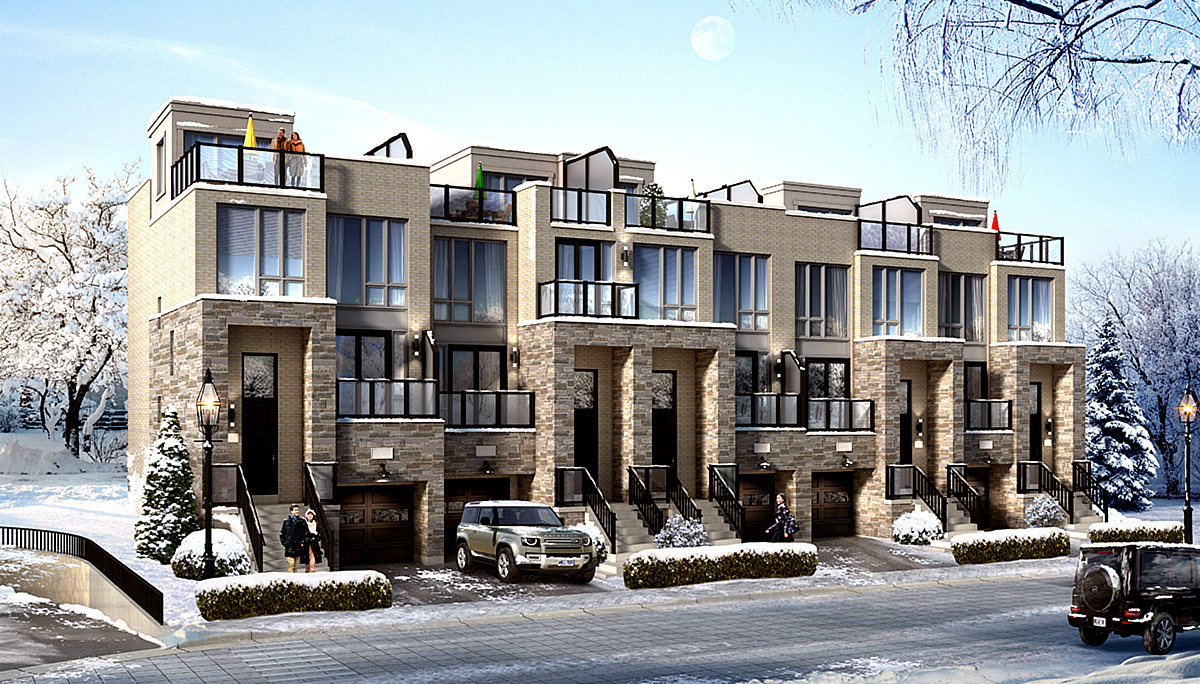 Richmond Hill Grace Towns is a meticulously designed community that will offer many features and amenities to its residents. The development will be broken up into nine blocks including front-load towns, rear-lane towns, back-to-back and urban towns. There will be three bedrooms in each home with an option to turn an additional room into a fourth bedroom. The sizes will range from 2,305 to 2,970 square-feet plus over 700 square-feet for a rooftop terrace and balcony and over 500 square-feet for the yard.

The luxury homes will feature exceptional amenities from large bedrooms to sunlit open-space living areas, to home offices and homework nooks. Kitchens will be available in open-concept layouts as well as other rooms in the dwellings to maximize comfortability, breathability and livability. Windows will also be large in size to allow maximal natural light in. 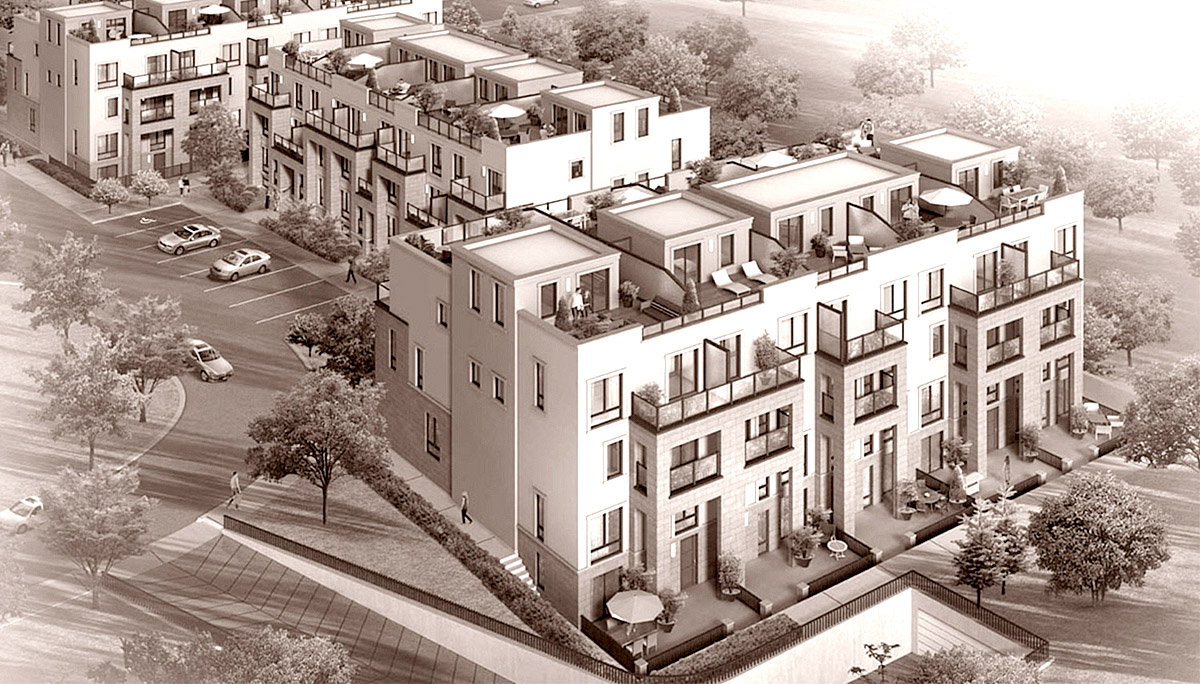 The master ensuite will have a stand up shower feature with glass enclosure, deep soaker tub/shower in main bathroom, elegant vanity cabinetry with flat slab doors in all bathrooms and exquisite Caesarstone countertops. There will also be natural gas BBQ lines and water/drain to rooftop terrace or backyard, state-of-the-art home comfort systems and superior grade construction. Enhanced lifestyle upgrade packages are also available.

These capacious homes will have elegant architectural exteriors to elevate the appearance of the adjacent neighbourhoods. They will feature cream and light grey coloured brick, with black steel framed windows. The homes will also have lush lawn space available for its residents.

Richmond Hill Grace Towns will sit in a quiet, family-friendly neighbourhood right at Yonge Street & Jefferson Side Road in Richmond Hill. This location has the luxury of suburban amenities with the convenience of rural amenities in close proximity.

This evolving community already has so much to offer families, from lush green amenities to parks, school and retail shopping all just minutes away. It’s hard not to fall in love with these homes and their prime Richmond Hill location.

As the family-oriented community it is, you can find numerous highly-ranked public and private elementary and secondary schools; as well as an abundance in scenic bicycling and hiking trails just minutes from this site. Moraine Park, William Bond Park and Ozark Park are connected by pathways and trails that lead to the Oak Ridges Corridor Conservation Reserve, an important link to the Oak Ridges Moraine. Feel free to explore this 175-plus hectare oasis by walking, running, or biking.

This site has the advantage of being just minutes from Highway 404, with easy access to the 407, and the Gardiner Expressway, allowing travellers to get to Downtown Toronto in as little as 35 minutes. Richmond Hill has extensive bus services throughout this city. There are five major modes of public transit accessible to its residents and visitors, such as VIVANext (Yonge St. Rapidway), Yonge St Subway Extension EA, GO Transit, 407 Transitway (MTO) and VIA Rail (Ontario Northland). Not to mention, Gormley GO station, and York Region Transit routes are just minutes away. Residents will also benefit from the anticipated Yonge Subway Extension set to finish by 2030.

This site is also strategically located near a multitude of shopping conveniences. In under five minutes you will have access to several grocery stores, a Starbucks, a Beer Store, a Shoppers Drug Mart and an array of dining experiences. Additionally, big names such as Costco, The Home Depot, Staples and so much more or all in the close vicinity.

Richmond Hill is currently Canada's hottest real estate housing market, as they're leading the way in an increased demand for suburban areas outside downtown Toronto. We highly recommend investors and opportunists jump at this secure investment opportunity.

Information on this development company will be available soon. 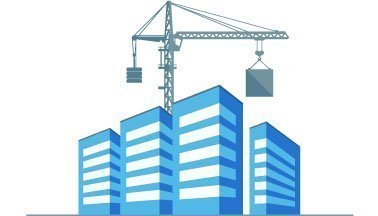