Be part of a game-changing redevelopment at 1380 Midland Avenue in the leafy, east-end suburb in the Dorset Park neighbourhood of Scarborough.

This Scarborough condo community will span four blocks at the corner of Lawrence Avenue East and Midland, and will include nine buildings ranging in height from eight to 27 storeys, plus a row of three-storey townhomes.

When you invest in real estate at this site, you’re investing in a home, a community and beyond.

Occupancy for 1380 Midland Avenue Condos is scheduled for 2021. 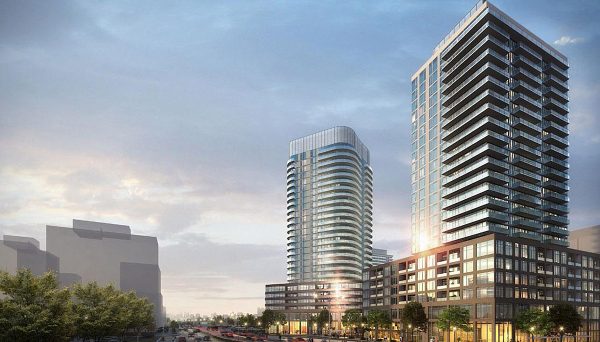 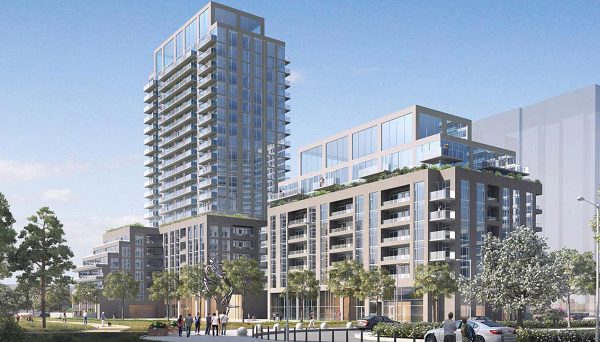 1380 Midland Avenue Condos, which is being overseen by developers Arsandco, includes four separate blocks at the southwest corner of Lawrence Avenue East and Midland Avenue, a bustling intersection close to schools, hospitals and major transit. The development proposal calls for 9 buildings in total, ranging in height from eight to 27 storeys. This will make for 1,752 residential units, with some office and retail space, forming a community unto itself.

On the west side, fronting Midland Avenue, the application calls for a 25-storey building and a 23-storey building, housing retail, office and residential units.

Just south of that will be another residential building, standing 21 floors.

Shared underground parking will have space for 1,779 vehicles and 1,527 bicycles.

Building renderings by the site’s architects, Quadrangle, show a mixture of glass towers and rooftop gardens with a leafy promenade dividing the blocks.

Scarborough is a great place to invest in Toronto real estate right now. It’s slightly east of the city, so homes tend to be more spacious and sell for less than they would closer to downtown Toronto. But Transit City’s plan to extend the subway line into the area will significantly increase the value of homes, encourage more people to invest in the area and allow residents to commute efficiently.

As it stands, the project site is close to the Lawrence East Station on the Scarborough LRT line, major highways, hospitals, Scarborough Town Centre and the University of Toronto’s Scarborough campus. Community and recreation centres are nearby as well, including the renowned Scarborough Golf and Country Club.

The City of Toronto has designed 1380 Midland Ave as an “Avenue,” in the city’s urban structural plan. Areas with avenue designations are sections of the city where reurbanization is anticipated and encouraged, so that housing and job opportunities are created and the streetscape is pedestrian-friendly. There’s never been a better time to invest in Scarborough real estate, and this master-planned community is a great place to start.