Live the ideal contemporary urban lifestyle. Enjoy downtown at its finest. Feel the pulse of the city at its heart. And now, you can do it all, here at this magnificent residential sky-rise. 1075 Bay Street is a pre-construction condominium and office high-rise development in downtown Toronto.

With 528 suites currently planned for construction, this real estate property represents the pinnacle of luxury living. Equipped with stunning panoramic views of the surrounding urban vista, this towering condo will be equipped with substantial indoor and outdoor amenities that provide residents with lavish services and facilities. And, due to its central location, reaching any location within downtown area is only moments away. 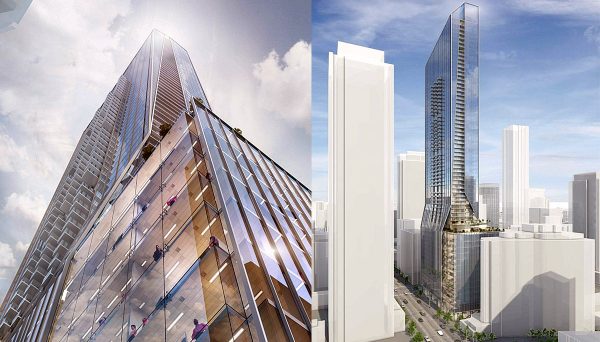 As the epitome of downtown living, 1075 Bay Street condo project is ideal for its centralized address and sumptuous facilities. And yet, this new development entails a positive change not just for residents, but for everyone.

This major step forward for the city centre seeks to fulfill a number of issues that have plagued this densely-populated area. Designed to occupy the first 14 floors of the building, the newly-constructed office space will actually improve on existing facilities (24,460 square meters compared to the current building’s 19,230 square meters). And, by intensifying development at its core, this new mixed-use facility will help alleviate the strain on transportation networks by accommodating the needs of the local community instead of having residents rely upon their cars.

Any way you look at it, this splendid future development and its breathtaking views aren’t anything to be ever be seen in a bad light. To that end, real estate investors should be able to see from miles away that this opportunity won’t be available for long.

Live at the peak of chic, the apex of affluence. Choose 1075 Bay Street, and adopt a downtown lifestyle as your very own. 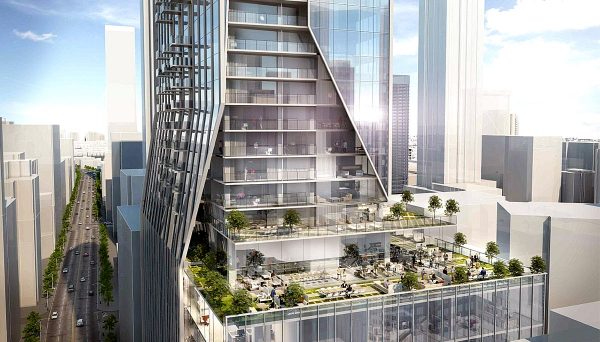 As an exquisite depiction of resplendent aesthetics, this building will become known for its intricate glass exterior as well as its upscale and ornate interiors.

With floors 2 through 14 reserved for office use, a full 62 percent of this building will be reserved for condominiums and their amenities, taking the form of immaculately-designed facilities and forward-thinking design.

Living units belonging to this opulent condominium are planned to occupy floors 16 through 65 at an average of 11 units per floor. The condo is set to build 313 1-bedroom units, 147 2-bedroom units, and 68 3-bedroom units, each of which will have an average size of 53, 76, and 91 square meters, respectively. Select units will be equipped with a balcony that emerge from a glass curtain wall and rise to the 50th floor.

The deluxe approach given to individual units will extend to all amenities. Condo residents will be greeted upon their return home by an exclusive residential lobby equipped with concierge, lounge as well as mailroom and parcel pick-up.

As its crowning jewel, this building’s most impressive amenity can be found on the 66th floor where residents have access to 500 square metre indoor room that provides incredible 360 degree panoramic views of the city.

The building’s parking needs will be served by a six-level underground parking garage that will contain 201 parking spaces, 106 of which are reserved for residents. Additionally, the building will provide 639 spots for bicycle parking that will include two shower/change facilities for commuting cyclists.

To top it off, this building will allocate 835 square meters of ground-level space for retail and commercial purposes. And, considering that plans call for Bay Street sidewalks to be set back 6 meters, this future space can accommodate a restaurant that features patio seating.

As impressive as they are, these phenomenal facilities only represent a part of the benefits that come with living at this address. That’s because here, at this central location, residents can live the ideal downtown lifestyle that they’ve always wanted.

It doesn’t get anymore downtown than at 1075 Bay Street, a premium location that lies at the heart of Toronto.

The total accessibility offered at this location is demonstrated by its sky-high Walk Score of 99, signifying that daily errands do not require a car. Instead, residents can live at the “speed of life” within downtown limits where everything lies within easy reach.

On nearby Yonge Street and Bloor Street and everywhere else, residents can find everything they need at nearby stores, banks, pharmacies, theatres, and bars. The St. George campus of the University of Toronto lies just 5 minutes away by foot, while the shops of Holt Renfrew Centre can be reached in just 4 minutes. World-class shopping and dining is just a 13 minute walk away at Yorkville, while Yonge-Dundas Square and the CF Toronto Eaton Centre lies just 11 minutes away.

Downtown is also not without its fair share of greenspace to provide a reprieve from the concrete landscape. Nearby parks include George Hislop Park, Norman Jewison Park, James Canning Gardens, and Barbara Hall Park. As well, residents are within an easy walk of Toronto’s pre-eminent public floral area, Allen Gardens, as well as very close to a meditative stroll along Philosopher’s Walk on the University of Toronto campus.

But where a short walk won’t suffice, Toronto’s public transportation system will provide. And, due to this condo’s excellent location, residents have access to nothing short of world-class service as designated by a top-notch Transit Score of 99.

This pre-construction condo is located within 600 metres of no less than four TTC subway stations on the city’s two subway lines (Yonge/Bloor, Wellesley, Bay, and Museum) as well as bus stops serving four surface bus routes (6 Bay, 97 Yonge, 94 Wellesley, and 5 Avenue). Not only that, the Greyhound Canada Transportation Centre is located just 12 minutes away by foot, providing Greyhound bus service to southern Ontario and parts of the US. As well, getting to Pearson International Airport only takes 45 minutes using the new UP Express train.

From the standpoint of luxury accommodations and centralised location, there is nothing more ideal than the condos at 1075 Bay Street, an address that will bring widespread benefit to its residents and the community at large. The only choice left to make for interested investors is whether they want to part of this unique chapter of history in the making.

Canderel is an award-winning home developer who has built over 75,000 homes, all to the great satisfaction of their clients. Imbued with two decades of seasoned experience, Canderel is responsible for building such great developments across Canada and the USA like the Tours des Canadiens in Montreal and DNA 3 in Toronto’s King Street West.