This Toronto condominium is an eagerly-anticipated addition to the community and will feature two towers with 387 units, plus 43 spacious townhomes. Dimensions range from 437 square feet to 1,823 with a wide selection of layouts, from one to three bedrooms. 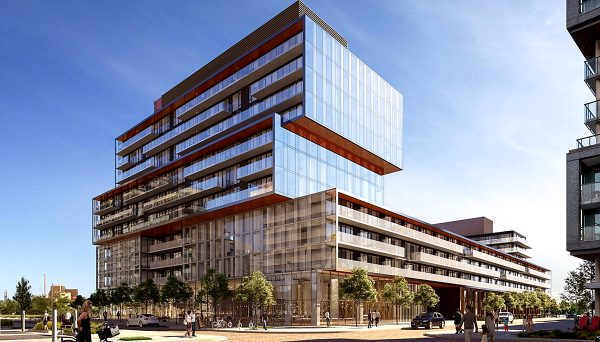 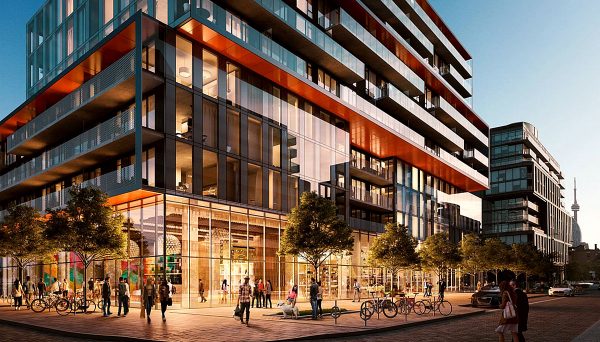 The development has been designed with thoughtful amenities in mind, including a state-of-the-art fitness zone, yoga studio, a party room with private dining alcove and a kids' playroom. The modern entrepreneur will appreciate a fully-equipped co-working space, perfect for the freelancer, student or professional who works from home.

Enjoy 9,000 square-feet of outdoor space, including a rooftop terrace with barbecues and an outdoor theatre. while a designer-furnished lobby and 24/hour concierge will greet you and your guests.

This is an opportunity be part of an award-winning, 35-acre master-planned community canary district, home to a vibrant pedestrian promenade, boutiques, cafes and parkland. It also features a dedicated streetcar route and a brand-new YMCA. Living here means having access to not only some of the city’s newest infrastructure and community resources, but being part of a walkable, vibrant and family-friendly pocket.

West Don Lands condominiums present a unique opportunity to live in a rapidly-transforming part of Toronto. Home to two master-planned communities, along with several condominium developments in other parts of the neighbourhood, it’s an area gaining popularity with professionals, young families and downsizers alike.

Sitting just east of the downtown core, bordered by the harbour to the south and the Don River to the east, it’s a dynamic pocket with something for everyone. Lush parkland and the Lower Don River trail make it attractive to recreation lovers, while easy access to shopping and dining on the trendy King Street east allows urban enthusiasts to feel equally at home.

The West Don lands is served well by transit, including easy access to two streetcar lines, one of which connects directly with downtown’s Union Station. In fact, the tower site scores an almost perfect 95/100 on its Transit Score and a 90/100 on its Walk Score. For the professional, it’s about a ten-minute ride into the Financial District and everything the downtown core has to offer. Driving? The Don Valley Parkway and Gardiner Expressway border the neighbourhood, making it a great spot for those who have longer commutes too.

Its central location makes for easy access to some of the city’s best neighbourhoods, including The Distillery District, St. Lawrence Market, Leslieville and The Beaches.

A new development just to the west will add new campuses for both George Brown College and OCAD University, as well as significant office and creative studio space.

Kilmer Group has received numerous accolades for their projects, including 2014’s Community of the Year, awarded by BILD, for the Canary District. They maintain several investment partnerships in the infrastructure, real estate, athletic and media industries.