Resort-style amenities, contemporary architecture and the cosmopolitan vibe of Yonge and Eglinton come together in this Toronto condominium project by Pemberton Group.  Citylights On Broadway Condos is scheduled to welcome residents in 2019, this is the much-anticipated development. High above the vibrant city centre in your luxury suite, discover all the benefits of embracing the new midtown.

This project sits at 99 Broadway Avenue, a leafy sidestreet just north of the Yonge Street and Eglinton Avenue hub. Pemberton’s proposal consists of a five-storey podium anchoring two soaring glass towers, each reaching 37 storeys. With clean slender lines and expansive glass, Citylights on Broadway is a modern beacon, welcoming some of midtown’s most impressive skyline views.

There will be 496 suites in total, consisting of a mix of one, one-plus-den and two-bedroom floorplans. Dimensions range from approximately 500 square feet to approximately 700. 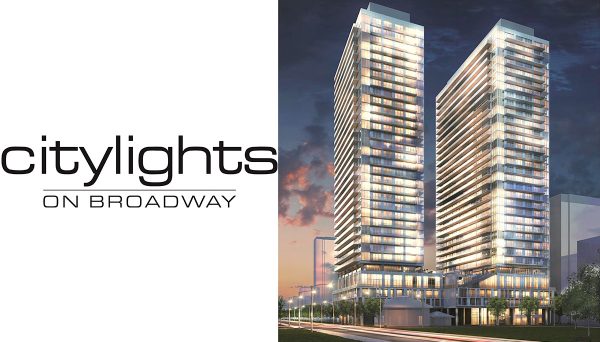 Design selections are professionally curated and come in a variety of options, so your home can reflect your unique style and living requirements. Choose from a selection of contemporary laminate flooring throughout your unit, paired with a kitchen featuring European-style appliances, a modern undermount sink and your choice of cabinet finishes and backsplash. Let your new bathroom be an oasis with your choice of porcelain tiles for floors and shower enclosures and your choice of countertops, cabinetry and vanity style. Indulge in a spacious soaker tub. Features and finishes here have been designed to please even the most discerning homebuyer.

At CityLights on Broadway, you’ll gain exclusive access to almost 30,000 square feet of indoor and outdoor amenities at the Broadway Club. Indoors, a spacious party lounge with a wet bar is a great place to kick off your evening or throw a five-star event. Or, host a more intimate gathering in the formal dining room, which includes a chef’s kitchen. An abundance of lounge spaces and meeting rooms means whether you’re closing the deal or catching up on gossip, you can do it in stylish and functional surroundings.

Feel energized in the state-of-the-art fitness studio, a space that makes it easy for you to achieve optimum health and wellness. The studio is equipped for yoga, pilates, cardio, spinning and strength training, and even features badminton and basketball courts. Afterwards, relax and recharge in the onsite juice bar.

But it’s the rooftop resort that really takes these amenities to the next level. Up here, you’re greeted by sweeping views of the lush midtown ravines and in the distance, the city skyline. The rooftop features two pools and a waterfall, along with barbecue stations and an outdoor lounge with a fire pit. It’s a fabulous hideaway, where you can lounge poolside, grill your favourite dishes, have a tranquil start to your morning with some laps in the crystal waters, or just relax and take in the views. What could be better?

Yonge and Eglinton has a sophisticated urban energy, comparable to many downtown neighbourhoods. It’s an area that has grown exponentially over the past five years and continues to do so, with the city of Toronto naming it the second fastest growing employment center in Toronto. It’s estimated that there are almost 20,000 office jobs in the area, with 28 percent of those having been created in the past five years. A multi-million dollar commercial and retail upgrade taking place at the northwest corner of Yonge and Eglinton will likely encourage this trend.

Another factor contributing to the area as an urban growth centre is the future Eglinton Crosstown LRT, which is scheduled to be up and running in 2020. With its completion, this major metropolitan hub will become one of the city's only intersections to provide subway access in all four directions. Studies show that the modern young professional renter prefers to live in close proximity to transit, making condominiums in this area a great investment. From the current Eglinton Station, it’s only a fifteen-minute ride into the heart of downtown.

Aside from its growing reputation as a retail and commercial hub, the streets here are lined with boutique services, indie labels, trendy coffee shops and every kind of eatery you could imagine. Whether you’re on the lookout for an upscale wine bar for date night, the newest hotspot for brunch or a cozy corner to kick back with some comfort food and craft beer, you’ll find it near Yonge and Eglinton.

Pemberton Group has been steadily growing their development portfolio, having been quite prolific over the past ten years. Their work includes single family homes, urban townhouse collections and a selection of modern condominium communities, in some of the GTA’s most sought-after areas. They pride themselves on quality craftsmanship, covetable design and an intuitive sense for the next up-and-coming hotspots throughout the Greater Toronto Area.