Just steps from the subway station, the development is right at the centre of transit, a leafy ravine and all the upscale amenities that the Deer Park neighbourhood has to offer.

The Clair Residences is a pre-construction condominium development by Great Gulf in Midtown Toronto. This new project is located at 1421 Yonge street Street and has an occupancy date of February 2023.

This new condo project, which is still in the negotiation phase with the city of Toronto, calls for a proposal to build a 34-storey condominium tower at the site. This would give residents a dazzling, unobstructed view of both the city skyline and the Rosehill Reservoir. The application proposes 164 residential units in the tower, with retail space on the ground floor, to complement the urban streetscape of Yonge. It’s proposed that the tower contains 65 percent one-bedroom units and 35 two-bedroom units.

The application also asks for four levels of underground parking with space for both vehicles and bicycles. Architectural renderings show a sparkling glass tower with a green roof and an expansive communal terrace.

Details about the site plan will be finalized by the city later this year and occupancy for this midtown Toronto condo is tentatively scheduled for 2023.

Wallman Architects is handling the project’s design, a firm that has developed large-scale condo and hotel developments throughout downtown Toronto and Yorkville. Their projects typically feature symmetrical designs with expansive glass frontage. Midtown is an excellent place to invest in or call home – or both. Many people appreciate the vibrant urban lifestyle, yet close proximity to ravines and green space, like the Rosehill Reservoir and the Beltline trail, a 10-kilometre, leafy walking and cycling trail that winds through some of Toronto’s most upscale neighbourhoods like Forest Hill and Chaplin Estates.

Historically favoured by affluent families and mature couples, Deer Park’s easy access to the University of Toronto and Ryerson University attracts students and young professionals as well, which has contributed to a youthful rejuvenation. Schools, libraries and community centres are all within walking distance. It scores a 94 on its Walk Score and a 87 on its Transit Score.

The Yonge and Eglinton area, just two subway stops north, has been named an “urban growth area” by the province, with world-class dining, shopping and an increased potential for population and job growth.

Portions of the Yonge and St. Clair neighbourhood still retain a touch of the area’s history; the grounds of Casa Loma, Toronto’s majestic castle and gardens. The area is still dotted with Gothic Revival-style apartment buildings, and Yonge Street is lined with heritage walk-up apartments perched atop upscale shops and boutiques. All this and you’re a five-minute subway ride from the heart of downtown Toronto.

The Great Gulf is a real estate development and management company with both residential and commercial projects throughout Canada and the United States. They’re behind several high-rise developments in the midtown, Toronto area. 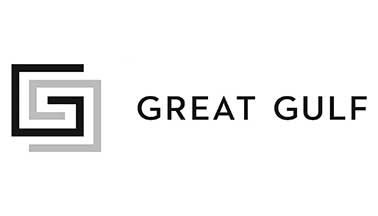