Give yourself the ideal urban lifestyle with this new luxury residence set to redefine the skyline of downtown Toronto.

This new project made by RioCan Living is currently in pre-construction located at 126 John Street at the intersection of Richmond Street West. RioCan Hall Redevelopment is a mixed-use development in Toronto’s Entertainment District.

As an ambitious reimagining of the current RioCan Hall, this resplendent redevelopment looks to become the preeminent condominium of the city centre. Designed to be a model of forward-thinking design and urban practicality, this new complex will serve no end of convenience and comfort to its residents and the public at large.

This complex will largely be comprised of two condominium towers, each 39 and 40-storeys high, that will contain a total of 613 living units as well as devoting seven floors to office space. The towers will share an articulated 7-storey podium that will used for such varied purposes as a daycare, a grocery store, and an eight-auditorium theatre complex, thereby attracting a wider clientele to what will surely be a bustling central destination.

Not only that, this eye-catching project looks to continue this site’s storied legacy as a prominent downtown destination. The northwest corner of this redevelopment will feature a publicly accessible 744 square metre park, sure to become a future meeting place and neighbourhood focal point. The project also looks to improve the public realm with ground floor setbacks that will allow for wider sidewalks, street-level trees, and bicycle parking. At the same time, the redevelopment will arrange for ground-level retail and restaurant space in order to cater to John Street’s ongoing function as a pedestrian-oriented avenue.

For the benefits this new project will give to the surrounding area, it’s the future residents of this high-end condo that stand to benefit the most from the unbeatable location of this address. Here, in the Entertainment District at the centre of downtown, residents have immediate access to the city’s best entertainment, retail, and food and beverage establishments while simultaneously receiving world-class transit service.

This exciting project signifies the very epitome of urban living — it simply doesn’t get more downtown than with RioCan Hall Redevelopment, an unmatched choice when it comes to Toronto condo investment. 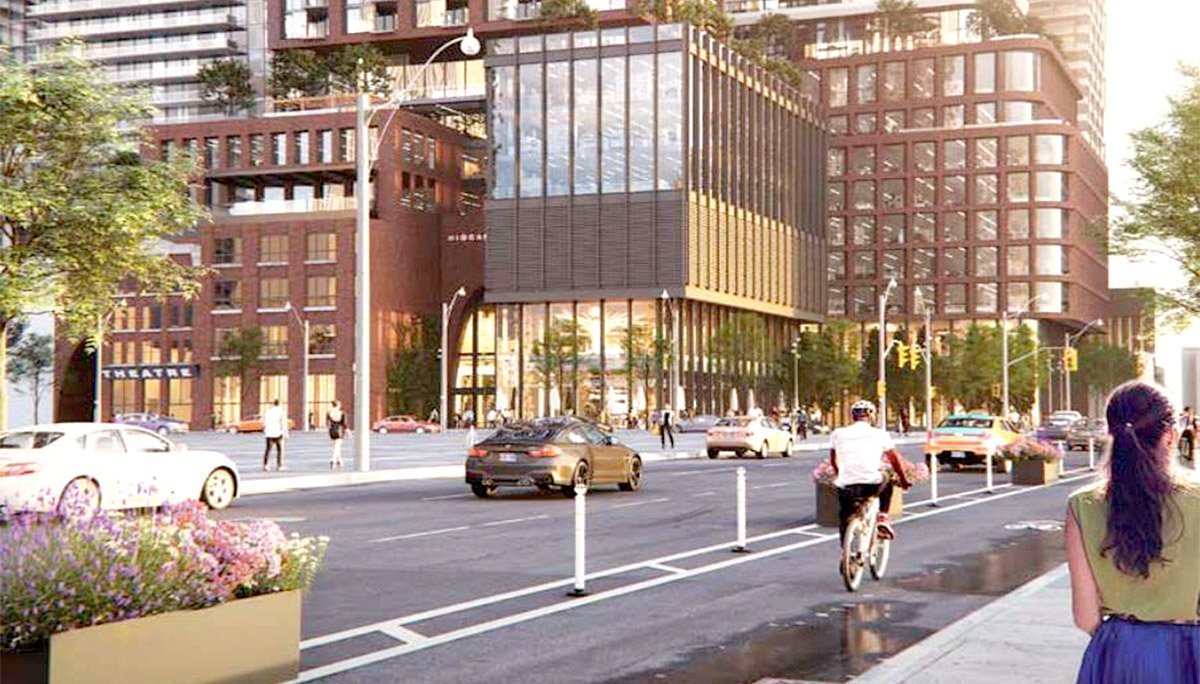 This upscale development will consist of:

1-bedroom units will make up three-fifths of all condo living spaces. As seen by architectural plans, one of the towers will feature rounded corners and setbacks on several floors, creating spacious outdoor terraces for select units. 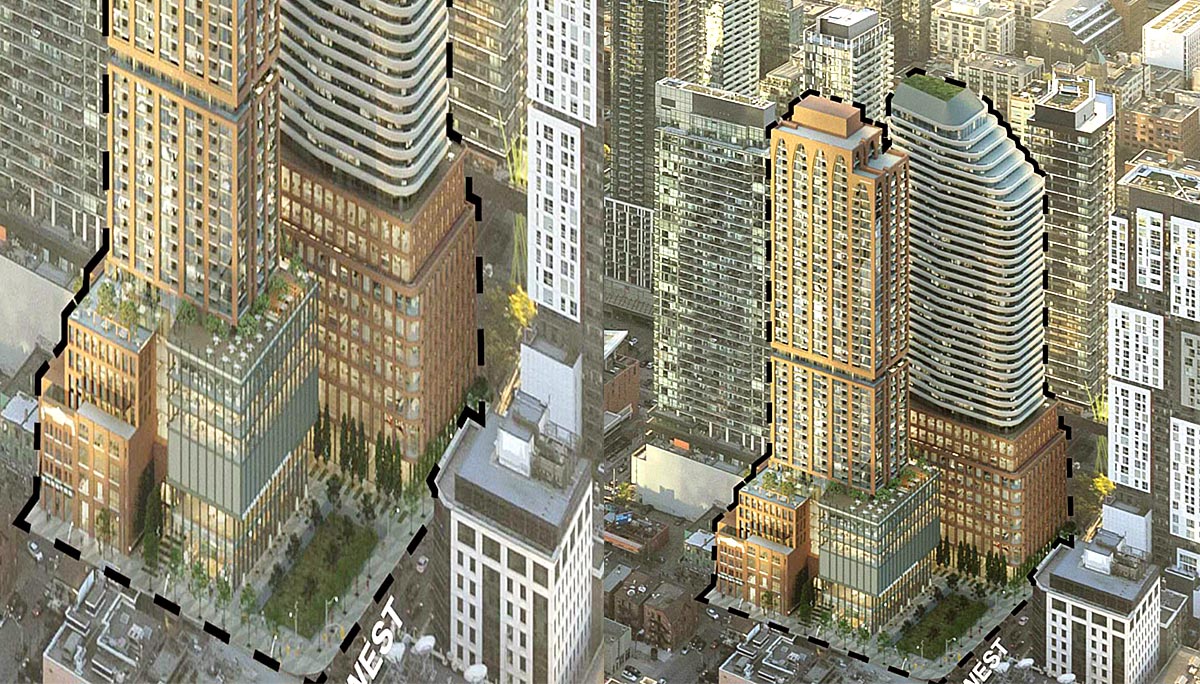 Residences of each tower will be serviced by its own separate lobby, as will the site’s office space. The first and second floor retail space is expected to take up 5,953 and 5,993 square metres, respectively, while the third-floor three-storey-high theatre will occupy upwards of 6,377 square metres of space. Meanwhile, these services will be rounded out by a 1,335-square-metre daycare that will come equipped with its own outdoor rooftop play area.

Be sure to register with GTA-Homes today to receive all the latest updates on this rising real estate prospect. 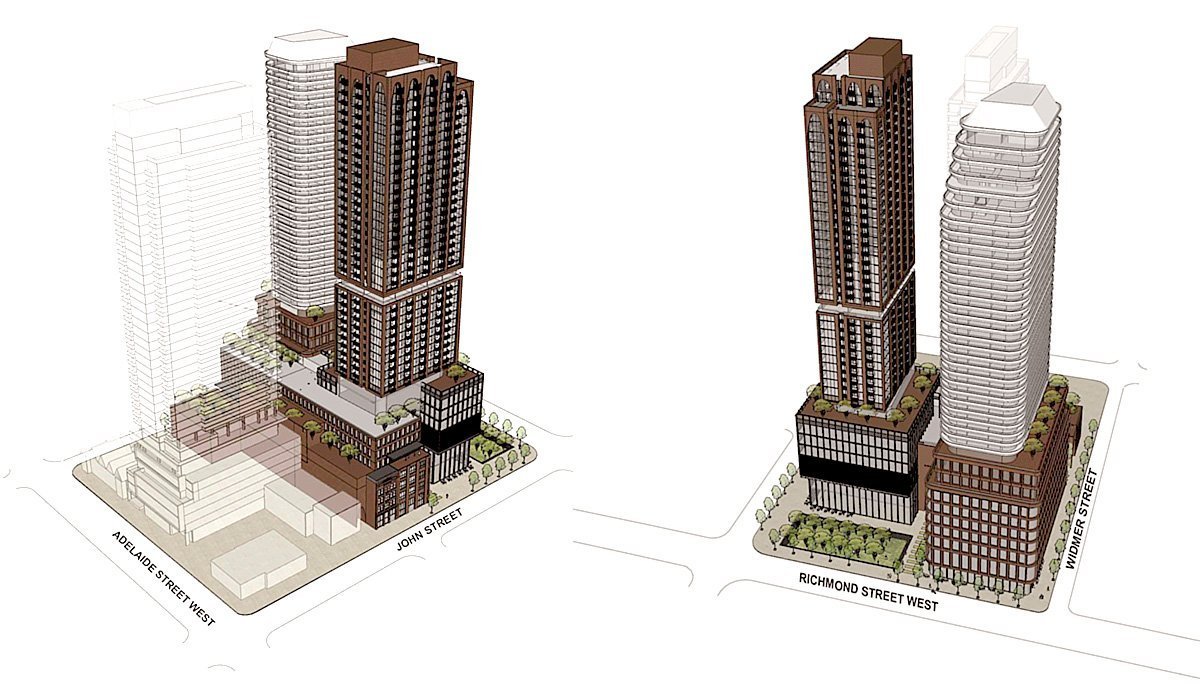 With the entire downtown core waiting outside the door of this address, it’s no mistake to say this redevelopment is located in the absolute heart of Toronto. This condo has been awarded a sublime Walk Score of 99, signifying a Walker’s Paradise where daily errands do not require a car.

From the condo’s location at Richmond and John, there is just about no shortage of top attractions, choice eateries and retail outlets, and esteemed cultural hotspots.

World-class theatres and museums in the vicinity include the Princess of Wales Theatre, the Royal Alexandra Theatre, Roy Thomson Hall, Art Gallery of Ontario, and TIFF Bell Lightbox. Nearby popular tourist attractions include the CN Tower, Harbourfront, Ripley’s Aquarium of Canada, and the Hockey Hall of Fame while large-scale sporting and entertainment venues Rogers Centre and Scotiabank Arena are both located a short walk away as are City Hall and its venerable neighbour, CF Eaton Centre.

Not only that, this area is home to such essential municipal services such as Toronto Western Hospital, Toronto General Hospital, and the Hospital for Sick Children. Additionally, residents will be able to make quick commutes to the University of Toronto and Ryerson University, making this condo into a great off-campus residence.

And, to ensure this surplus of concrete isn’t without its complementary nature counterpart, nearby parks found in the vicinity include Grange Park, Saint Patrick’s Square, David Pecaut Square, Isabella Valancy Crawford Park as well as Clarence Square Park and its accompanying dog park.

All the same, the convenience of downtown isn’t limited to just neighbouring amenities. This condo location has been awarded an unassailable Transit Score of 100 that signifies this area as having world-class public transportation.

In just 6 minutes by foot, local residents are able to access the TTC subway system at Osgoode Station. At the same time, the central transportation hub of Union Station is just 15 minutes away, allowing commuters to reach Pearson International Airport in under 50 minutes, among other destinations. And, if that wasn’t enough, residents can get around using any one of the surrounding downtown streetcar routes that include Queen, King, and Spadina.

For the very best in downtown living, make your next home at RioCan Hall Redevelopment, the city’s next great condominium.

As the largest Real Estate Investment Trust in Canada since 1993, RioCan Living has become a well-trusted name in the national commercial development industry. With retail revitalizations located throughout Toronto for top companies such as Loblaws, Indigo and Shoppers Drug Mart, RioCan Living  has expanded into the booming condominium industry with several recent mixed-use developments.