This is a unique loft conversion that is coming soon to the old Weston Bakery.

Wonder Condos is a new condo by Graywood Developments and Alterra in Toronto’s Leslieville neighbourhood. This new pre-construction project is located at the north side of Eastern Avenue, between Logan and Booth Avenues. The occupancy date is tentatively set for 2022.

Leslieville is one of the city’s most cherished neighbourhoods, the waterfront and a wealth of local eating and shopping options. Popular with families and professionals alike, it’s been called the “brunch capital” of Toronto.

The development proposes the adaptive re-use of the existing Weston Bakery, a historic building that is no longer active. Featuring a combination of one-of-a-kind lofts, chic condos, and towns, it will be a project that complements the surrounding district while setting the standard for new developments in the area. 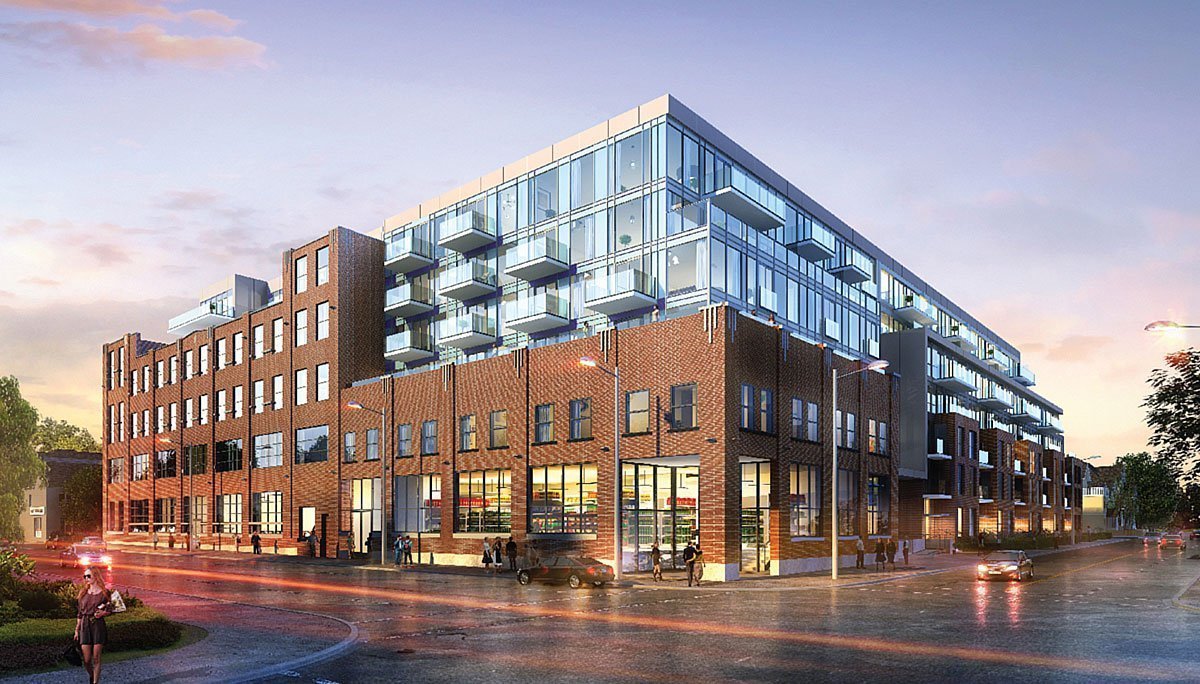 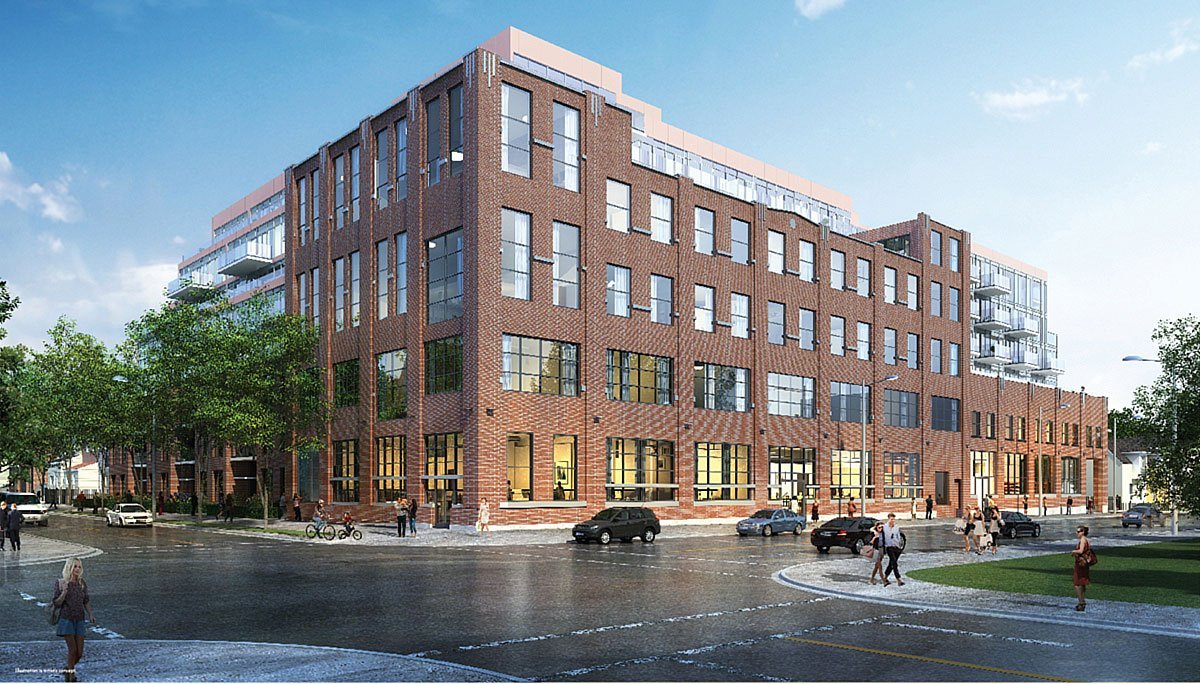 Originally a four-storey factory-style building, the development will add an additional five storeys, ultimately resulting in a nine-storey mid-rise. The building will be constructed in a U-shape, adding wings to the east and west portions of the site.

In total, Wonder Condos is expected to house 290 hard lofts, soft lofts, condos and towns ranging from 448 to 1,654 square feet. These units will be available in the following layouts; bachelor units,  one-bedroom, two-bedroom and three-bedroom. The factory’s high-ceilings lend itself well to desirable loft-style condominium units, while a selection of two-storey townhomes are proposed as well, flanking Booth and Logan Avenues and accessible directly from the street.

Over 13,000 square feet of amenity space will be incorporated into the project, comprised of 6,630 square feet of outdoor space on the building’s eighth floor, which will connect to the same amount of indoor amenity space on the ninth floor. A smaller zone for indoor amenities will also be included on the building’s ground floor, along with some commercial space. A three-level underground parking garage will house 315 parking spots for vehicles and 317 for bicycles.

The development will pay homage to an iconic piece of architecture, while creating a unique and compelling combination of old and new design. High ceilings, brick elements, a desirable rooftop terrace and a range of housing styles will make this a highly-coveted place to call home. 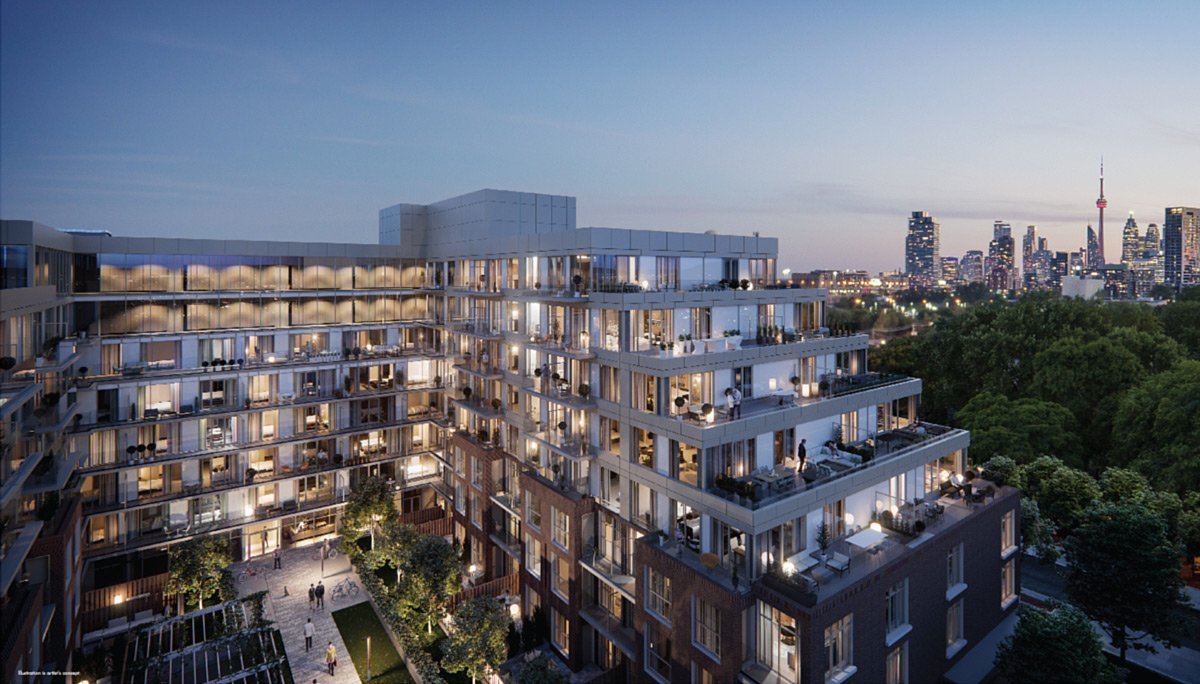 Condos in Leslieville are becoming more commonplace as developers respond to the needs of modern homeowners who are looking to call this friendly, east-end neighbourhood home. Its steps from what will be of the largest and most innovative new mixed-use developments the City has every seen – East Harbour.

The neighbourhood still retains its laid-back, neighbourly vibe, while an increasing number of eclectic retailers and eateries have brought a new wave of young professionals, creative types and families into the area. It’s a lively stretch where you’ll find local merchants, trendy cafes and increasingly more creative studios and other small businesses.

Leslieville somehow manages to seamlessly blend urban appeal with a rich history and makes an excellent alternative for those who crave a quieter place to come home to, but still appreciate easy access to downtown. In fact, it’s only a few minutes’ walk to the streetcar, which takes you into the city’s core in a mere fifteen minutes, as well as a bus route that connects directly with the subway’s line 2. With easy access to Lakeshore Boulevard and the Don Valley Parkway, getting around is easy for drivers too. This location has a competitive Walk Score of 85 and a Transit Score of 95, making it easy to get around.

An abundance of parks, schools and community centers makes it an ideal location for families, while urban explorers will love being within minutes of other trendy neighbourhoods like the Distillery District or the Beaches.

The developer has really been making a name for themselves with some of their innovative urban condominiums in Toronto lately. A private investment management company that specializes in real estate development, their portfolio is selective but impressive. From sleek high-rises to modern boutique buildings, they have a keen eye for location and pride themselves on being involved with all aspects of development.

This developer is an award winning developer with 40 years of experience in the GTA under their belt. They operate under president and CEO Robert Cooper, the youngest to have been afforded the Home Builders Association Lifetime Achievement Award. The company focuses on shaping the aesthetic of the districts they build and work work within. They strategically work from the outside-in when starting on projects, and this is approach is key to their different stages of development. 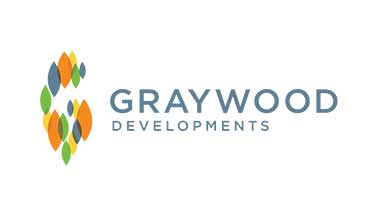 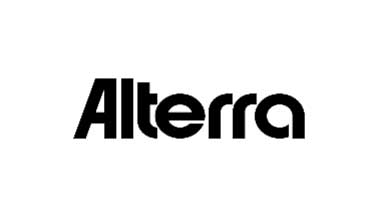