Imagine life in a luxury mid-rise condo, in a historic neighbourhood filled with family-friendly amenities. Imagine a fantastic investment opportunity adjacent to the Maple GO station. All of this can be yours at this pre-construction development by Pemberton Group. Indigo Condos, coming to Vaughan in 2019.

This project consists of a 10-storey building with 247 suites, as well as eight townhomes. Layouts will include one-bedroom, one-plus-den, two-bedroom and two-bedroom-plus-den styles, with dimensions ranging from 510 square feet to 1,590. The Quadrangle-designed building will have linear lines, with a contemporary brick and glass façade. Interiors designed by renowned firm Tanner Hill Associates will be stylish, modern and luxurious. 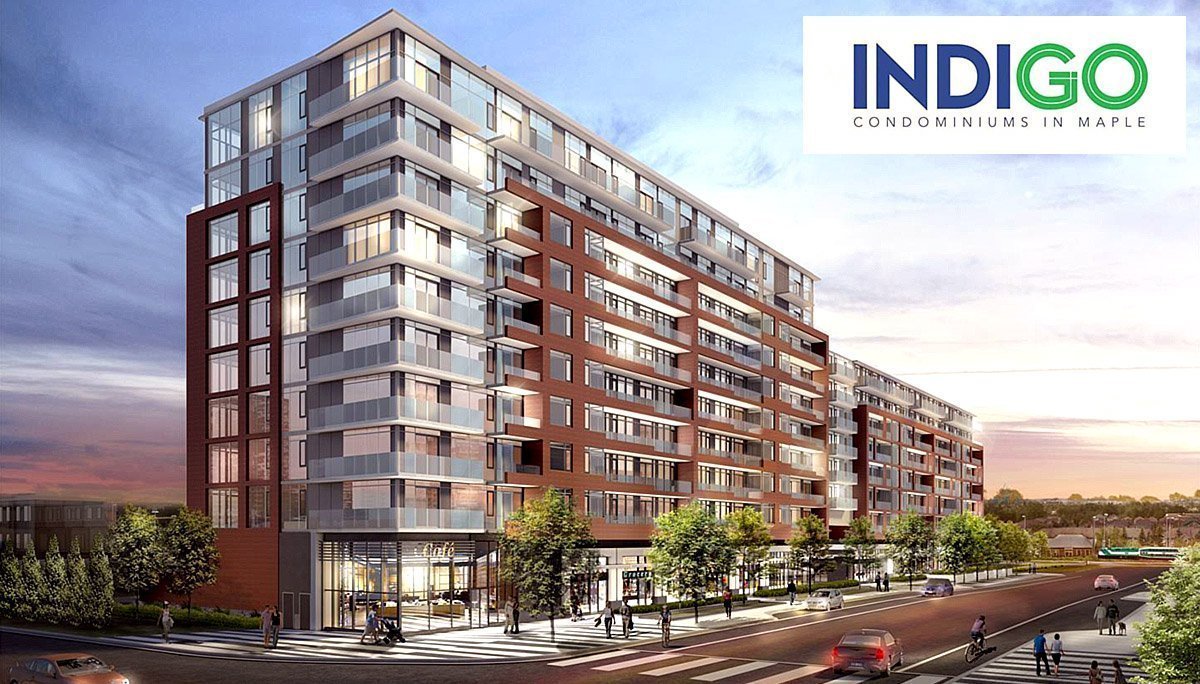 Inside each unit , you’ll find wide-plank laminate flooring throughout, with porcelain tiles in the bathrooms and kitchen. Nine-foot ceilings make the most of natural light. Kitchens come with full-size, stainless steel appliances, extra-tall, contemporary cabinetry and expansive granite countertops. You also get to choose from a selection of porcelain mosaic backsplash.

Inside your new bathroom, you’ll find a soaker tub and walk-in shower with a frameless, glass enclosure. A modern, mirrored medicine cabinet and chrome finishes complete the posh and private vibe. All units come with a balcony or walk-out patio and have access to underground parking and storage.

Designed to make a statement as soon as one enters, the lobby is a sophisticated and contemporary space, with luxe marble finishes and plenty of swank seating. It makes a great place to catch up with your neighbours or greet your friends before heading out for a night on the town. At Indigo condo building,  you’ll also find an elegant party room with a catering kitchen, bar, dining room and an abundance of lounge seating, encouraging your gatherings to spill late into the evenings. The party room boasts floor to ceiling windows and opens directly onto a ground floor terrace with a barbecue area, so your party can seamlessly move from indoors to outdoors.

The residents have access to a fitness room, yoga studio, steam rooms and an indoor hot tub, so costly gym memberships can become a thing of the past. A pet washing station and private cinema are also available.

One of the more popular amenities in Indigo condominium will likely be its ninth-floor terrace, a gorgeous outdoor space with dining tables, lounge seating around an outdoor fireplace and barbecue stations. Invite friends and family over for some freshly-grilled burgers, or relax with a glass of wine and a stack of your favourite magazines and watch the stars come out overhead.

This Vaughan condominium development is in a great neighbourhood for investors, commuters and families alike. At Indigo condo building, you’re adjacent to the Maple GO station, where getting to Toronto’s Union Station takes a mere 35 minutes. Moments from Highway 400, getting anywhere in the GTA is a straightforward commute, although with the local area’s amenities, staying in your neighbourhood is a pretty attractive option too.

Situated at Major Mackenzie Drive and Keele Street, this condo is in the heart of the historic village of Maple. Thought to be named for the stately Maple trees that lined Keele in the early 1900’s, the area’s natural beauty is now showcased by an abundance of ponds and parks, such as the Mackenzie Glen District Park, which features native plantings, sports facilities and a children’s village. It’s also home to the City of Vaughan’s Concerts in the Parks series, which is now in its 21st year.

The area is minutes from plentiful dining options, including lively pubs and live music venues, rustic Italian fare and plenty of coffee shops to refuel you. You’re also a short drive from Vaughan Mills where you can shop the day away at everything from big box retailers to specialty stores.

Take the family to Canada’s Wonderland, the country’s favourite amusement park, or the Reptilia Zoo, for a fun-filled and educational day. The community is also home to a roster of public facilities like the Vaughan Civic Centre and Public Resource Library, Mackenzie Richmond Hill Hospital and the brand-new Mackenzie Vaughan Hospital.

Maple has so much to offer and it’s easy to see why. With enviable transit, shopping, dining, community resources and a character-filled, neighbourly vibe, it’s a place that will appeal to residents for years to come.

Pemberton Group boasts more than 50 years of experience creating successful residential and commercial projects. With some of the GTA’s most coveted condominium residences to their name, they pride themselves on quality craftsmanship, luxurious touches and a knack for choosing up-and-coming neighbourhoods. From the quality of building materials to a wealth of lifestyle amenities, they design their communities to reflect an upscale quality of life.