Why Should You Invest In Mississauga Real Estate?

Mississauga has developed an urban skyline of its own, making it a great place to live. A boom in the construction industry has increased the sales of new condo units within its borders. The city is often called the ‘Gateway to Canada’, due to it being the home of the country’s largest airport, Toronto Pearson International, which sits in the North Eastern corner of the city. It has access to major rail corridors and three of the busiest highways in the country, which connect to the rest of the Greater Toronto Area.

Mississauga is a key national economic centre, second only to downtown Toronto as Canada’s largest employment centre, an incredible feat that can be largely attributed to Canada’s busiest airport, Pearson International Airport. 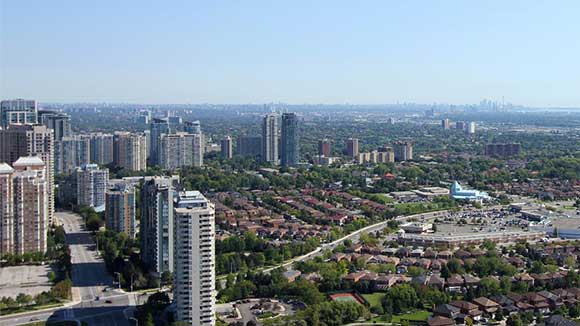 Processing some 47 million passengers in 2017 and responsible for handling almost half of all of Canada’s air cargo, Pearson is a major economic driver for Mississauga. Recognized for contributing as much as 6.3 percent towards the provincial Gross Domestic Product, this single entity is responsible for directly employing 49,000 workers and indirectly facilitating the employment of another 300,000 jobs throughout the province.

And yet, that’s not the end of it. Expected to become responsible for creating a potential 700,000 provincial jobs and a 8.5 Ontario GDP, local authorities are gearing up to turn Pearson into a “mega hub” by having it connected to more public transportation links. 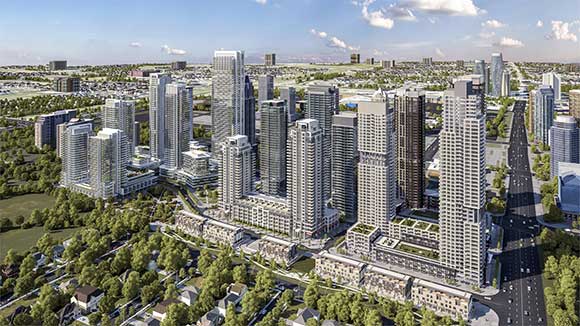 As a world airport with international influence, Pearson could then fulfill its full potential as the region’s economic driver, thereby bringing unprecedented economic benefit to surrounding cities such as Mississauga. As bright as its future may be, Mississauga’s strong economy is already full of employment opportunities.

More than 88,653 businesses in Mississauga employ over 428,309 workers. This single jurisdiction contains 1,300+ multinational firms, of which there are 61 Fortune 500 Canadian head offices located in the city's boundaries. As well, Mississauga is the 3rd largest FIRE (Finance, Insurance, Real Estate) cluster in North America. In fact, there are so many jobs in Mississauga that this city has become a net importer of jobs, becoming a target destination for some 30,000 workers commuting in from other cities. In 2016, Mississauga’s sky-high employment ratio of .56 signified that for every 100 residents, there were 56 local jobs.

In light of this robust economy, the Mississauga workforce has risen to meet the needs of their employers. Compared to both the provincial and national average, there are on average more Mississauga residents that are involved in industry sectors such as manufacturing, professional, scientific and technical services, and finance and insurance.

In the past 30 years, the city has grown immensely. Its population over that time has grown from 172,000 people to more than 721,599, making Mississauga Canada’s 6th largest city. This number will continue to increase exponentially due to all of the new residential condominiums being constructed, with some projections forecasting that the city will have 812,000 people by 2031. What’s more, Mississauga is developing faster than anyone can ever imagine, as it’s committed to lead the city into the 21st century. The median yearly earnings currently stands at $31,025, the household income is $72,657 and the median age is 40.

The average rental rate for the City of Mississauga is presently $2,200. This is in addition to a rental appreciation rate of 3.9% for the past 10 years. The demand for condos is still strong here as the vacancy rate currently sits at 0.8%.

Mississauga is an extensive Canadian city situated on Lake Ontario's lakefront. It sits on the north shore at the center of the Golden Horseshoe. Preservation of parks, public spaces and wooded areas are done through ingenious government and community partnerships.

It has more than 480 parks and woodlands for you to discover. You can enjoy a variety of recreational activities in serene surroundings such as the Credit River Trails, which allows for multitudes of activities like cycling, jogging, and walking for all age groups. Skating and cross country skiing is also available during the winter months.

The diverse communities bring a vibrant array of cultural markers from their respective motherlands. Stippled all over Mississauga, they include artistic work, types of cuisine, styles of building and other tangible aspects of culture that serve to provide alluring reminders of their various ancestral cultures. It has grown into a city that is envied by many around the world.

And while Mississauga is home to many local treasures, its crowning jewel would undoubtedly be its downtown core, site of one of Canada’s largest retail malls, Square One.

With 360 stores serving 24 million customers per annum, the advanced retail development represented by Square One is mirrored by the cultural achievements of downtown Mississauga’s other tenants: the Mississauga Civic Centre; the 5-storey tall Mississauga Central Library, one of the largest in the GTA; the Art Gallery of Mississauga; the 5,000 square-meter Celebration Square; and the Living Arts Centre, a multi-use facility for multiple arts organizations and home to a 1,350-seat theatre.

But Mississauga’s top institutions are just limited to retail and cultural spaces. As Peel Region’s most educated jurisdiction where nearly 38 percent of the adult population hold a Bachelor’s Degree or higher, Mississauga residents are getting prepared for the job by having a greater concentration of post-secondary qualifications than the national and provincial average. Locals are receiving their school at any of the 15 universities that lie within commuting distance, of which the local campus of the University of Toronto is responsible for enrolling some 13,500 undergraduate students studying in its 15 academic departments and 147 programs.

Projected to reach a population of some 812,000 people by 2031, this growing city continues to attract an increasing number of workers with a need for housing. And, with a motto that reads, "Leading today for tomorrow,” it’s clear that this vibrant city is one of Canada’s cities with a bright future.

Mississauga is bound by Milton and Oakville to the west/southwest, Halton Hills in the north-west corner, Brampton to the north, Toronto to the east, and Lake Ontario to the south/south-east.

Investments are pouring in, building more residential condos and commercial complexes, all the while improving the city's transportation in order to facilitate easy connections to the GTA. It is able to build up and modernize while preserving its natural beauty. Why not commit to purchasing your own humble abode? Don’t pass up on the opportunity to call Mississauga home.

There are many different transit options that are affordable and convenient ways of commuting within Mississauga. Presto is a GTA-wide, electronic fare card for public transit and is useable on all MiWay buses. All MiWay buses are kneeling buses equipped with ramps that allow passengers to board and exit the bus with ease. There are two wheelchair/scooter securement areas located on the front of each bus, .

Mississauga Transitway, is a dedicated transit passageway running parallel to highway 403 and north of Eastgate Parkway. It will provide east-west bus service supporting thousands of riders per day. It will offer a more dependable service by allowing buses to bypass congestion as they travel on a dedicated corridor, helping you get where you need to go faster.

The city is moving forward with the new construction and incorporation of the Hurontario LRT. The first phase of the transition begins with about half a dozen route changes. Ultimately about 45 of Mi-Way’s 85 routes will be affected. “Straightening” of the routes is part of Mississauga’s five-year plan. Once the grid is more streamlined, the payoff will be quicker and more reliable trips with longer service hours.

Mississauga is building for the future in a way that makes sense, by honouring their founding communities and preserving the character of the neighbourhoods they love. Although it may be considered suburban living, it goes without missing out on urban conveniences.

Mississauga is excellent at expanding as a successful city with a lot going for it. People from around the world are attracted to it for its high quality balanced lifestyle, services, excellent programs and leisure options, as well as its welcoming atmosphere. 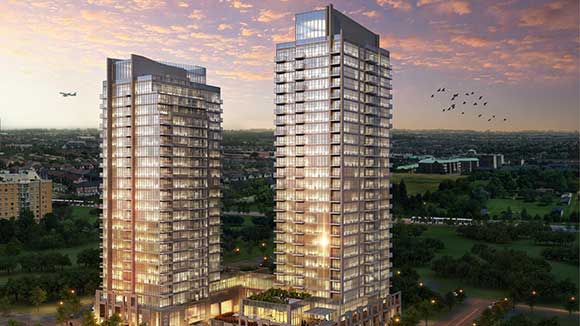 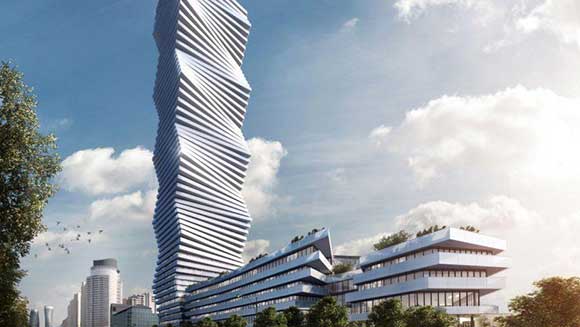 How do I know which suites I can afford?

To determine what you can afford, we recommend you to speak to one of our Sales Representatives for the condo development you’re interested in. We will discuss your wants and needs and will determine the right fit for your needs. We are equipped to help you figure out what you can afford and present you with suite options that align with your budget.

How can I trust that the condo I’m buying will meet my expectations?

If you’re purchasing your condo from a widely respected developer during the pre-construction phase, we will do our best to meet your expectations. Take your time to explore the presentation suite at the sales centre, look closely at the floorplans, finishes, and amenity renderings and don’t hesitate to ask questions. You can even visit other buildings by the same developer to see what they’re like and get a feel for the style and atmosphere to see if it suits you. Again, our guidance and knowledge backed by years of experience ensures that the suite you’re purchasing and the building amenities will align with your vision.

Will my deposit be protected?

A typical deposit for a pre-construction condo suite for a Canadian buying from a builder is 20% of the purchase price. Even though your deposit is fully protected by the Condominium Act, it’s always a good idea to ask the developer what other rules and approvals they have in place to prevent fraud and ensure your deposit is completely secure. When buying a pre-construction condo from a reputable developer, your purchase fees will include a Tarion Warranty Corporation enrollment fee that provides deposit protection of up to a maximum of $20,000. This way, in the unlikely event that the condo project is not completed, the financial loss will be less significant.